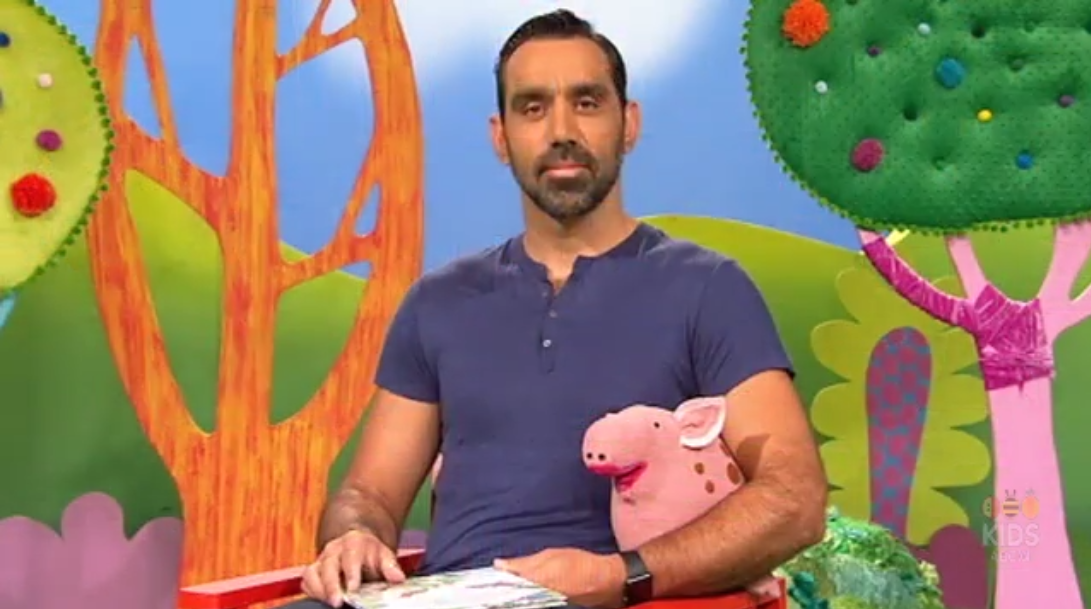 Former AFL champion Adam Goodes has made his debut on celebrated Australian children’s program Play School, and he really got into the role.

Goodes, 36, appeared on the ABC program this week as part of Play School‘s 50-year anniversary celebrations and looked surprisingly comfortable.

The two-time Brownlow Medalist and AFL premiership star with the Sydney Swans made his name playing one of the world’s most aggressive sports, but during Play School Goodes showed a rarely-seen gentle side.

During his segment, Goodes read the book Counting Aussie Animals In My Backyard by Bronwyn Houston.

“Hey there, my name is Adam,” the 2014 Australian of the Year said with a wide smile and soft slow voice. “I wonder if we will see my friend Slush in there [the book]?”.

“Slush” referred to the soft toy pig resting on Goodes’ lap throughout the segment.

And to be fair, most kids watching Play School were probably not old enough to have seen the champion midfielder/forward dominate the AFL.

As soft piano music began to play, Goodes opened the book and read: “One. One python slithers through the plants.”

Goodes went onto read through the book, counting different animals on the page up to number 10.

During the reading Goodes counted frogs, ants, kookaburras and lizards. But the kookaburra was the highlight of the reading.

“Have you ever laughed like a kookaburra?” Goodes asked.

He then mimicked a kookaburra’s laugh with his eyes closed and head tilted high in the air. “Koo koo koo koo koooooo,” he roared.

It’s not the first time Goodes has popped up after his retirement from football at the end of the 2015 season.

He was involved in a David Jones ad campaign and became a consultant for the retail outlet on indigenous affairs.

Goodes also got engaged in April 2016. He will marry his girlfriend Natalie Croker after proposing to her over the Easter weekend.

The 372-game veteran was just one of many famous Australian faces set to appear on one-off segments of Play School.