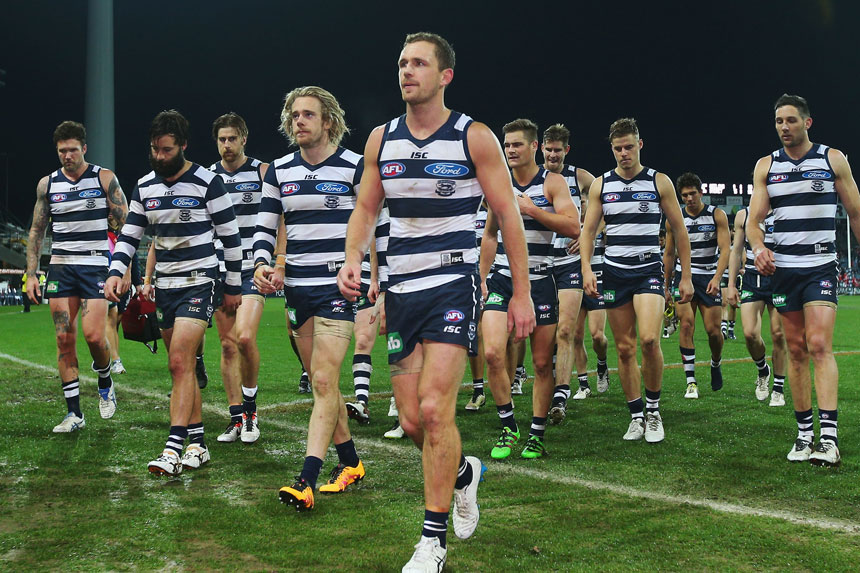 The addition of star Patrick Dangerfield was always expected to improve Geelong.

How much, though, remained in doubt – after all, the Cats missed the finals last season.

But a 43-possession haul against Hawthorn on debut showed Dangerfield would have no problems settling in at his new home and their defeat of the three-time defending premiers on the same day quickly had us crowing about the Cats.

The wins kept coming for the Cats – and so did premiership favouritism.

Dangerfield and Joel Selwood were dominating in the midfield, with the former’s arrival freeing the skipper of his weekly tag.

The benefits of that were obvious in Selwood’s form, and youngsters Cam Guthrie and Steven Motlop were also thriving.

Throw in the ever-reliable defensive trio of Corey Enright, Harry Taylor and Tom Lonergan, Tom Hawkins and Daniel Menzel up forward, and Zac Smith in the ruck, and you can see why everyone was so taken by Geelong.

They won seven of their first eight games but when a surprise 24-point loss to Collingwood was followed by another shock defeat, alarm bells started to ring.

Carlton simply wanted it more than Geelong in that Round 10 clash at Etihad Stadium, with the club’s younger players particularly poor.

A trio of wins followed, but successive losses to St Kilda and Sydney – the latter at the club’s Simonds Stadium fortress – have the spotlight back on the club’s youth.

But they can’t do it all and too many players are going missing when games are on the line.

Guthrie and Motlop have shown regular glimpses this year but aren’t consistent enough, especially Motlop, and just how good Tom Ruggles and Jordan Murdoch are remains under question.

Geelong’s reliance on their elder statesmen has been clearly evident in their record against lower-quality teams.

Carlton and St Kilda, who both won’t make the eight this season, made the Cats younger players look pedestrian with their constant pressure.

And if they can’t thrive in pressure during the regular season, what hope do they have in the finals?

Sure, Geelong will continue to win plenty of matches before the finals with Dangerfield and Selwood dominating.

But if they are to go deep in September, several others are going to have to step up.

Don’t be surprised if he tries to send a message at selection this week.

This is the ongoing problem with Geelong