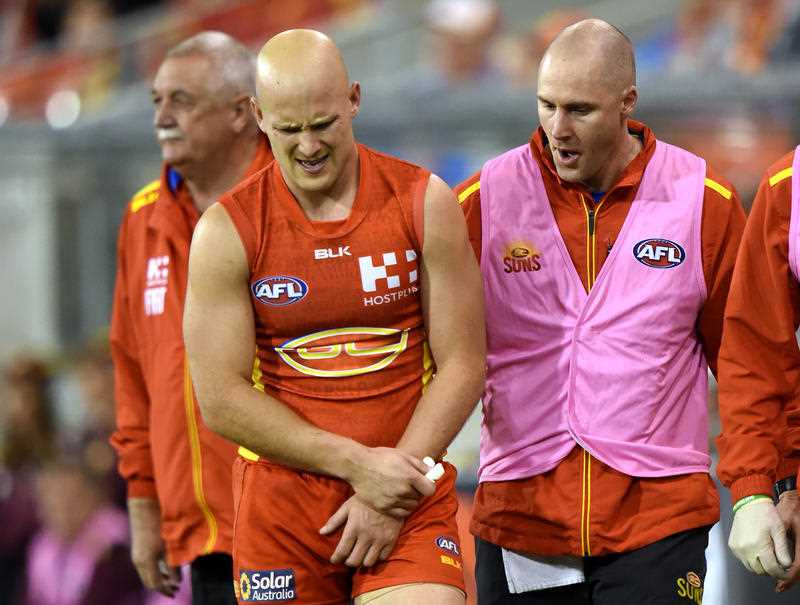 Gold Coast has copped a savage injury blow with both Gary Ablett and Michael Rischitelli to miss the rest of the AFL season due to injury.

Scans have confirmed Ablett needs more surgery on his troublesome left shoulder, while Rischitelli is set for 12 months on the sidelines after rupturing the anterior cruciate ligament in his right knee.

Both players suffered the injuries during Saturday’s Q-Clash win over Brisbane at Metricon Stadium.

• This is the ongoing problem with Geelong
• Eagles beat Kangaroos, Saints edge out Bombers

The injury news comes at a devastating time for both players and club.

Until the derby victory, Ablett, 32, was enjoying his first season without major injury for three years.

Doubts will linger over the champion’s ability to reach his best again, after battling foot, shoulder and knee complaints in recent campaigns.

The dual Brownlow Medallist said he was annoyed to spend more time on the sidelines just as the Suns’ form was improving.

“It’s frustrating that I will miss the rest of the year, in particular after we’ve worked hard to get back to playing a much more competitive style of footy,” Ablett said.

“Initially we thought it mightn’t have been as bad but scans today confirmed he’ll miss the remainder of the year,” he said.

“It’s clearly a very disappointing result for Gary and the club but we will make sure Gary gets the surgery and treatment required to ensure Gary returns in 2017.”

Rischitelli’s ACL will require reconstructive surgery, meaning the 31-year-old won’t be seen on-field until mid-season next year, putting his career in doubt.

Ashcroft said the club expected Rischitelli, who was playing game 100 for the Suns, to play on despite the blow.

“He’ll miss the rest of this year and a little bit of the pre-season coming up,” Ashcroft said.

“He has really been the heartbeat of our club for many, many years so the plans we’ll put in place for `Rischa’ will see him get back and play next season, we’re pretty confident of that.

“He’s contracted for 2017 and we’re looking forward to him playing many more games with the football club.”