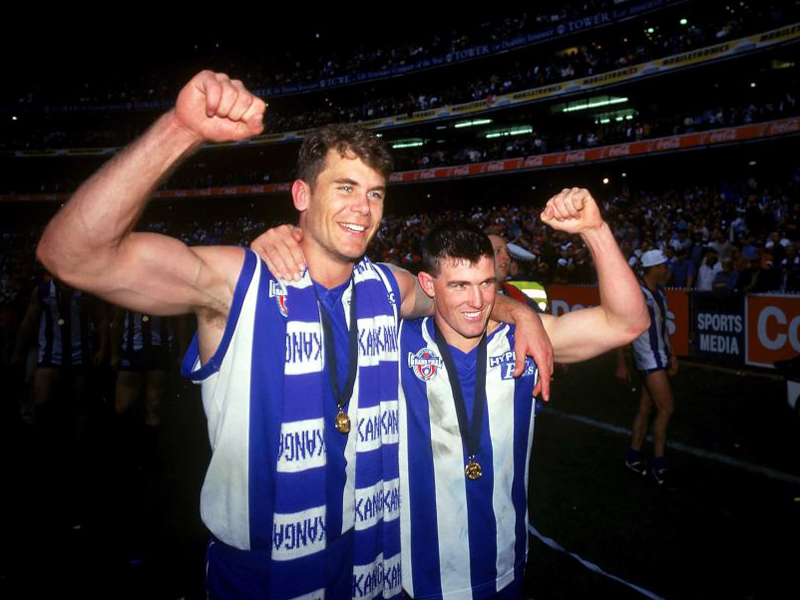 Former North Melbourne captain Anthony Stevens displayed a team-first mentality when he took the field for his beloved Kangaroos and continues to demonstrate the same approach off it.

In agreeing to sit down and break bread with former team-mate Wayne Carey ahead of the club’s 20-year premiership reunion, Stevens showed the selflessness that characterised his football career.

He simply was not comfortable that his bitter relationship with Carey, stemming from an affair with Stevens’ ex-wife Kelli, had the capacity to detract from the celebrations.

Speaking to the ABC as part of a feature on the 1996 grand final, Stevens said he would never forgive Carey but he felt good after a meeting between the two when he received an apology.

“I was happy afterwards. I mean, the biggest thing is that you want to see the boys and the club benefit out of the whole scenario,” he said.

“So to chuck away that bitterness and get over the whole scenario was really good and to move on.”

But moving on does not mean granting forgiveness.

“So I’ll never move on from that, which I explained that to him, but that’s in-house stuff between Wayne and I.”

Kangaroos will want controversial Carey back in the fold

After news of the extra-marital affair emerged in 2002, Carey left the club and played out his career with Adelaide.

Stevens, who now works in coterie and player relations at the Kangaroos, hopes the easing of tensions will lead to the dual premiership captain re-connecting strongly with North Melbourne.

“Wayne can get back and be involved and he’s the greatest player to ever play at this football club,” Stevens said.

“So it’s something I know the North Melbourne football club would love to have him back involved at the footy club in regards to some branding and sponsorship opportunities and what it can bring to the football club, because he is a huge identity in the footy world.”

Stevens’ premiership team-mate and close friend, Glenn Archer, helped facilitate the pair’s reconciliation. He paid tribute to Stevens for his strength in seeking out Carey ahead of last weekend’s celebrations.

“It was just great to have all the boys back together in a room having a laugh again without as much tension in the room because we’ve had other reunions and they haven’t been that good,” Archer said.

“It was up to Stevo to catch up with Wayne and a lot of people wouldn’t do it after what’s happened. Stevo, being the bigger man, got in the room and got it done and it was great for the weekend because everyone had a ball.”

In conjunction with the 1996 premiership reunion, Stevens was officially recognised as a legend of the North Melbourne Football Club. It is not hard to see why.