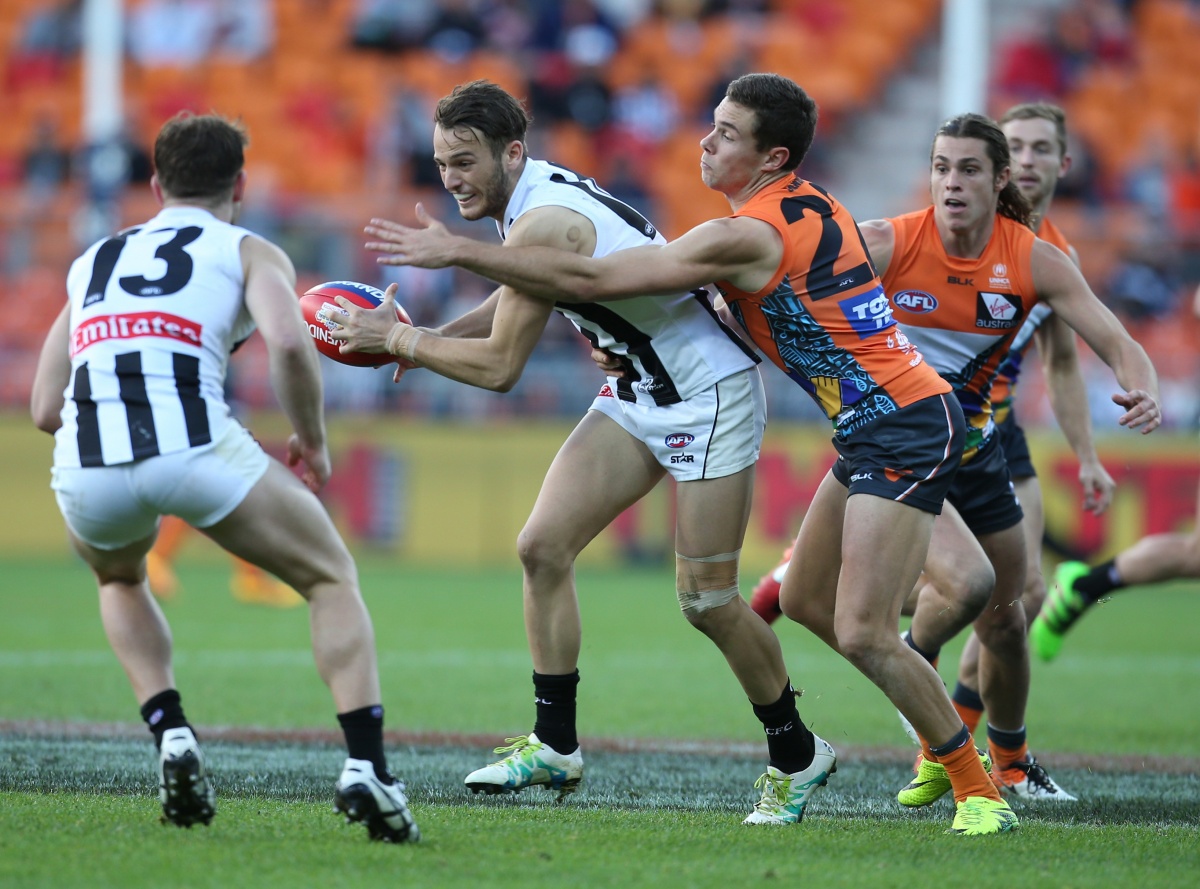 Such a triumph may have been better for Collingwood earlier in their AFL season, but coach Nathan Buckley says he’ll take a 32-point upset of Greater Western Sydney any time of the year.

A dominant second quarter on Saturday sparked an extraordinary Magpies resurgence to overrun the Giants 19.11 (125) to 14.9 (93) and shatter their perfect Spotless Stadium record.

It was the Pies’ third-straight victory and leaves them 7-8 with seven matches remaining.

“You can only look after what’s going on right now and it was a really positive performance,” Buckley said.

“It was the type of footy that, for the most part, we like to play.

“The first quarter was a little bit shy of it and we were sloppy in the last, but the second and third quarters were dominant.”

The Giants’ failure to showcase their top-four credentials on home turf means they slide to fourth spot and are at risk of slipping further down the congested top eight.

Not that the crowd of 13,483 would have known it was coming after an opening term in which the home side ruled in all the major statistics.

Early signs were ominous for the Pies, who struggled to deal with the Giants’ superb ball movement, which yielded a 24-point lead at the first break.

Shane Mumford looked set for another cracker, imposing himself with 11 first-quarter hitouts.

But where Mumford shone in the first term, it was his ruck counterpart Brodie Grundy who reigned in the second and became pivotal in the victory with a total 28 hitouts, 26 disposals and one goal.

“Mumford was on top of Brodie and they were just able to score from stoppage too easily … Brodie’s last three quarters against his direct opponent were as good as he’s played.

“He’s in a sweet vein of form at the moment so it’s good to see him get reward for effort.”

The Pies piled on nine goals in the second quarter to execute a stunning 42-point turnaround and lead 76-58 at halftime.

Former Giants Adam Treloar (27 disposals) and Taylor Adams (31 disposals) led the charge, which only ballooned as the match continued and the hosts’ momentum nearly ground to a halt.

An eight-goal run lifted the Pies to a 30-point lead during a third term underpinned by direct and efficient play.

But Buckley’s outfit kept the pressure on, twisting the knife with 20 more tackles overall than the Giants and outdoing them by nine clearances and 13 contested possessions.

“They were clearly too good for us,” Giants coach Leon Cameron said.

“We obviously haven’t returned after the bye in the shape we needed to.

“But Collingwood, to their credit, after quarter-time were just too hard for us.”