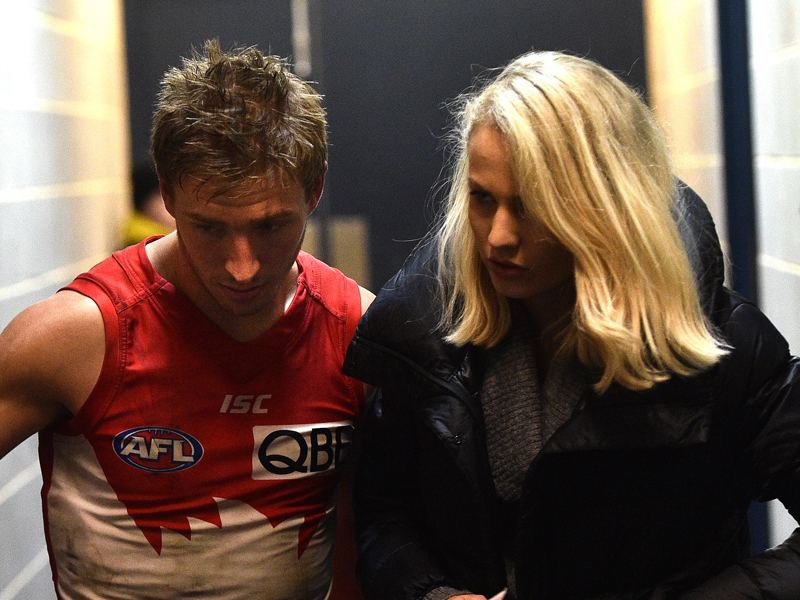 On the eve of his 200th game, Sydney Swans star Kieren Jack was thrust into the spotlight when a family drama involving his girlfriend, his mother and his father became public knowledge.

Less than a minute into last night’s game against Geelong, Jack showed he was able to put the personal turmoil behind him when he scored the opening goal.

Sitting in the crowd was partner Charlotte Goodlet, who wept tears of joy over the moment.

Jack ended the night with a game-high three goals and 24 possessions before being joined in an emotional post-match huddle by his younger brother and teammate Brandon, who was an emergency for the clash at Simonds Stadium.

After the match, Sydney coach John Longmire said it was time for everyone to move on after his co-skipper Jack ended a tumultuous week with a key role in the Swans’ 38-point win.

“It’s been well written and documented and I think everyone is over it to be honest.

“I think we all need to move on from it.

“The players obviously supported him and Brandon in a really strong way but in the end I think it’s time that everyone moved on.”

The Swans dominated the midfield battle and also got great returns from a number of their youngest players including defenders Callum Mills and Aliir Aliir.

“From the first bounce I thought we played a really good, strong brand of footy,” Longmire said.

“They came at us a bit in the second quarter but I thought our leaders were sensational and our kids were super tonight.

“Someone told me before we came in that we had four (players who had played) under 10 games and eight under 30.”

Aliir’s ability to hold down a key defensive position allowed Longmire to keep regular fullback Ted Richards in the forward line for the entirety of the match.

“We were hoping by now that Sam Reid would be back but he’s not and with Kurt (Tippett) out as well we thought we needed another tall, particularly down here on a longer ground,” said Longmire.

“Ted hasn’t played a lot of football recently as a forward but he did as a young fella.

“He knows his stuff and he played a role for us.

“He had three shots at goal and was just another marking target in our forward line.”

The Swans will draw level on points with ladder leaders Hawthorn if they win Thursday night’s huge clash at the SCG.