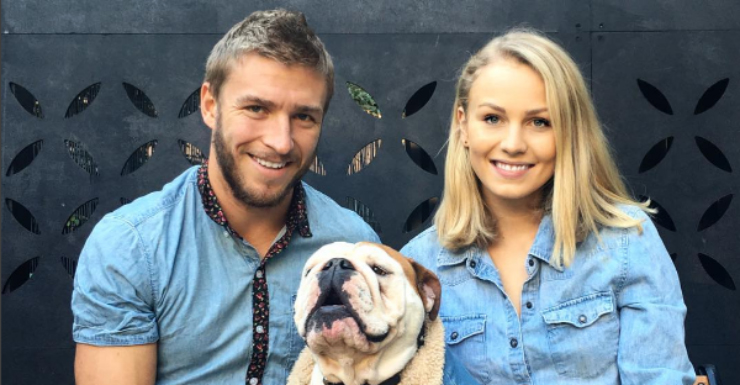 An AFL star and his model girlfriend in a public spat with his parents – one of whom happens to be an ex-rugby league great – ahead of one of the most important games of his career.

That’s the type of scoop, however tawdry, that sends footy diehards and non-sports fans alike into a ‘click frenzy’ and clamouring for the front and back pages.

The story grew legs after Donna posted on Twitter: “@kjack_15 so sad. Dad 200 RL [rugby league games] you 200 AFL [games] & you don’t want us there, your parents. No appreciation for all the yrs helping you get there.”

It has developed into a midweek mini-juggernaut, dominating Australian news cycles – and completely overshadowing Kieren’s milestone match, which doubles as a top-four blockbuster – as members of the Jack family consented to interviews, staged press conferences, and posted on social media.

An inevitable spinoff has been widespread criticism of the media’s reporting of the story.

Firstly, that a story of this gossipy nature is being peddled by mainstream media at all, and secondly that the Jack family should be afforded the courtesy of being able to deal with the matter privately.

To address the former argument, news is audience-driven.

For every person that looks down their nose at soap opera-esque stories getting airtime, there are 50 who find them irresistible.

Kieren Jack may not be one of the AFL’s genuine superstars, but as the Swans’ captain, a 10-season veteran, a 2012 premiership player and a 2013 All-Australian selection, he commands a high profile.

Garry Jack ranks among the finest rugby league players of the modern era, representing Australia in 21 Tests and NSW in 17 State of Origin matches, and the proud dad has been a prominent public presence throughout his son’s admirable career in a rival code.

Anyone who has followed Kieren’s career would have expected a media appearance or two from Garry during the week of one of his son’s crowning achievements, such has been Garry’s tendency towards the limelight.

The fact that Charlotte Goodlet has a profile outside of being the partner of a well-known footballer gives the story an extra edge.

It may not be highbrow by any stretch, but – for the same reason any number of scandals involving athletes or public figures garner massive publicity – the vast majority find it fascinating.

But the heart of the matter – and the clear cause of the story maintaining its momentum – is that the Jack family surrendered its right to deal with the matter privately when its members repeatedly fanned its flames in public.

Most of the blame lies with Donna Jack.

Whether her inflammatory tweet (which including Kieren’s handle, alerting his 20,000-plus followers) was designed to grab her son’s attention, that of the wider public, or both, it achieved all of the above.

While the tweet was deleted and Donna’s account made private, it was far from a one-off; she posted this in March: “@kjack_15 @sydneyswans isn’t it time as captain you practised what you preach. Family is what gets you there, don’t [sic] ever forget that.”

Garry got in on the social media act as well, tweeting his support for his wife’s comments, while he also granted News Corp an interview midweek in which he outlined his anguish over the quarrel and revealed he hasn’t spoken to Kieren’s brother Brandon, a Swans fringe player, in over 12 months.

Mate sorry for delay I have just got home from training.
The only thing I will say is that I support my wife comments and we are a family…

Garry and Donna’s third son, Rhys, has also weighed into the maelstrom via Twitter during the week.

For his part, Kieren may have felt he had no choice but to front the media. And the 29-year-old has come out looking like the good guy – chivalrous for defending his lady, and honourable for refusing to resort to name-calling.

Diplomatic as he may have been, however, Kieren has provided the story with more fuel.

Why Australia is loving the Jack family spat