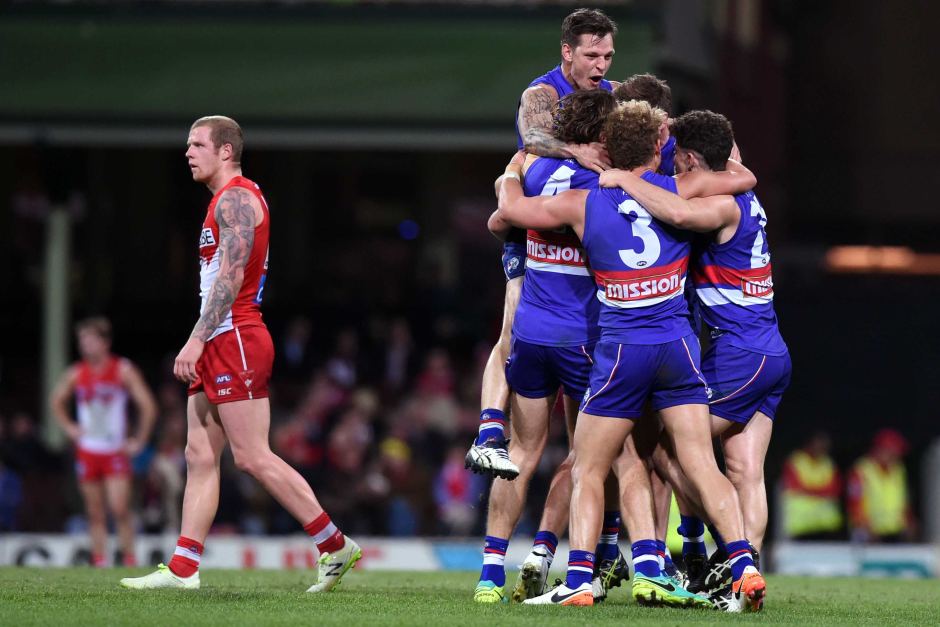 A Jason Johannisen goal with two seconds remaining has sealed a four-point win for the Western Bulldogs and denied Sydney a place at the top of the AFL ladder.

It was the Bulldogs’ return to the ground for the first time since their epic win in round five last season.

Johannisen was surprisingly quick off the half-back line in his first match since tearing a hamstring tendon 11 weeks ago as the visitors kept plenty of numbers behind the ball to restrict the Swans’ movement.

It was an effective tactic that helped former Swan Shane Biggs kick the game’s first goal from outside 50m.

Although Lance Franklin (five goals, 21 disposals) and Jarrad McVeigh steered the hosts to the lead at the first break, the Dogs surged ahead via a three-goal second-quarter flurry within the space of four minutes.

That included two from Jake Stringer within 80 seconds, his second an explosive snap shot on a sharp angle that would rate as one of the goals of the season.

Franklin ensured the Swans didn’t trail for long, matching Stringer at his own game with two of his own majors in as many minutes.

The contest had opened up, but it spelt trouble for the Swans.

The Dogs stepped up their inside 50 efficiency to snatch a 13-point edge in a dominant third term, Tom Liberatore scoring two of five unanswered goals and having a hand in the other three.

That was despite Luke Parker’s impressive performance which included a match-high 34 disposals and 23 handballs.

For only the second time this campaign, the Swans were behind at three-quarter-time.

Franklin rammed home two rapid goals to claim a one-point lead that was soon extended to a shaky three points.

And under pressure, with the full-time siren threatening to sound, Johannisen stepped up for his moment.

The win lifts the Bulldogs to fifth place while the Swans remain second behind Hawthorn.

Meantime, a Scott Pendlebury masterclass has helped Collingwood edge their AFL nemesis Carlton with a 12-point victory at the MCG.

The last edition of the game’s oldest rivalry was a match of high intensity, if not high scoring, tailor-made for defenders.

A lack of in-form forwards for both sides meant the match regressed into a desperate scrap at times, with Collingwood finding enough scoring power from midfield.

Brodie Grundy and Jarryd Blair kicked two goals each for the Magpies, with only Bryce Gibbs tallying two for Carlton.