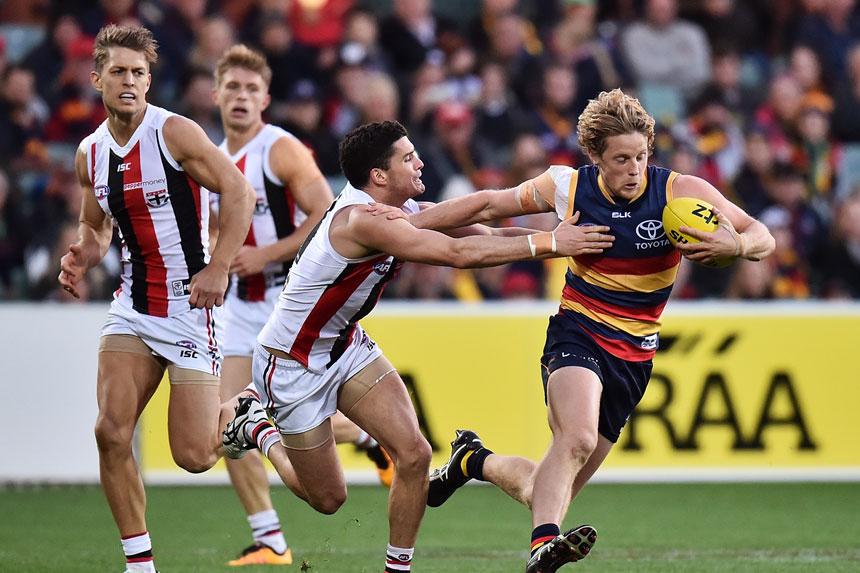 Rory Sloane is enjoying his best year of football.

He is averaging a career-high 24.9 disposals per game and has helped to fill the large void left in the Adelaide midfield by Patrick Dangerfield’s departure.

It’s a void that many thought wouldn’t be filled.

Most experts had the Crows sliding out of the top eight after losing their superstar midfielder to Geelong.

But Sloane has thrived in his absence, moving himself into the elite bracket of midfielders in the competition.

And while Dangerfield is surely leading the Brownlow Medal at this stage, Sloane seems his nearest rival and will not face the competition for votes his rival does from Joel Selwood.

You only have to look at Sloane’s game against North Melbourne last week to ascertain what sort of player he has become – and how valuable he is to the Crows.

He had 30 disposals, laid 13 tackles and willed himself to every contest to play a key role in a stirring 33-point victory.

It was the third time he has amassed 10 or more tackles in a match this year and his 95 in 2016 are only bettered by three players (Liam Shiels, Andrew Swallow and Matt Priddis) in the competition.

He has won more disposals than the aforementioned trio and has particularly lifted in the last six weeks, where he averages 27 touches a game.

Dangerfield’s departure demanded a player such as Sloane stepped forward if the Crows were maintain their current standing.

And he has done it superbly.

His form is one of many reasons for Adelaide’s continual rise in 2016, with Taylor Walker, Daniel Talia, Josh Jenkins and Jake Lever all playing their part.

After a slow start, Walker has kicked 17 goals in his last five games and Talia is on his way to another All-Australian spot in defence.

Another exciting, young defender in Lever has really caught the eye in 2016.

And in Jenkins, the Crows have another bona fide forward option to help share the load on Walker and goal sneak Eddie Betts.

The former Essendon man has 38 goals in 13 matches this season and shapes as a key re-signing for the Crows with several clubs sniffing.

Add in Sloane’s continued brilliance and Adelaide are a side most clubs would prefer to avoid in September.

While Dangerfield has announced himself as the game’s best midfielder in 2016, I’ve been pondering lately.

Who is more valuable to their team – Sloane or Dangerfield?

Both are gut-runners who never stop, although Dangerfield has his rival covered for that initial burst of speed that makes the likes of Jack Steven so watchable.

Sloane is a better tackler, and while you would think the Cat is more dangerous in front of goals, he has only kicked four more than the Crow this season.

Dangerfield has had more stand-out performances but Sloane really shapes as Adelaide’s barometer.

I think I’ll have to go with the Cat at the moment, but I’m praying the two sides meet each other in the finals this season.

What a treat it would be to watch these two elite midfielders go head-to-head when it really matters.

The 2016 Brownlow Medal is far from over