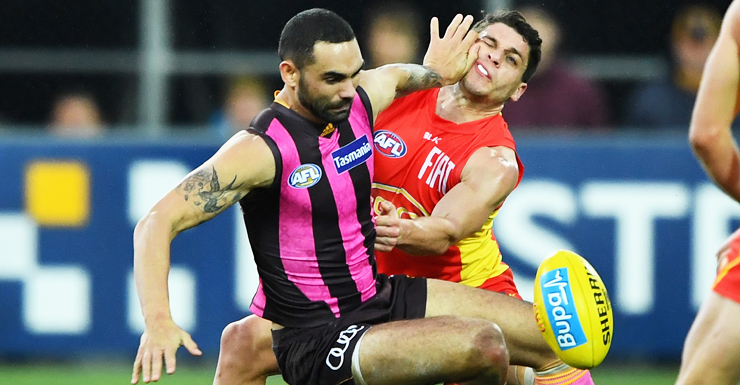 Hawthorn have overcome a lacklustre start to record a 26-point victory over Gold Coast.

It was the Hawks’ 11th win of the year and reinstates their ladder-leading position, but it was far from smooth sailing against the struggling Suns.

Jack Gunston goaled within 15 seconds of the first bounce in what was to be the Hawks’ sole glimpse of dominance early in the game.

By contrast it was an impressive opening quarter from the upbeat Suns who took a 15-point lead into the first break, putting the Hawks on edge.

Some typically colourful guidance from coach Rodney Eade spurred on the Suns who stretched their margin to 21 points early in the second quarter.  But by the main break the premiers had reeled in the lead to just one point.

Steady drizzle made for a greasy contest as the Hawks regained the lead nine minutes into the third term.

The Suns started to fade and finished the quarter goal-less while the experienced Hawks took comfortable control.

James Sicily was a standout for the Hawks, finishing with three goals and 13 disposals.

Captain Luke Hodge made his much-anticipated return, showing no ill effects of the knee injury that had sidelined him for weeks.

Hodge started Sunday’s game at half-back, playing with a guard on his right forearm, presumably a hangover from his round-one injury.

A hard hit early in the game prompted Hodge to call for the first of several interchanges, in a sign the club are committed to carefully managing the stalwart’s return.

He was gone for only a few minutes each time.

Gold Coast skipper Gary Ablett was his usual handy self for the Suns, recording 40 disposals and booting a goal, but didn’t have a blinder which is probably what Gold Coast needed if they were to produce an upset win.

Forward Tom Lynch was impressive for the Queensland outfit, finishing with three goals and 17 disposals.

Sam Mitchell was his ever-reliable self, with 35 disposals and winger Billy Hartung came off the bench as a valuable allrounder with a two-goal performance.