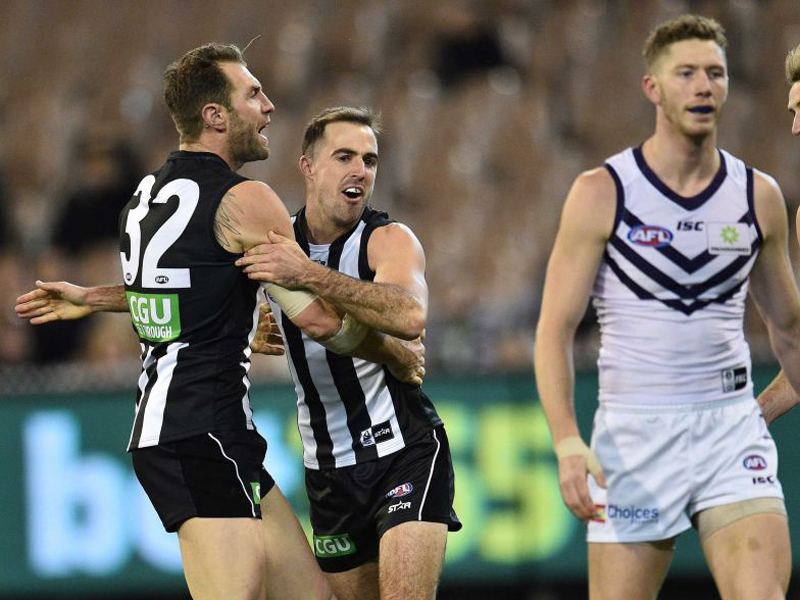 • Newman unloads as Wilson and McGuire make peace
• Eddie and James: sorry, but this is why it’s time to go
• McGuire and Co show they’re ‘sorely out of step’

The Dockers were a shadow of the team that had won their previous three matches after starting the year with 10 straight losses.

The weather, combined with Collingwood’s poor form leading into the game and the closure of the MCG car parks because of the extended wet spell, all contributed to the low crowd.

Defender Ben Reid was solid all night for Collingwood, while at the other end Dockers counterpart Sam Collins impressed in his fifth match.

Fremantle only kicked 1.4 to half-time – their equal-lowest score in the first half since Ross Lyon took over as coach before the 2012 season.

They rallied with two goals to nil in the third term and when captain Matthew Pavlich kicked his second goal at the start of the last quarter, the margin was only 22 points.

But Collingwood went on a five-goal tear to put the result beyond doubt.

Dockers forward Jack Hannath had a terrible night, with two glaring errors in the third term.

Magpies win in front of worst crowd in 76 years