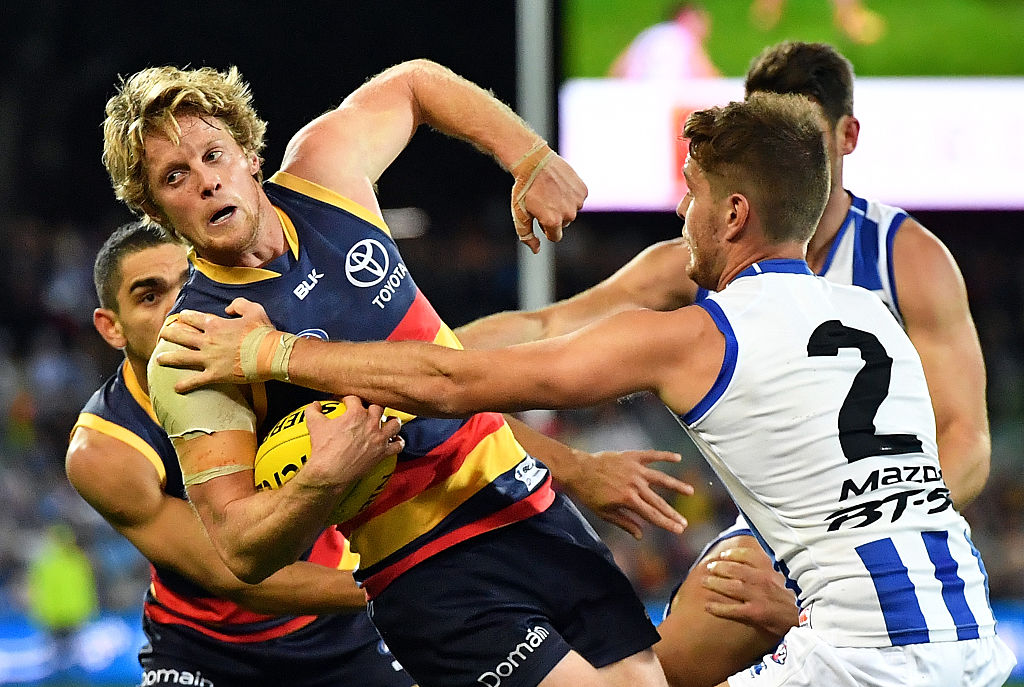 A fast-finishing Adelaide steamrolled a flagging North Melbourne by 33 points on Thursday night to bank a fifth consecutive win of the AFL season.

• Wilson fires back at ‘Neanderthal’ Newman
• Eddie and James: sorry, but this is why it’s time to go
• McGuire and Co show they’re ‘sorely out of step’

But the Roos, who entered the game with just six days’ rest, were overwhelmed in the final quarter by the Crows, who enjoyed their bye last weekend.

And their fresher legs then proved decisive, Adelaide kicking four majors before the Roos scored a late consolation goal – the Crows had 14 scoring shots to two in the final stanza.

The home side had earlier failed to capitalise on their dominance, kicking 3.8 to 1.2 in the first quarter before a crowd of 37,890 – the lowest for the Crows at Adelaide Oval, with many spectators scared off by forecast thunderstorms which didn’t eventuate.

The misses proved costly in the second stanza when North found fluency.

The Kangaroos, with Jack Ziebell (24 disposals) and Ben Cunnington (26 touches) influential, booted five goals to one to take a four-point advantage into halftime.

The finals aspirants then went toe-to-toe in the third quarter, with Adelaide goalsneak Betts booting two of Adelaide’s four goals to help his side to a 8.18 to 9.6 lead at the last change.

The Crows then powered to a ninth win of the season – one less than North, who lost utility Farren Ray to concussion in the opening term.

Crows too good for faltering Kangaroos