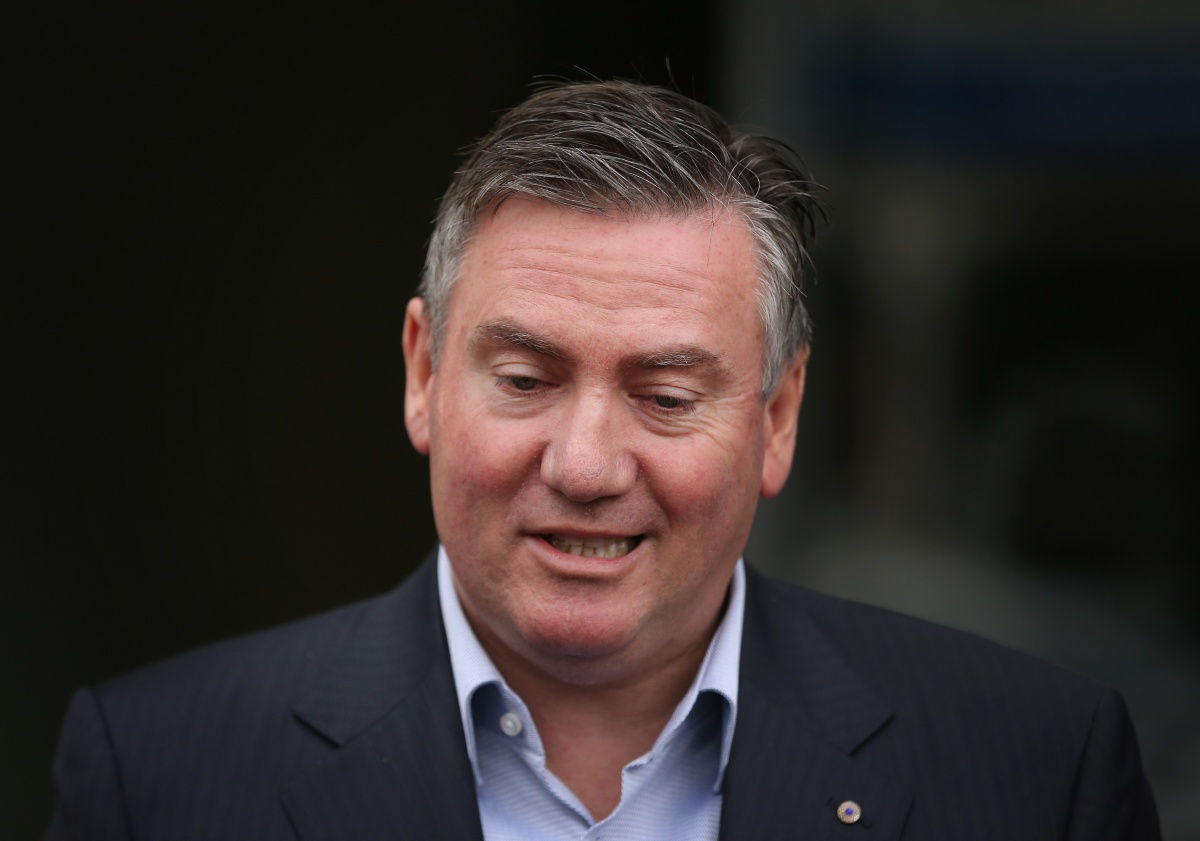 Just when it appeared an end was in sight for the continuing furore surrounding Eddie McGuire’s on-air sexist comments about journalist Caroline Wilson, one of the Collingwood president’s friends came along and fanned the flames.

Hours after Wilson appeared to have made peace with McGuire during an hour-long telephone conversation on Wednesday, Channel Nine personality Sam Newman used The Footy Show as a platform to accuse her of double standards, calling her an “embarrassment”.

McGuire has been the subject of intense criticism this week after he “joked” in a June 13 Triple M radio segment with co-hosts James Brayshaw and Danny Frawley about drowning Wilson while talking about The Big Freeze, a charity event where football personalities go down a slide into freezing water.

• Magpies support McGuire as club president
• Eddie and James: sorry, but this is why it’s time to go
• McGuire and Co show they’re ‘sorely out of step’

McGuire, Brayshaw and Frawley issued apologies, but the fallout continued, with Collingwood sponsor Holden re-evaluating its partnership with the club, and condemnation from all quarters, including the Prime Minister.

On Wednesday’s AFL Footy Show, with Brayshaw looking on, Newman portrayed the controversy as little more than a spat between Wilson’s radio station 3AW and Triple M.

Describing McGuire as a “friend of mine”, Newman said Wilson was involved in similar Big Freeze banter with her male 3AW colleagues, including commentator Tony Shaw, who suggested they sell tickets to determine who would get to “push” Wilson into the water.

Newman said Wilson’s response to that suggestion was simply to say “oh boys”.

“Why would you cajole with the group on your station then feign indignation about the other station five days after it happened?” he said.

Newman also pointed to an “ill-conceived gag gone wrong” which Wilson apologised for after a “tongue-in-cheek” attack on a fellow female journalist.

“You can understand if you’re going to want to be equal and treated equally … don’t complain when it’s too equal,” he said.

“Now, finally, the jig’s up Caro. Honestly and truly, you are becoming an embarrassment.

“Even if you were under water you’d still be talking.”

Newman’s vitriolic diatribe came at the end of a day that saw McGuire and Wilson share a lengthy telephone conversation to clear the air.

“Eddie and I had a really long conversation, he attempted to explain how the whole situation unfolded and I made it clear why the comments were so hurtful,” Wilson told The New Daily earlier on Wednesday night.

“He was genuinely remorseful and incredibly sorry, and we’ve made our peace,” she said. “We go back a long way and deep down we like each other.”

The very public controversy has taken its toll on McGuire, who has been granted leave to sit out Thursday night’s Fox Sports football coverage.

“The events of the week have emotionally and physically flattened me,” he told Fairfax Media.

“I don’t think I’d be able to perform to the level that people would want to see on Thursday night footy.”

McGuire’s sexist comments revolved around him, North Melbourne chairman Brayshaw and St Kilda assistant coach Danny Frawley “joking” about how much they’d pay to see Wilson take to the Big Freeze slide and not re-emerge from the water.

“I reckon we should start the campaign for a one-person slide next year. Caroline Wilson. And I’ll put in 10 grand straight away – make it $20,000. And if she stays under, $50,000,” McGuire said. (Click on the owl to read the full transcript and listen to the incident  ).

Opposition Leader Bill Shorten cancelled an interview scheduled with the radio host for Tuesday morning, branding the comments “unacceptable”, while players from the Richmond AFL club announced they will boycott speaking with Triple M over the weekend.

Richmond player Jack Riewoldt told AFL360 there had been discussion at the club regarding how the players felt about McGuire’s comments.

“The club is pretty strong in its stance and our club is a real leader for supporting women’s rights,” he said. “The football club is not going to partake in anything with Triple M this week … and it may continue on.”