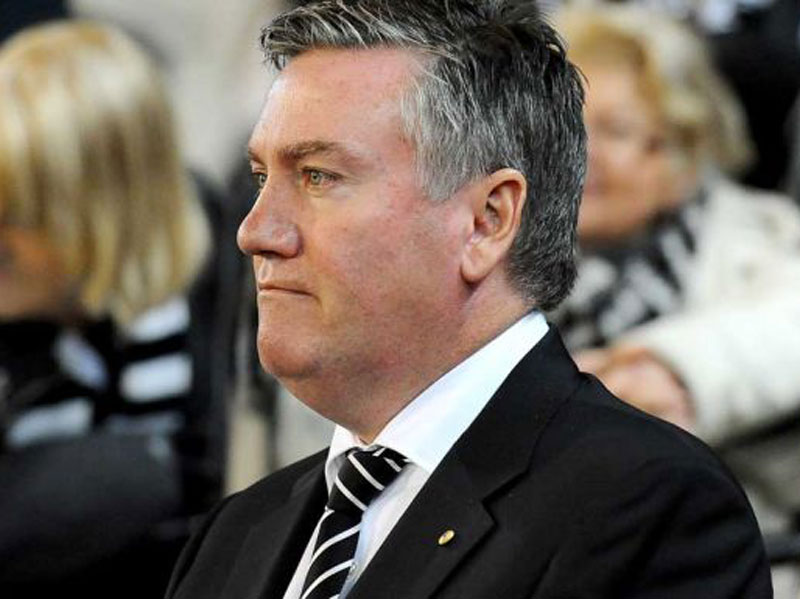 Collingwood Football Club says it has accepted Eddie McGuire’s apology for his on-air comments on Caroline Wilson, but players from rival team Richmond has vowed to boycott Triple M radio over the controversy.

McGuire apologised on Monday for joking about drowning Fairfax AFL journalist Wilson while talking about The Big Freeze, a charity event where football personalities were to be dunked in freezing water.

Collingwood said in a statement its board “accepted Eddie McGuire’s unreserved apology”, adding it “expressed its complete and ongoing support for his position as president”.

“The board and the club take the matters raised by these comments seriously,” it said.

“The Collingwood Football Club respects its values and its position in the football and broader communities.”

The Magpies board had issued a statement on Monday night, saying there was no place for the support of violent behaviour or language – even in humour.

“Our club’s a real leader for supporting women’s rights,” he told Fox Footy.

“The football club’s not going to partake in anything with Triple M this week and it hasn’t been set, a final date yet, so it may continue on.”

He said the move was led by senior players.

“Sitting in the car speaking to my partner Carly about it, the way I look at it and the way we’ve spoken about it is, if it was her in that situation and I was the partner … how would you feel about that?” he said.

“You’ve just got to put yourself in [Wilson’s] shoes and it was a no brainer for us in the end.

“I’m so proud of my football club to be able to do this and be a face of change and stand up and say, ‘You know what we don’t think this is the way to go about it, we don’t think it’s right’.”

“I’ll put in 10 grand straight away, make it 20. And if she stays under, 50. What do you reckon guys?” McGuire said to co-hosts James Brayshaw and Danny Frawley.

Brayshaw – the chairman of the North Melbourne AFL club – suggested the bet would see “money piling in everywhere”, while former St Kilda captain and Richmond coach Frawley said he would “actually jump in and make sure she doesn’t [come up]”.

McGuire, Brayshaw and Frawley have now all issued apologies.

McGuire, Collingwood’s president since 1998, initially played down the incident as “banter” before offering an unreserved apology in the evening.

Wilson, a veteran AFL journalist, told the Nine Network on Monday night that she accepted the trio’s apologies, but McGuire “had a few cracks at it and he’s finally got there tonight”.

McGuire’s remarks put immediate pressure on the club as major sponsor Holden revealed on Monday night that it had sought a meeting with the Magpies to discuss the issue.

Holden’s sponsorship deal with the Magpies, understood to be worth $3 million per year, includes naming rights for Collingwood’s administration and training headquarters near the MCG.

A spokesman for another Collingwood sponsor, CGU, said the insurance company had spoken directly with the club “to express our disappointment at the comments made” but that there would be no changes to the sponsorship arrangement.