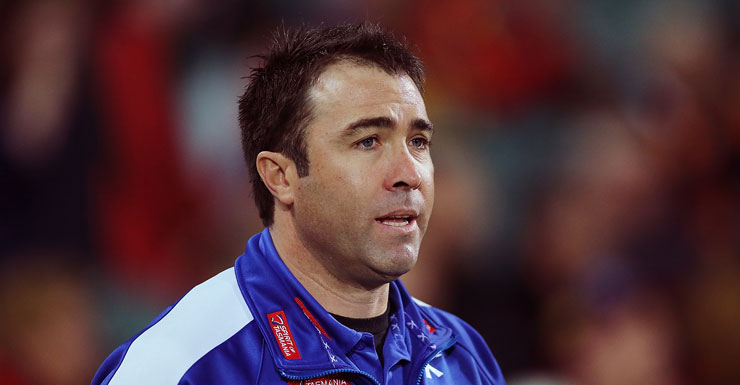 The AFL has acted.

Incensed by inflammatory comments, the league handed out whopping fines in a bid to set an example and avoid an ugly repeat.

The only problem is, it punished the wrong people.

Yes, North Melbourne coach Brad Scott’s post-match criticism of umpires on Friday was unprofessional, and a fine, although arguably not one that totalled $80,000, was probably required.

But Scott’s words pale into insignificance when compared to the offensive comments aired on Triple M last week.

McGuire also compared Wilson to a “black widow” on the station. Click the owl for the full transcript and audio of the discussion.

The fallout has dominated discussion across the country since the comments belatedly came to light on Sunday, and rightly so.

Men are not immune, either, with one in 20 becoming the victim of an attack after the same age.

They are chilling numbers.

They are why the Triple M comments simply cannot be brushed off as a ‘joke’ gone wrong.

To make matters worse, the comments came in a ‘White Ribbon Round’ to raise awareness surrounding domestic violence.

They came in the same week the AFL signed the ‘Our Watch’ statement, committing itself to do more to quash attitudes which can lead to violence against women.

They came in the same week the AFL launched its own women’s league.

The AFL had a perfect opportunity to send a significant statement to the community on an incredibly important issue.

But instead of coming down hard on McGuire, Brayshaw and Frawley with fines and punishments, they were just condemned.

The AFL left it until Tuesday afternoon to come down hard when it severely punished Brad Scott.

Questioning the integrity of the league’s umpires is a big issue in the AFL world, but not one that started a national furore that saw dozens of people, including Prime Minister Malcolm Turnbull, condemn the comments.

“I know he is [unfairly treated], because the umpires told our players that, [saying], ‘Well, he’s a ducker, so we don’t pay high free kicks to Lindsay [Thomas]’,” Scott said following North Melbourne’s nine-point loss to Hawthorn.

“They told our guys that, so that’s clearly a pre-conceived idea.”

Scott, whose claims were later proven as factually incorrect, was responding to a question about a free-kick Lindsay Thomas did not receive.

The AFL later admitted that the wrong decision was made.

Scott was fined $30,000 personally and North Melbourne, the only Victorian club in the competition that has severed its relationship with gaming machines, was slapped with a $50,000 sanction.

The coach also fronted the media on Monday, profusely apologising and admitting he made a “really terrible mistake” by not fact-checking the alleged umpire comments before entering a press conference.

It is also hard to believe that, given that sanction, McGuire, Brayshaw and Frawley have avoided punishment from the AFL.

The double standards send a confusing message to the community.

The only positive from the last week is that domestic violence is being discussed, and seriously.

But the whole sorry saga has been shockingly handled from start to finish, including McGuire’s four attempts at an apology on Monday.

The Collingwood supremo used to open The Footy Show with the catch cry ‘what a big week it has been in football’.

What a poor week it has been in football.

Eddie gets away scot-free on day of massive fines