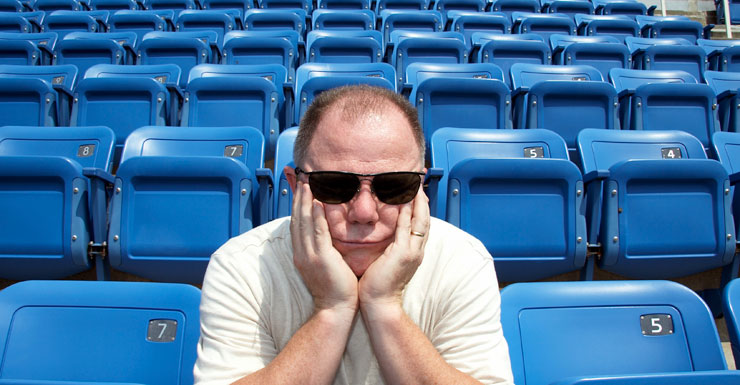 Round 13, once again, illustrated one of footy’s biggest issues. These bye rounds are garbage.

Accustomed with nine games of football most weeks during the home-and-away season, over this three-week period we, as fans, have to settle for six matches each weekend.

That ensures all 18 sides get a mid-season bye – giving players a chance to rest their banged-up bodies after a brutal start to the year.

• Holden to review Collingwood sponsorship
• Eddie, James: it’s time to go
• McGuire and Co are ‘sorely out of step’

And, theoretically, with fewer games, it should mean that each club gets greater exposure due to the clearer airspace.

But unfortunately the result is often one that is less than desired, with poor standard games like the Brisbane vs West Coast contest that was dished up on Saturday afternoon.

Normally, fans would have an alternative with another match being played simultaneously, but last weekend, we were forced to endure a substandard product that only hurts the AFL brand.

Over the course of the three bye rounds, there appear to only be three or four games of actual interest to the neutral.

One of those matches was the Saturday-night contest between Geelong and the Western Bulldogs, which, unfortunately, was an absolute fizzer.

The solution to this issue is very clear, though.

Instead of multiple bye rounds and diluted quality, let’s just have one week off from the AFL.

No State of Origin. No nothing.

If we’re desperate for a footy fix, they could hold the EJ Whitten Legends Game during the bye week on a Saturday night at the MCG.

Or fans could get out and stand on the fence and watch some grassroots footy.

The AFL has already conceded the week after the season finishes will be a week off, in order to stop the farcical but perfectly legitimate player management in the final round of the season.

Why not just have an AFL-free week as we get to the halfway mark of the season?

Whilst some will point out that the TV networks will have their arms up in the air, the facts are that over the three-week period, there will still be 18 games, whether it is broken up in a 6-6-6 formula or Bye-9-9.

The TV fans at home also lose during the bye weeks. This week, there were only two games shown on free-to-air, compared to the normal four.

The AFL stuffed up with the sub rule and they quickly removed it.

It is now time for them to recognise their mistake with the multi-bye rounds and realise that spreading the rest out over three weeks is not helping their product, but hindering it.

Give everyone the week off from AFL and we can come back refreshed for the run into the finals.

Us fans need the bye as well.

How fans have been short-changed by the AFL