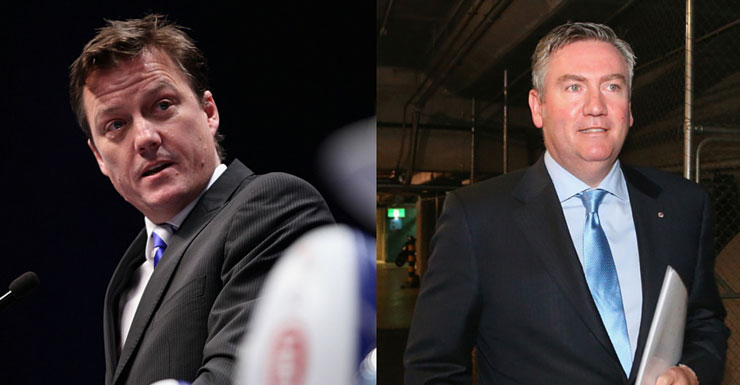 Eddie McGuire and James Brayshaw must stand down from their football clubs. Collingwood president McGuire and North Melbourne counterpart Brayshaw – and part-time St Kilda coach Danny Frawley – all played their part in an incredibly ugly saga. Their ‘jokes’ about drowning Fairfax journalist Caroline Wilson for $50,000 were not funny.

They were infantile and offensive. And, as a result, the pair are not to preside over major sporting clubs in this city – or any other.

Brayshaw will step down at the end of the season but North Melbourne must bring his departure date forward, and as for Eddie, this should be his last gaffe while in charge of the Magpies. This type of comment has nipped the careers of more substantial figures than McGuire and Brayshaw. One example is, in 1996, when then-Liberal leader Alexander Downer launched the party’s domestic violence policy with the line “the things that batter”. The party quickly dumped Downer for John Howard. If Collingwood and North Melbourne do not act in a similar way, and all indications are that they will not, the AFL should step in and do a ‘Downer’ on McGuire and Brayshaw. Last year, Rosie Batty was appointed Australian of the Year for her stance on domestic violence. In receiving the honour, she followed Adam Goodes, who did so much to provoke Australians into thinking about racism and the past treatment of Indigenous Australians. McGuire insulted Goodes in 2013 with his racist ‘King Kong’ remark.

He has now demeaned what Batty stands for with his remarks about Wilson. In a week in which the AFL launched the women’s league, coming in 2017, McGuire and Brayshaw have done much to damage the code’s credibility. In May, Netball Australia announced that the Collingwood Football Club were one of their preferred bidders for a franchise in a new-look competition. Last week, the Magpies were one of eight clubs granted a place in the new women’s football league. Questions must now be raised if McGuire is fit to preside over these teams. McGuire has played down the offensive nature of his comments. On his Triple M breakfast program, he said: “[I’m] really disappointed that these comments have led to these feelings from people. “I apologise and retract them in the spirit of what we’re trying to achieve, which is to look after women and children in our community.”

McGuire added that his comments on Wilson were in keeping with the good-humoured and sledge-fest tone of the day. It is not the first time that Wilson has been subjected to sexist jibes by the football media’s ‘blokes club’. In 2008, McGuire’s one-time side-kick Sam Newman undressed and groped a Caroline Wilson mannequin on the AFL Footy Show. The Australian Communications and Media Authority ruled that the skit “was likely, in all the circumstances, to have provoked severe ridicule against the journalist on the grounds of gender”. Little seems to have changed. This latest incident occurred in the same week that the AFL held a ‘White Ribbon Round’ to raise awareness surrounding domestic violence. A match was dedicated to the cause, that being Saturday’s clash between the Western Bulldogs and Geelong. Each year in Australia, 52 women are killed as a result of domestic violence. The Bulldogs wore a jumper that had the number next to a white ribbon and club coach Luke Beveridge said: “We’ve made a choice as a club to not bury our head in the sand [and] to stand up and speak out for women who’ve been in those situations.” Beveridge showed true leadership on an issue which McGuire and Brayshaw don’t seem to understand. And that is why they must go. Dr Tom Heenan teaches sports studies at Monash University. To read more of his columns, click here.

Eddie and James: sorry, but this is why it’s time to go