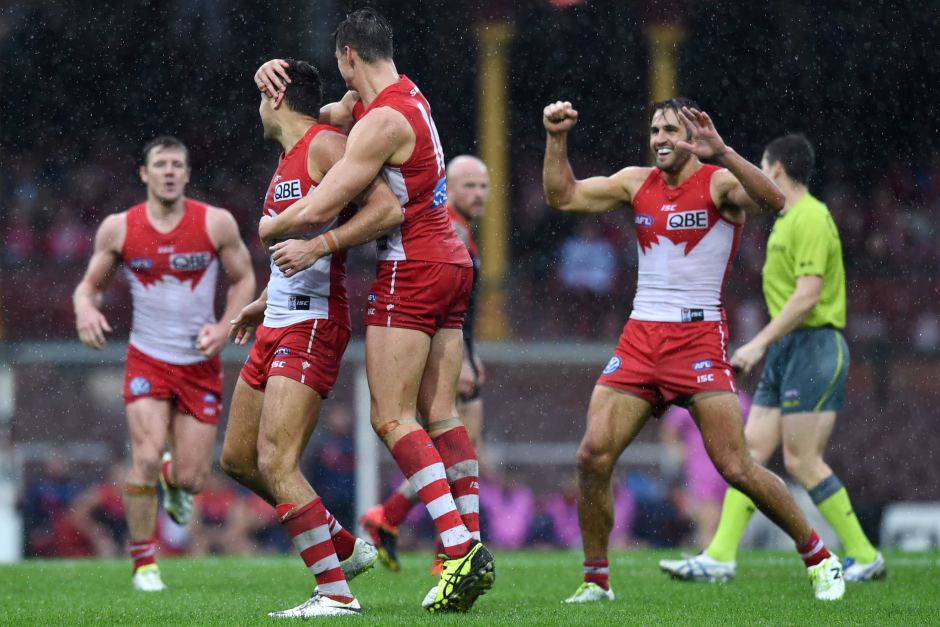 Lance Franklin has booted four goals to help Sydney move into second place on the AFL ladder with a 55-point win over Melbourne.

The Swans laid a record 155 tackles to set up victory on Saturday at a rain-sodden SCG, smashing the previous high set in 2010 when Richmond applied 142 tackles against Port Adelaide.

Franklin also hit new heights as the 13th player in VFL/AFL history to kick 750 goals, taking his tally to 753 majors from 234 career games.

An efficient home side restricted their visitors to just one goal per quarter, booting two majors to every one of the Demons’ for the first three terms before seizing momentum with six goals in the fourth to breeze to a 12.14 (86) to 4.7 (31) victory in front of 19,086 spectators.

It’s the 10th win from 13 matches for John Longmire’s side and draws a line under last weekend’s heavy loss to Greater Western Sydney.

The ninth-placed Demons, meanwhile, could not apply enough pressure in coach Paul Roos’ first return to the SCG in more than four years.

Sydney had the better of a tight first half, winning 10 more clearances to lead by 18 points at the main break as players slipped around on the wet turf.

Christian Petracca put the visitors up with the first goal, but their hosts banged in the next three, including one from Kurt Tippett’s ruck replacement Toby Nankervis in just his seventh AFL match.

The player Nankervis and ruck partner Callum Sinclair were tasked with stopping, Melbourne big man Max Gawn, did not quite reach the heights of his display in last week’s win over Collingwood but still exerted his influence with 58 hitouts.

For the Swans, Dean Towers contributed two majors while Kieren Jack was much improved on last weekend’s below-par showing against the Giants, racking up a game-high three goal assists along with three behinds.

The Swans finished four up in contested possessions, and with 21 more disposals and four more inside 50s.

Sunday’s other match saw GWS shake off a determined Essendon challenge by 27 points.