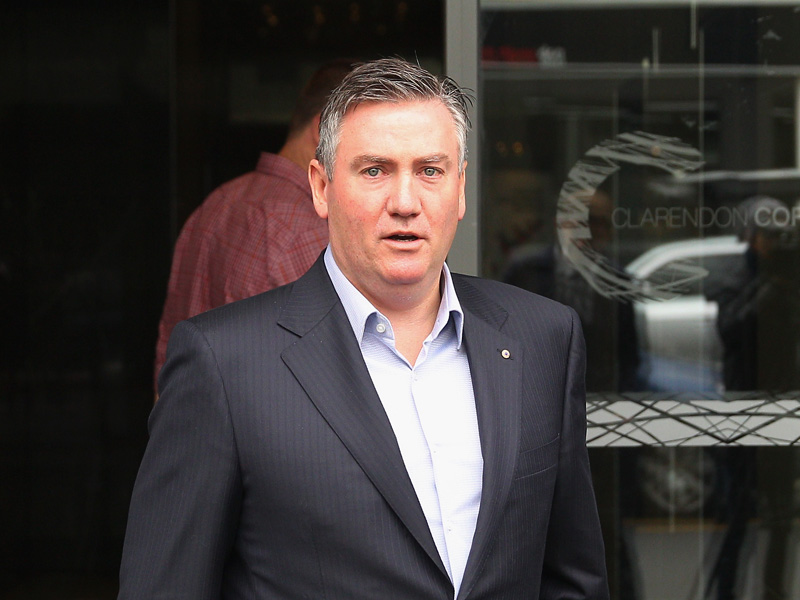 The AFL contacted McGuire over a radio conversation in which he offered money if Wilson went down the slide at the Big Freeze at the MCG, joking about offering more if she stayed under the water.

The Big Freeze started in 2015 as a fundraiser for motor neurone disease and features a number of AFL personalities sliding into a pool filled with ice water.

McGuire started talking about AFL chief executive Gillon McLachlan taking the plunge next year before pivoting to talk about Wilson.

On Monday, McGuire said on Triple M the remarks were only banter and he had no intention to offend.

“[I’m] really disappointed that these comments have led to these feelings from people,” he said.

“I apologise and retract them in the spirit of what we’re trying to achieve, which is to look after women and children in our community.”

His apology and retraction came after he initially said the comments were made “in the spirit of the fun on the day and who would be next going down the slide”.

Responding for the first time to comments by the Collingwood president in which he said he’d like to see her drowned, Wilson told 3AW Breakfast on Monday morning: “I wasn’t happy about them (the comments). I found out about them last Monday night, they were relayed to me by a friend at Channel 9.”

McGuire sparked a furore by jokingly offering to pay $50,000 to watch the respected journalist be forcibly held under water.

In remarks made on Triple M that have been labelled “disgusting” and “misogynistic”, McGuire and a team of male radio broadcasters said they would like to see Wilson, a senior Fairfax football writer, forcibly submerged until “she doesn’t get up”.

McGuire made the remarks last Monday before he participated in the Big Freeze at the MCG, where celebrities and AFL personalities slid down a slide into a pool of iced water to raise money for medical research.

“I think he’s probably crossed the line and I didn’t like the language,” Wilson said. “I don’t accept that it was playful banter, I’ve gotta’ say.

“It’s like casual racism, casual violent language might be meant as a joke, but I wonder how many times we have to draw this line in the sand between this sort of language and what is a joke and obviously what is completely unacceptable.”

Meanwhile, McGuire said the comments were made in the spirit of the Big Freeze at the G and there was no intention of “promulgating or supporting” domestic violence.

“Anything, anything at all that can be seen to promulgate domestic violence is unacceptable. Full stop,” he said on Monday morning.

“That’s the big issue here. You can argue as much as you like about the tone …but anything that is seen to promulgate or support — even in a light-hearted manner — any form of domestic violence is unacceptable.

“That was the least of anyone’s intention. In fact, it didn’t even cross anyone’s mind. The day – the Big Freeze at the G – was based on good humour, sledging each other, tomfoolery. The whole thing was about having fun at Gil’s expense, my expense, everyone’s expense. Neale Daniher did the gag with me saying that we’re going to get extra people to push you down and everyone’s hoping you’re not going to get up out of the water. That’s where it was all at – the fun and stupidity.

“However, it was clearly banter, but on White Ribbon weekend, we have to be ever-vigilant in stamping out anything that could be misconstrued one iota of supporting the abhorrent act of domestic violence.

“The only thing I’ll say there is that it was all done in the spirit of the fun of the day and who would be next going down the slide. Totally unacceptable.”

Wilson is a multi-award winning journalist who features on 3AW’s AFL coverage and on the Nine Network’s Footy Classified.

The AFL said in a statement late on Sunday night that the comments were “clearly not appropriate” and could “support violent attitudes against women”.

The League confirmed it had contacted the men, plus All Australian selector Danny Frawley, who was also involved.

During the segment, Frawley said: “I’ll actually jump in and make sure she doesn’t [get up] — I’ll hold her under, Ed.”

The comments came in the same week the AFL publicly supported a campaign against domestic violence and launched its own women’s league.

On Monday afternoon Brayshaw apologised on his Triple M radio program: “Things were said that were both inappropriate and unacceptable. For that I offer my sincere and unreserved and unqualified apology.”

McGuire was joined in his remarks by Nine Network personality and North Melbourne president James Brayshaw.

He asked North Melbourne chairman James Brayshaw what he thought about the idea.

“No, yep, straight in,” Brayshaw replied. “If you ran that auction from down there, I reckon you’d start grabbing some bids out of the seats too. There’d be money piling in everywhere.”

Although the comments were made a week ago, criticism gathered momentum over the weekend, with people on social media expressing anger at McGuire and those on air with him.

The controversial exchange can be heard in the video below from 4:30 onwards. It also involved AFL legend Wayne Carey. Click the owl for a full transcript

Was this a ‘slip of the tongue’ by Eddie McGuire? Time for @CollingwoodFC to stand up and boot him out of the club https://t.co/RkNDGc3S0O

On Monday during the #whiteribbon round, Eddie McGuire & cronies joked about drowning a prominent female journalist. https://t.co/0gghg2bnN9

It’s v hard being a footy fan when they continue to perpetrate a dangerous discourse against women.

Cass why don’t you listen to @TripleMMelb? Me: I don’t need more white men laughing at women being abused & harassed & killed as a “joke”

“I made a couple of insensitive and inappropriate remarks about Caroline Wilson,” Frawley said on Sunday night. “Clearly it was a poor attempt at humour which I sincerely apologise for.”

The AFL’s statement said: “The AFL expressed the strong view … that although seeking to be light hearted, the language and tenor of the wording could be seen to be supporting violent attitudes or actions against women and was therefore clearly not appropriate.”

The controversy preceded a White Ribbon game played between the Western Bulldogs and Geelong on Saturday night.

The White Ribbon movement is dedicated to stopping domestic violence in Australia.

McGuire’s joke also came two days before the AFL announced which eight clubs would be granted a license to compete in the inaugural women’s league.

One of the teams granted a license for the inaugural season in 2017 was Collingwood. McGuire lauded that announcement on Wednesday.

“To build [new] facilities and have state-of-the-art facilities for a women’s football team and other forms of women’s recreation – it’s just a perfect situation for us.”

Collingwood also had plans for a netball side to play in Australia’s national competition, it revealed earlier in 2016.

In 2013, McGuire was forced to publicly apologise after saying indigenous AFL star Adam Goodes should be used to promote a stage production of King Kong.