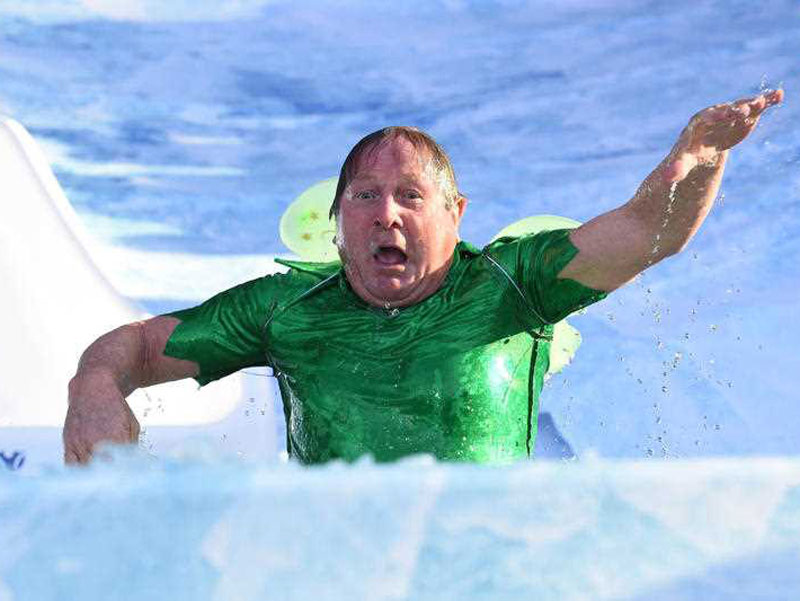 Sheedy’s granddaughter Charlotte ordered him to dress up as the Peter Pan character for Monday’s second Freeze At The ‘G fundraiser.

The Richmond and Essendon legend was among 10 AFL and television personalities who put on fancy dress and slid into a pool of icy water.

More than $1 million is understood to have been raised on Monday for MND research ahead of the Melbourne v Collingwood Queens Birthday match, which was won by the Demons by 46 points.

Former Essendon captain and Melbourne coach Neale Daniher is suffering from the fatal disease and has become the very public face of the fight against MND.

Also on Monday, Daniher was made a Member of the Order of Australia in the Queens Birthday honours for his AFL and charity contributions.

“It’s terrible when your grandkids get you back,” Sheedy said of his fancy dress.

“He [Daniher] is a superstar, always has been. He’s a beautiful person, the whole family.

“It does give people hope and that’s what Neale is on about.”

The day’s fundraising also featured thousands of fans, most wearing the distinctive blue MND beanies, marching to the MCG ahead of the match.

Collingwood president Eddie McGuire’s trademark suit was festooned with sponsor logos, plus Daniher’s No.6 on the back.

It is understood McGuire raised $10,000 for each logo.

Gawn, who kicked three goals and had 31 hitouts, won the Neale Daniher Trophy as best afield.

After 11 games without a win against the Magpies, Melbourne have won their last three clashes. Melbourne also beat Collingwood in round four by 35 points.

While the Demons improved to a 6-6 record and lurk just outside the top eight, Collingwood are off the pace at 4-8 in a season where they started with legitimate finals aspirations.

Melbourne started strongly and had the Magpies under pressure for most of the game, but the door was slightly ajar at three-quarter time.

The Demons had 86 more possessions and should have been further in front than 31 points.

When Brodie Grundy kicked a goal in the first minute of the last quarter, Collingwood were almost back in the game.

But Melbourne’s response was immediate and conclusive – a five-goal burst that killed off the game.

Jack Watts kicked two of them, seven years after the Collingwood defence monstered him when the No.1 draft pick made his debut on Queens Birthday as a teenager.

Sheedy stars as Tinkerbell to raise money for charity