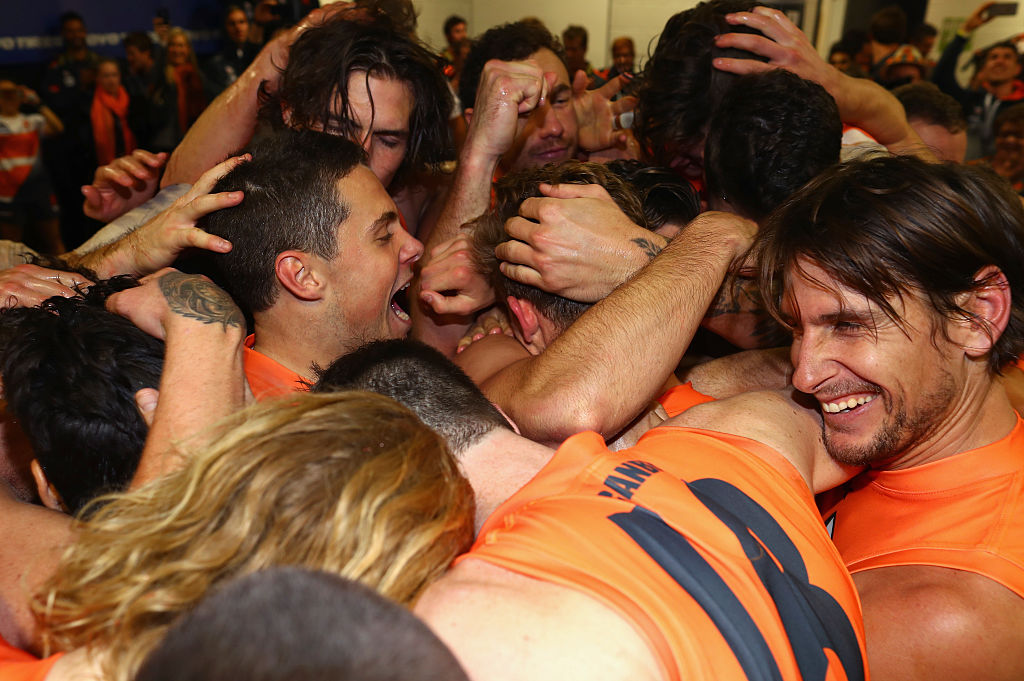 GWS will take on the Bulldogs at their home ground.

Greater Western Sydney have shown they are ready to hang with the AFL big dogs after celebrating their 100th game with a 42-point-win over local rivals Sydney.

The result on Sunday at Spotless Stadium snapped the Giants’ two-match losing skid and a three-match Swans’ winning streak.

A win would have put Sydney top, but they were second best for most of the game, which was viewed by a crowd of 21,541, a record for a sporting fixture at the ground since its redevelopment.

The Giants won the midfield battle and got more drive out of defence through Brett Kirk medallist Heath Shaw, Zac Williams and Nathan Wilson.

From being 23-23 early in the second quarter, the Giants kicked seven of the next eight goals to lead by 40.

The Swans were hit by injuries to two in-form players, with Kurt Tippett leaving the field in the second quarter and speedster Gary Rohan sitting out the final quarter.

A loss to the Suns would have been a dagger through the heart for the Tigers, who started the weekend three games and plenty of percentage outside the top eight.

Richmond kicked six of the last seven goals in a frenetic last quarter and twice came from behind to win.

Typical of how their season has gone so far, the Tigers eventually won it the hard way.

A three-goal run to Richmond gave them the lead in the last term, but a goal to Tom Nicholls at 21 minutes put the Suns back in front.

Then Martin capped his day, first by setting up Sam Lloyd for a goal and kicking one himself to put the game beyond Gold Coast.

And St Kilda coach Alan Richardson praised the resilience of his players after the Saints rebounded from a confidence-sapping loss to stun Carlton by 32 points at Etihad Stadium.

The Blues went into Sunday’s clash having won six of their past seven games, but St Kilda bounced back from an 88-point hiding at the hands of Adelaide to hand Brendon Bolton’s men a harsh reality check – 17.8 (110) to 12.6 (78).

The hard-working Saints led at every break and held a game-high 47-point advantage early in the last quarter before easing to their fifth win of the season in front of a bumper crowd of 47,945 fans.

Both teams have their bye next week, the Blues going into their break with a 6-6 record and the Saints improving to 5-7.