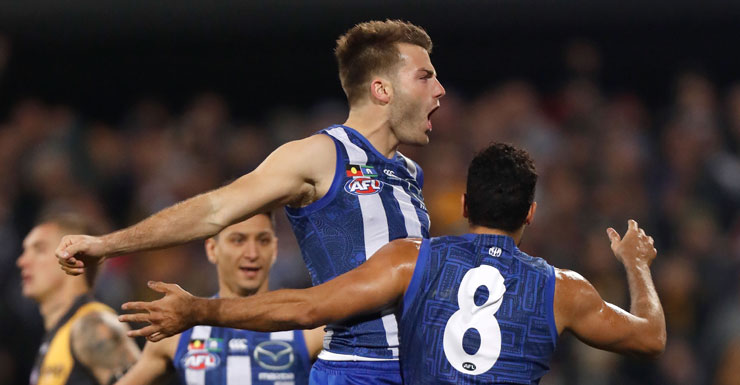 North Melbourne’s start to the season has been outstanding.

The only thing that matters in AFL football is wins next to your name and North have 10 from 11.

They’ve got the fourth-best attack, the fifth-best defence and are in the top three from scoring when they’re inside 50. It’s a pretty balanced approach.

But they’ve also had a pretty good run with the fixture.

North Melbourne’s run home is incredibly difficult. How about their next four matches? They’ve got Geelong and Hawthorn at Docklands and away trips to Adelaide and West Coast.

Some respite eventually arrives in the form of Collingwood and St Kilda but they then finish the season with successive matches against the Western Bulldogs, Hawthorn, Sydney and GWS. That’s very tough.

I reckon there’s only two certain wins in there, against the Saints and Magpies.

North’s older players have been sensational this season.

But the likes of Brent Harvey, Nick Dal Santo, Jarrad Waite and Daniel Wells … at that age, you don’t get better. You’ve just got to hold on to your form.

Injuries are starting to stack up, too, with Sam Wright joining Shaun Higgins and Ben Jacobs on the sidelines for at least the next six weeks.

Don’t get ahead of yourself

Starting to think about finals and potential grand finals is fraught with danger.

It’s about working through a season in small blocks, potentially three weeks, and not getting carried away.

The temptation will be there for North but Brad Scott needs to keep his players focused on the job.

I don’t subscribe to the theory that because North have lost two preliminary finals in the last two years, that that will help them in any way.

We like to think about the romanticism about these sorts of things but go and ask Ross Lyon about his time at St Kilda.

It didn’t work out there and they got terribly, terribly close.

I think of 1993 with the Bombers, who took their chance and won a flag before they were expected.

The Kangaroos just need to finish in the top four. That’s crucial.

Todd Goldstein is just outstanding in the ruck. I watch him closely and rate him very highly.

He’s in the top bracket that I’ve seen. The number of goals he created against Carlton at Etihad Stadium – he set up seven or eight with his taps.

And it’s been pleasing to see Daniel Wells in such good form. He’s critical.

If there’s one thing that North don’t have a lot of, it’s outside run. Ben Cunnington, Jack Ziebell and Andrew Swallow do the grunt work on the inside but Wells needs a bit of help.

That’s where I think Jed Anderson could be very handy.

The ex-Hawk seriously injured his hamstring this year but is close to returning and he is pretty quick.

He might need to play for five or six weeks in the VFL to get back into some form but if he can come in and play a role, it will enhance North Melbourne’s chances.

North are certainly capable on any given day if everything goes well.

But that also applies to Hawthorn, Sydney, the Bulldogs, Geelong, and even GWS and West Coast.

The great thing about footy this year is it is so open.

Sydney’s attack on the football is very admirable. They’re ferocious.

Sometimes I worry they handball too much but I’m very impressed.

And September is about contested footy and I love the Bulldogs. No side in the comp is harder than them.

I think Sydney and the Western Bulldogs, at the moment, are North’s biggest challengers.

For the Kangaroos, their next month is huge. Two wins would be a good result. If they can sneak three, their fans will be elated.

But it’s a long season. And they’ve got plenty of tests to come.