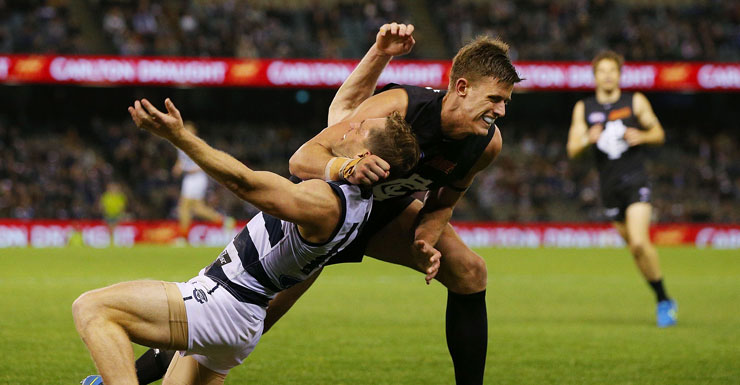 Head-high tackles – and those players who proactively try and win free-kicks from them – are all the rage in football.

Scott revealed that North players train to receive head-high tackle free kicks – and also train their players to tackle in a way that won’t be penalised.

His ‘if you can’t beat them, join them’ attitude should be the catalyst for long term and meaningful change among the game’s rule-makers.

Some footy fans are willing to pot soccer at every opportunity for the staging and dives that occasionally occur in that code.

But are we headed the same way in the AFL?

Winning head-high frees by dropping the knees is now a tactic. It’s not just a quirk of play.

Dermott Brereton lashed out against the growing trend, labelling the practice as “not in the spirit of the game”.

The players engaging in this behaviour have acquired a new skill – one that’s symptomatic of the modern game.

It’s not a skill to be proud of, though. Skills used to be about kicking and handballing.

The calls to end the lunacy aren’t limited to ex-players and media commentators. Even the players are getting sick of it.

Brisbane Lions captain Tom Rockliff has called on a youngster at his own club, Rhys Mathieson, to work on his technique in tackles.

At almost the same time of last year – Round 10 it was – the AFL announced a crackdown on head-high free kicks.

Football Operations Manager Mark Evans then said: “The onus is on the tackler to tackle the player with the ball legally.”

“What we have begun to see in the game is the player with the ball driving his head toward a tackler or leaning into a tackler in order to receive a free kick.”

The AFL then amended the rules. They read:

– Any movement where a player drives or leads with their head into a stationary or near-stationary tackler will be deemed as a drive and will be umpired as the player with the ball having had ‘prior opportunity’.
– The player must immediately kick or handball or a free kick for holding the ball, under the prior opportunity rule, will be paid against him.

So, why has this not been adhered to with any effect this year?

Clubs and players are only exploiting flimsy rule-making for their own gain. If the free kicks stop, so too does the ducking.

It’s the AFL that needs to be vigilant and unwavering in enforcing this existing rule change.

The ‘duck’ stops with them.

How the AFL can easily stop the ducking problem