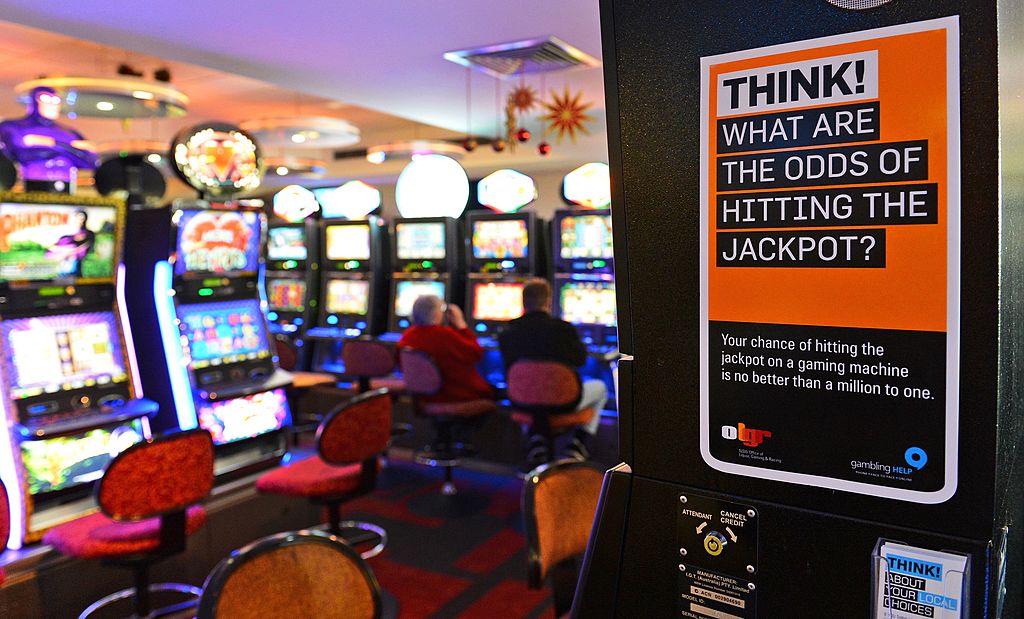 NSW will be the first to turn on the poker machines

Leading AFL clubs have come under attack from Victorian councils for allegedly exploiting loopholes in state gambling laws to claw back millions of pokies dollars earmarked for community support programs and charities.

Carlton Football Club is at the centre of the storm after the Hobsons Bay City Council in Melbourne’s western suburbs stepped up its campaign to force AFL clubs to hand over a share of their pokies takings to local communities.

All Victorian sports clubs with pokies licences must show that at least 8.33 per cent of the net gaming machine revenue is used to deliver “community benefits”.

• Who are the big losers in the AFL’s money war?
• ‘My wife and I lost a million on the pokies’
• Australia Post banks millions from offshore casinos
• Dirty tricks used by online sports betting companies

The problem is that the current law contains a broad definition of what those “benefits” can be, allowing AFL clubs such as Carlton, Hawthorn and Collingwood to have money they spend on stadiums, catering and football staff count towards meeting their community service obligations.

The club did not fund gambling support programs in the local area, electing instead to meet the community benefits test mostly by upgrading amenities such as spas, air conditioners, toilets and stands at its home ground, Ikon Park, located outside the municipality.

Documents filed to the Victorian gambling regulator show that Carlton met the community benefits test by spending around $600,000 on capital upgrades to its ground and social club amenities and only $100,000 for “philanthropic and benevolent purposes”.

“I accept that the Carlton Football Club has a right to take its share of the gambling profits for use on whichever club activity or capital works program it sees fit to carry out,” Cr Hemphill told the minister in the letter.

“What I cannot accept is that it is ‘double dipping’ by taking the community’s share of the revenue for its own programs.

“Unless the government legislates to make it clear to all pokie venue operators that ‘community benefit’ funding is to be genuinely allocated to programs for the benefit of the community from which it is raised, the system will continue to be abused.”

Cr Hemphill has called on the Andrews government to amend gambling laws to make Carlton and other AFL clubs allocate funds directly to communities where they operate pokies venues.

“Despite repeated requests I have tried to talk with Carlton about ways to address the problem but I have not got a response from the club,” he said.

“It is very disappointing.”

Carlton Football Club did not respond to a request from The New Daily to comment on matters raised by Cr Hemphill.

Collingwood raked in more than $10.6 million in gaming machine revenue from two venues in 2015 and was able to meet the community service test by having more than $1 million spent on electricity, wages and rent at its pokies establishments recognised as “community benefits”.

A leading local government source told The New Daily that Collingwood was coming under pressure from Melton Shire councillors to stump up cash for gambling support programs in Melbourne’s outer western suburb of Caroline Springs where the club operates a lucrative pokies venue.

Hawthorn, which hauled in $11.1 million from its lucrative ‘Vegas’ gambling establishment in the outer Melbourne suburb of Mulgrave, also helped fulfil its obligation by having $751,000 of costs incurred at the venue as community benefits.

The alleged rorting has not only angered local councils — mental health and gambling support groups are also demanding that the state government close the loopholes.

In a submission to a government review of pokies laws, Victorian Health Promotion Foundation (VicHealth) argues for a tightening of the definition of “community benefit”.

“VicHealth is aware that clubs are currently able to claim employment costs and operating expenses as a community benefit contribution,” the foundation states in the submission.

“There is limited evidence about the appropriateness and effectiveness of these business expenditures in providing a direct benefit to the broader community.”

A report commissioned by the Victorian Department of Treasury in 2012 found that the cost of problem gambling in the state could be running as high as $2.7 billion a year.