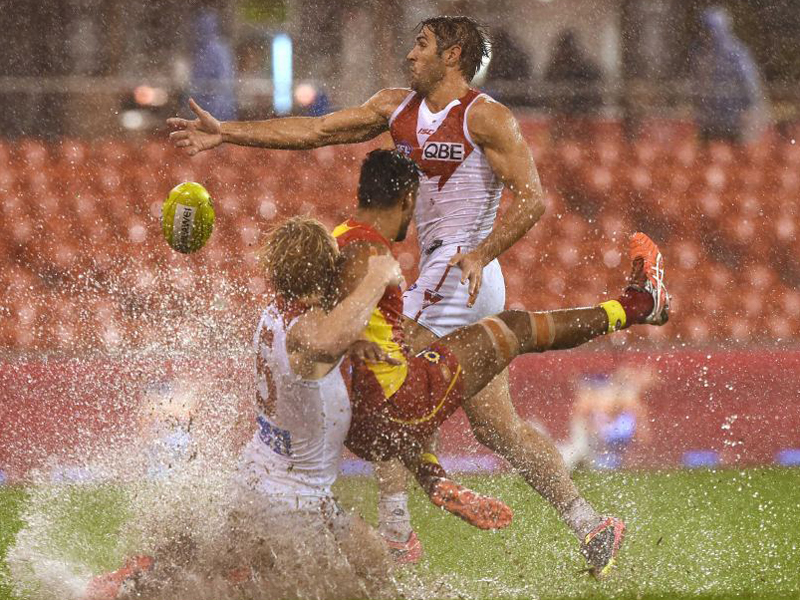 Sydney has consolidated second spot on the ladder with a 38-point win over the Suns in miserable conditions on the Gold Coast.

Heavy rain for most of the previous 24 hours had left Carrara resembling a swimming pool, with players aquaplaning over the sidelines going for the ball.

The match was turned into one endless battle for the ball – the teams combined for more than 250 tackles in the match, and nearly 400 contested possessions in the wet.

The Swans kicked the first goal of the match before the Suns booted the next three to take a surprise early lead.

They led by 11 at quarter-time, but the visitors steadied to go in front by 13 at the half.

Sydney then booted five goals to two in the second half to win comfortably.

The Swans (9-2) are now a game clear in second, while the Suns have lost eight straight to remain in 15th.

Geelong has snapped a two-game losing streak by holding off a brave challenge from Greater Western Sydney to claim a 10-point AFL victory at Kardinia Park.

Cats skipper Joel Selwood was the dominant figure in the fourth quarter, when he picked up 12 of his 29 disposals, kicked a crucial goal and set up another one for Tom Hawkins.

Former Cats star Steve Johnson could not have made a better start on his return to Geelong in Giants colours.

The mercurial forward had kicked 452 goals in his decorated 253-game spell with the Cats but few of them would have been better than his flying snap from tight on the boundary in the right forward pocket in the fifth minute of Saturday’s clash.

It was a crucial victory for Geelong, who had dropped their previous two games to Collingwood and Carlton. They have now improved their win-loss record to 8-3.

The Giants have slipped to 7-4 before next weekend’s Sydney derby against the Swans at Sydney Showgrounds.

The Cats’ next three matches are at Docklands against North Melbourne, the Western Bulldogs and St Kilda.

The Fremantle Dockers have finally won their first game of the season, thumping Essendon by 79 points at Subiaco Oval on Saturday night.

The win ended a drought that stretched back to the first week of the 2015 finals, when Fremantle edged the Sydney Swans by nine points at the same venue.

Since then, however, the bottom had dropped out of the Dockers’ form, as Ross Lyon’s men lost a prelim final to Hawthorn, and then stunned the pundits by racking up 10 straight defeats to start 2016.

With discussions about tanking swirling about after the club’s nightmare start, and talk of an imminent retirement for former captain Matthew Pavlich, the Dockers came out intent on answering the critics.

A 22-point lead at quarter time was more than doubled at the long break, as Fremantle booted three unanswered goals in time-on to lead 68-22 at the half.

The Bombers were struggling to make headway, and their task became impossible as the Dockers kicked seven goals to one in the third term to end the game as a contest.

Pavlich ended the game with three goals, along with Chris Mayne and Michael Walters, while Dockers coach Lyon would have been happy with his team’s spread of 13 different goalkickers.

Near the end of the game, the home crowd gave a huge reception to injured Bombers player Ryan Crowley as he came off the ground.

The long-time Dockers stalwart Crowley – who left the club after a 12-month ban for testing positive to a banned substance – was given a standing ovation by the fans as he limped off.

The Dockers (1-10) moved off the bottom of the ladder with the win, ahead of Essendon (18th) and Brisbane (17th) on percentage.