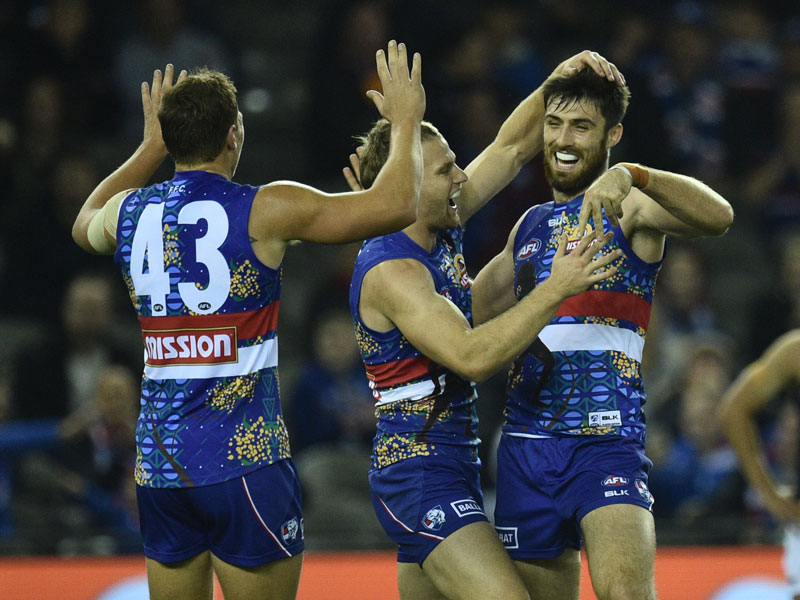 The Western Bulldogs survived a late charge by West Coast to score a thrilling eight-point win at Etihad Stadium on Sunday.

The much-anticipated clash between the top-four hopefuls lived up to expectations with the desperation shown by both sides giving the contest a finals-like atmosphere.

The Bulldogs lived up to their reputation as one of the best pressure teams in the competition, their midfielders’ hard work helping negate the influence of star Eagles ruckman Nic Naitanui as they went on to win the contested possession count 152-114.

The Eagles lost no admirers with their determined effort but ultimately fell to a defeat that leaves questions about their ability to win away from Subiaco unanswered.

Lachie Hunter, Jack Macrae and Marcus Bontempelli were important in the Bulldogs’ midfield, while Matthew Boyd and Matt Suckling impressed across half-back.

Brownlow medallist Matt Priddis was outstanding for the visitors with a team-high 27 touches, with Andrew Gaff and Shannon Hurn also influential.

In a tale of two goalless key forwards at the MCG, the honours went clearly to Port Adelaide and Charlie Dixon.

The Power gave Collingwood a two-goal head-start before clicking into gear and claiming a dominant 19.11 (125) to 7.16 (58) victory over the hapless Magpies.

Port’s mosquito fleet of Aaron Young and Jake Neade (four goals apiece), Chad Wingard (three) and Jarman Impey (one) combined for more than half of their winning score.

In his first season with the Power, Dixon has taken his time to find his feet but emerged with 14 disposals, three marks and four tackles on Sunday.

At the other end of the MCG all eyes were on Travis Cloke, who was back into the senior side for the first time since being dropped in April.

But opposed to first-gamer Logan Austin he still looked a mere shadow of the man who won All-Australian honours in 2011 and 2013.

Despite the cold and damp conditions, Collingwood would have been disappointed with the small crowd of 28,567.

In the final game of the round, Josh Jenkins continued his breakout season with a seven-goal haul as the Crows thumped St Kilda by 88 points.

St Kilda young guns Paddy McCartin and Hugh Goddard were stretchered off Adelaide Oval as the Crows banked a comprehensive 19.19 (133) to 6.9 (45) victory.

Goddard suffered an achilles injury and McCartin was concussed.

The Crows remain the highest-scoring team in the competition and have now kicked 100 or more points in seven of 10 games – and have twice scored 97.

Jenkins, with 34 goals for the season, feasted on frequent supply from a midfield led by Rory Sloane (32 disposals), Matt Crouch, who ended with 36 touches, and Jarryd Lyons (28 possessions).