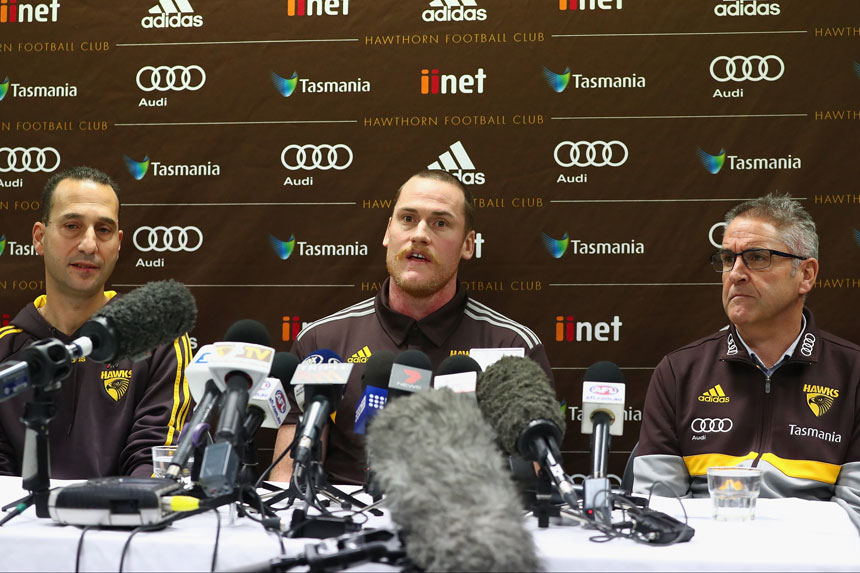 Jarryd Roughead’s press conference on Tuesday was very typical of the great mate I know and love.

At the club’s headquarters at Waverley Park, it was revealed he had “four small spots” of melanoma on his lung and would undergo immunotherapy for the next 12 months.

Speaking to the press, he was honest, positive and very matter-of-fact. He is ready to face this enormous challenge head-on.

As a good country boy, Jarryd was always the first person keen for a beer, a bet and a laugh when he arrived at Hawthorn in late 2004.

We quickly became mates and have remained so ever since.

We’ve had so many great times together, from holidays in Las Vegas and Byron Bay, to our weddings and his great bucks day at the races.

I played most of my career as a defender but when I occasionally drifted forward for Hawthorn, Roughy looked after me.

I’d be barking the wrong instructions and structures to my fellow forwards and he’d always be there laughing and telling me to shut up – and then correcting my wrongs.

Things in life can change so quickly. It’s a cliche but it’s a true one.

Just two weeks ago we were having one of our regular chats.

Roughy was delighted with how good his injured knee was coming along and said how he was hoping to be back playing against Melbourne this weekend.

Just a few days later, he got the terrible news that changed everything.

When I first found out, like a lot of people, I was in absolute shock. I was upset. I thought: ‘Surely not again.’

There’s no doubt he’s had down moments but he’s remained very positive whenever I have spoken to him.

Typical of the man he is, he was even a little embarrassed with all the attention.

It really shook up Hawthorn’s playing group when he told them that his cancer had returned. There were tears and a lot of emotion.

I have no doubt that emotional fatigue played a role in their poor performance against Sydney that week.

But, like always, Roughy was immediately looking for a way that he could help.

Throughout his upcoming battle, he’ll remain a regular fixture at the club. He wants to help his teammates try to achieve history in their bid to win four straight premierships.

And I think his mentoring role for Hawthorn’s young forward duo of James Sicily and Tim O’Brien will be particularly important. He just knows so much about the game.

Roughy has endured his fair share of obstacles in the last few years.

In 2011, he ruptured his Achilles and he fought back, and last year he had the initial melanoma removed and came back to win a premiership.

On each occasion, he remained positive.

In a sport that splits loyalties and evokes so much passion from fans, it is very rare that a player is universally loved.

It’s even rarer if that player comes from a successful club like Hawthorn.

That combination doesn’t really endear itself to the football public but Roughy is an exception.

I can honestly say that I’ve never heard anyone say a bad word about him.

People are drawn to him. They love his laconic, humorous and laid-back approach to life.

The support he has received from the footy community shows how much respect people have for him.

Knowing him as well as I do, when he says he will beat this and come back and play football, I have absolutely no doubt that he will.

In the meantime, we are here for him. We will be supporting him every step of the way.