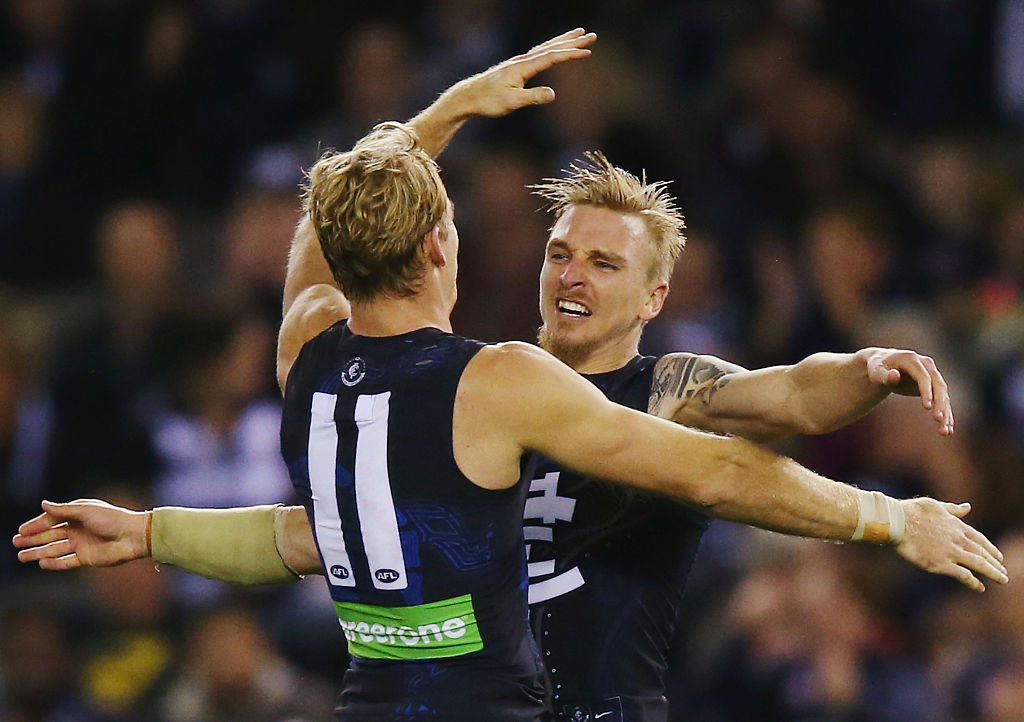 Undermanned Carlton have stunned premiership fancies Geelong by 19 points in a massive upset.

It was Carlton’s first win against Geelong at Etihad Stadium in 15 matches.

It is also the second upset loss in a row for Geelong, following last week’s poor performance against Collingwood.

Questions will now be asked of Geelong, who were listless and received a big spray from coach Chris Scott at quarter time.

By contrast, the Blues have an outstanding 5-5 record under new coach Brendon Bolton.

The Blues suffered a double blow in the first quarter when captain Marc Murphy and Liam Sumner were forced from the field because of injuries, leaving them two short on the bench.

But scores were level at the first break and the Blues could not be faulted for their workrate.

The Cats briefly took the lead at the start of the second term, but the Blues kept pressing.

Two goals just before halftime – the second following a 50m penalty – gave Carlton a 20-point lead at the main break.

Geelong’s scratchy form continued as the Blues refused to go away and Carlton still had a 19-point break at the last change.

The Cats kicked two goals in a row early in the last term to trail by only 18 points, but Carlton steadied quickly to snuff out the challenge.

Bulldogs too good for sore Magpies

Meanwhile, the Western Bulldogs ran over the top of injury-ravaged Collingwood to claim a 21-point victory at the MCG.

When young forward Darcy Moore went off early in the last quarter with a game-ending shoulder injury the Magpies were left with no fit players on the interchange bench.

Alan Toovey was the first Magpie to depart the match after being heavily concussed in the second term.

The injury curse got much worse for the Magpies in the third quarter, with midfielder Taylor Adams suffering a left hamstring injury, while forward Alex Fasolo had his match ended by a left shoulder injury.

Moore’s shoulder injury was the final straw with Collingwood unable to make any interchanges for most of the final term.

The Magpies still held a three-point lead at the final change but they were eventually swamped by the Bulldogs, who kicked five goals to one in the fourth quarter to win 11.8 (74) to 7.11 (53).

The Bulldogs kicked the final four goals of the match.

The Suns have now lost seven AFL games on the trot, with their average losing margin during the past five weeks a worrying 87 points.