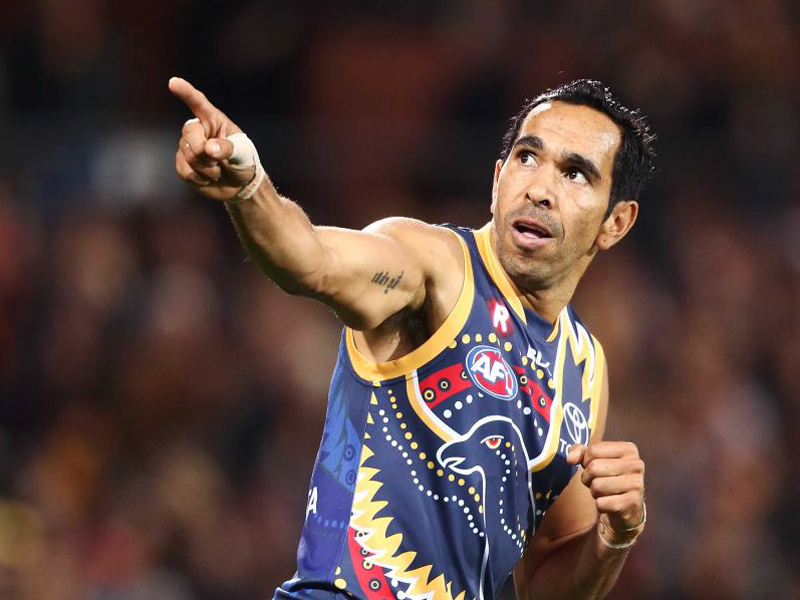 The Adelaide Crows have halted GWS’s momentum with a blistering second-half display that secured a 22-point win and left the Giants reeling.

The Giants had been the league’s form team coming into the match after a streak of six wins, but they were second best to the Crows for much of the night.

Only wayward kicking kept the visitors in the contest for the first half, but what was a two-point deficit at half-time quickly blew out with Adelaide earning a 15.17 (107) to 13.7 (85) win.

Adelaide’s third quarter was its best since 2001, as the goals flew in from all angles and the Giants found themselves completely helpless.

But, impressively, the Giants rallied with a spirited fight back in the last quarter, but it proved too little, too late.

The midfield load was well shared by Adelaide, but it was up forward where the magic happened, and never more so than when Eddie Betts went to work late in the third quarter.

With the ball creeping towards the boundary line and with the closest players happy to let it harmlessly roll out, Betts pounced to seize possession and somehow keep the ball in play.

With his arm still outstretched and the boundary line lurking, Betts evaded a tackler, cut inside and snapped what may well end up the goal of the year – from the same pocket he slotted last year’s winner.

As one of the league’s most sensational Indigenous players, there was little doubt Betts would step up in Indigenous round and so it proved, with the little genius kicking five goals and making the most of an often-open Crows forward line.

Tigers roar in clash with Bombers

Richmond’s AFL season continues to gain momentum, with the Tigers defeating Essendon by 38 points in their Dreamtime at the ‘G clash for their third win in a row.

Martin continued his stunning run of form with a career-high 38 possessions, while Trent Cotchin, Brett Deledio, Brandon Ellis and Shaun Grigg were influential.

After leading by 16 points at half-time, the Tigers played some breathtaking football as they leapt out to a 36-point advantage.

But John Worsfold will have plenty of positives to point out to his players, perhaps most notably the way they fought out the game.

Brendon Goddard and David Zaharakis led the way for Essendon and youngster Darcy Parish continued to excite thanks to his eye-catching 25-disposal effort.

Hawthorn’s 48-point win over the struggling Brisbane Lions may not come as much surprise to most footy fans, but the home side’s performance for more than three quarters of the match surely would have.

In a match loaded with sentiment thanks to the AFL’s annual Indigenous round and the advent of Jordan Lewis’s 250th, the Lions consistently threatened to upset the reigning premiers in front of a modest Gabba crowd.

Tom Bell kicked four and Dayne Zorko performed in the midfield as the Lions kept pace with the Hawks until midway through the fourth quarter, when a burst of goals took the game away from Brisbane in the blink of an eye, winning 21.9 (135) to 13.9 (87).

Cyril Rioli was as influential as ever, kicking five goals and picking up 19 possessions while Lewis celebrated his milestone with a dominant showing — 42 disposals and a goal will surely convince umpires to reward him with three votes once Brownlow night rolls around.

Lions coach Justin Leppitsch has implored fans and pundits alike to give his young side time to develop, and his optimism did not appear entirely misplaced as the likes of Josh Schache, Lewis Taylor and Nick Robertson showed more glimpses of potential.

Still short of their excellent best, the Hawks will be relieved to have kept pace with the top four with another important win.

Gun recruit Dixon arrived at Port Adelaide to questions about his commitment to being an AFL player.

On Saturday, the imposing forward took another step towards proving his doubters wrong.

Dixon’s five goals, three of which came in a game-defining second quarter, were pivotal in Port’s 45-point win.

The 202cm star’s aerial prowess was eye-catching in the Power’s win in front of 5146 fans at Traeger Park.

But it was the follow-up work by Dixon, who was suspended by Gold Coast for drinking the night before a game, that pleased Port coach Ken Hinkley the most.

“When Charlie came to our club, I said I know our boys will get very, very quickly in love with (him) the way he works for their team,” Hinkley said.

“We couldn’t be more pleased with Charlie Dixon. He’s delivered today some goals but what he delivers every week is a fair-dinkum contest and that’s what we love.”

For Hinkley, Dixon’s industrious performance was just the sort needed for 10th-placed Port to become a contender again.

Port’s makeshift ruck brigade was monstered by dominant Melbourne big man Max Gawn (48 hitouts, two goals) but the Power’s hard-working midfield managed to break even at the stoppages and move the ball with precision.

Melbourne coach Paul Roos was left to rue a wasteful performance from his young side, who showed moments of individual brilliance but paid the price for lapses.

Forward spearhead Jesse Hogan booted three goals but received little help as the Demons continued to turn the ball over and star Jack Viney was tagged out of the game by Brad Ebert.

“We were terrible defensively,” Roos said.

Saints in hunt for top-eight spot

Fremantle once again failed to break its 2016 duck, wasting a spirited comeback to eventually succumb to the Saints by 34 points.

Having burst out of the blocks to kick the first four goals of the game, St Kilda looked as good as home at the quarter-time break as Fremantle struggled to fire a shot.

But after a furious spray from coach Ross Lyon at quarter-time, the Dockers responded by playing much more like the team we expected to see this season.

The lead had been trimmed by half-time and overturned by the end of the third, with Freo leading by as much as three goals late in the third quarter and boasting all the momentum.

It looked difficult to see where a St Kilda response could come from, but the hosts found a way. The Saints forward line began to fire again, while the likes of David Armitage and Jack Steven in the middle took the game over.

St Kilda kicked nine straight goals to heap late humiliation on the Dockers, who completely shut down after three-quarter-time managing only three behinds for the final term.

Freo now sits at 0-10 and in utter disarray, while the Saints remain in the hunt for a top-eight spot.

Adelaide and Richmond living the ‘dream’