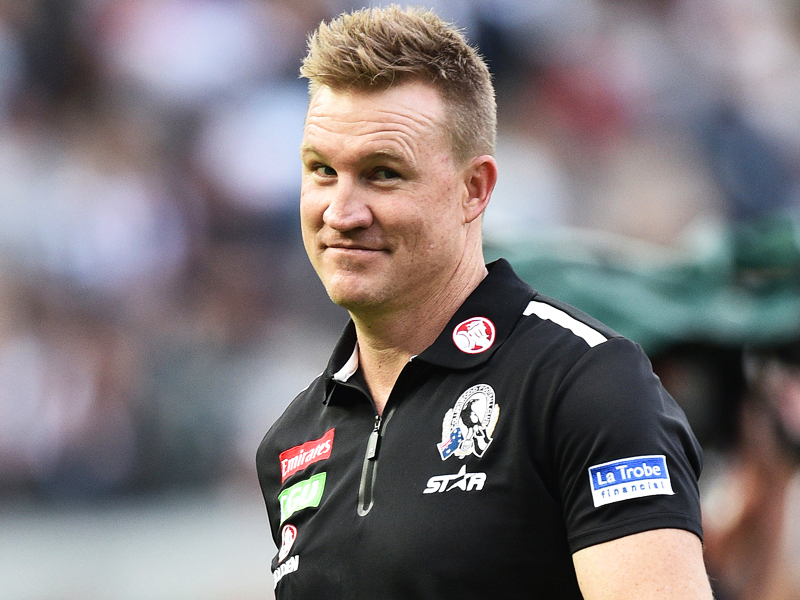 Collingwood coach Nathan Buckley at least has a good draw to work with in 2018 Photo: AAP

The Magpies did the damage in the opening half-hour, keeping the Cats goalless in the first quarter to win 104 to 80 on Saturday.

After leading by 44 points at quarter-time, the Magpies’ edge was reduced to just eight in the final term as the Cats mounted their challenge.

Two goals in the final term by Tom Hawkins brought the Cats within nine points, but Collingwood clung on.

Jesse White and Alex Fasolo nabbed a pair of goals each, alongside majors to tireless runners Pendlebury, Treloar and Jack Crisp.

All three midfielders were excellent on a day when the Magpie engine, led by Sidebottom in his 150th game, had no passengers.

Just a week ago, coach Buckley headed to Brisbane under extreme pressure with only an Anzac Day win in the past month.

On the same weekend, the Cats were installed as outright premiership flag favourites after purring to a sixth-straight win.

But on Saturday afternoon, the Magpies snapped the form-lines in stunning style, becoming the first team to beat the Cats this season in Victoria.

The Crows dominated an injury-depleted Gold Coast at home by 75 points.

The result seemed inevitable after Adelaide went into the Metricon Stadium clash as unbackable $1.04 favourites against a Suns outfit with just five AFL-listed players available for reserves duty.

West Coast buried some road demons with an eight-point AFL win against Port Adelaide – its first away win in seven trips.

The victory was punctuated by Andrew Gaff being crudely knocked out by Port’s Tom Jonas, a third-term act certain to result in suspension.