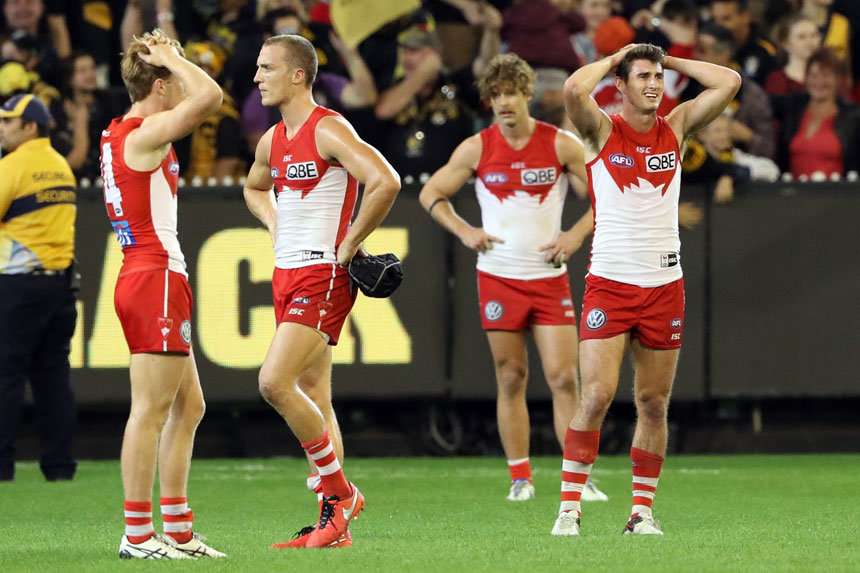 Clashes between Hawthorn and Sydney in recent years have been fierce.

And although the Hawks thumped Sydney at Stadium Australia last year, they did play out a thriller in Round 8 at the MCG – which the visitors won by four points.

Another close clash was expected between two sides who are 6-2 to start the season, but the sad news surrounding Jarryd Roughead’s new cancer battle means the Hawks face a tough task to switch on.

They’ve proven experts in dealing with adversity in recent years but this looks tough for them.

Cyril Rioli will at least be back for the Hawks against a Swans side who will have no shortage of motivation.

Their capitulation against Richmond at the MCG last Saturday was overshadowed by Sam Lloyd’s heroics, but, on the same ground less than a week later, they’ll be out to hit back.

Sydney should shade the contested battle with Josh Kennedy back – and that might just prove to be the difference. Lance Franklin might have a fair influence too.

Must watch
The Giants are flying and are favoured to beat the Bulldogs at Spotless Stadium on Sunday. But Luke Beveridge’s side are contested ball kings and, although they are undermanned, are sure to present a challenge. This is a litmus test for GWS.

Most at stake
Gold Coast have lost five in a row and been belted in recent weeks. Effort should never waiver week to week like it has for the Suns and they simply can’t afford another big loss. But the Adelaide Crows score freely and can make life very difficult for them. Rodney Eade has to get his players up for this.

Will happen
North Melbourne won’t have any problems against the Blues. Lock in a 9-0 start for them. Yes, Carlton have improved, but no Matthew Kreuzer and Andrew Phillips in the ruck means Todd Goldstein will have a field day for the Kangaroos. So will their midfielders.

Won’t happen
A club won’t throw it away like the Swans did last weekend. Their example of how not to shut a tight game down will have been shown at all clubs this week. If it’s tight, expect clubs to know what to do in the closing stages.

One to watch
Jacob Hopper’s debut performance last week was nothing short of brilliant. He slotted into GWS’ midfield, which is super talented, with ease. A tougher test against the Bulldogs awaits but I’m not sure we’ve ever seen a better debut.

Feeling the heat
Justin Leppitsch. Queensland footy stinks and calls for the league to step in and rescue it can’t be a good look for the Lions coach at present.

Pick me
Fremantle’s Michael Barlow dominated in the WAFL last week, amassing 39 touches and 12 marks. Barlow’s itching to take on the Tigers this weekend, and his WAFL form is hard to ignore.

The whisper
Which senior player has put noses out of joint at his club with his training habits?

Don’t set the IQ
Gold Coast vs Adelaide. The Crows will win – and do it easy. Go and support some local football on Saturday afternoon instead.