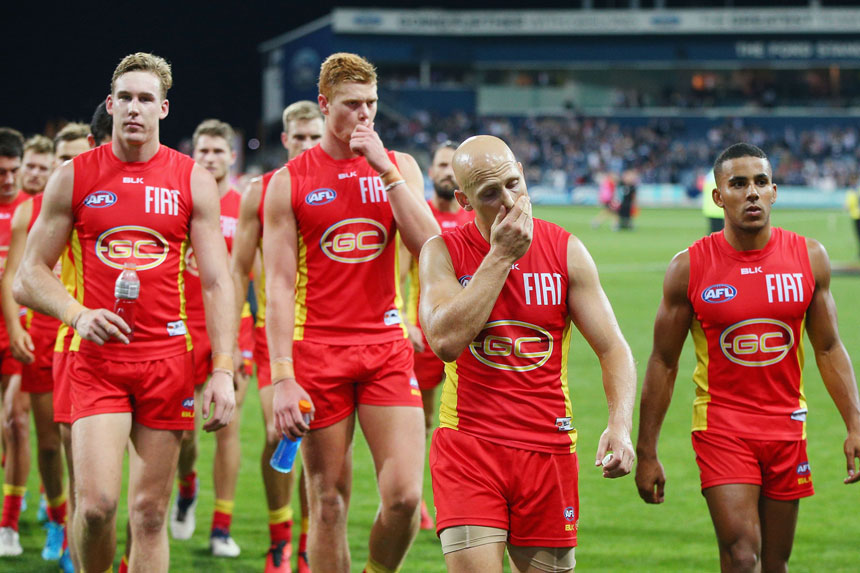 The Gold Coast Suns need to make some critical decisions.

Do they concede they got their initial set-up wrong and rebuild? Or do they continue on their current path?

I feel a rebuild is necessary.

• Low footy crowds starting to raise alarm bells
• The AFL’s newest coach might just be the best
• Campbell Brown: How the Hawks nearly missed out on Burgoyne

In Harley Bennell and Charlie Dixon, the Suns lost two of their best six players in the off-season.

And my gut feel is that Jaeger O’Meara will join them in walking out the exit door at season’s end.

I spent three years at the Suns, after nine at Hawthorn, one of the best clubs in the competition with a strong culture and a coaching genius in Alastair Clarkson.

At the Hawks, I experienced first-hand how a club needs to be built to be successful. And then I went to the Gold Coast.

The difference in environments was stark.

I realise by writing this that I’ll get people saying I’m just a disgruntled former player. Or I’ll be abused because of the way I left the Suns.

But culture at a football club dictates success.

When ‘Clarko’ took over at Hawthorn in 2005, he immediately moved to address training standards, tardiness and professionalism.

These areas were not at a professional level when I was at the Gold Coast.

You would expect that with such a young list, but with so many impressionable players, it was imperative that these standards were set right from the outset.

Who is responsible? The coaches and senior players.

The turnover in staff over the last six years at the Suns has been alarming.

And it’s been across all areas – assistant coaches, development staff, changes in the leadership programs and, most tellingly, in the fitness department.

The Suns have had five different guys running their fitness department in six years. First it was Dean Robinson, then Andrew Weller, Stephen Schwerdt, Matthew Kennedy and now Justin Cordy.

Almost every year, they have sacked their head of fitness.

Each person comes in with different, individual philosophies about the best ways to train.

No method is right or wrong but all are different on the body and take time to adjust to and improve on.

Crucially, just when a player builds a relationship with the fitness coach, and he learns about a certain player’s running style and injury history, they are moved on.

Compare that to Hawthorn. They’ve had the same head of fitness, Andrew Russell, since 2005.

In the weights department, three different coaches in three years has had a similar impact on the development of players in the gym.

Gold Coast’s injury list over the last three years has been horrendous. I’m sure the chopping and changing of coaches played a part. The body loves routine.

With such a young list, they wanted to get games into players to make them develop.

But there was a feeling among the playing group that it didn’t really matter how some of the young players performed and that they would be picked the next week regardless.

This brought on resentment with some of the players in the reserves, firstly to the coaches and then to the other players.

It bred complacency in the young guys and meant they didn’t work on their weaknesses as much as they should have.

It eventually eroded the integrity of selection.

They say you become a much better player after 50 matches.

But that’s only true if it’s complemented by a strong game plan, team rules, structure, discipline, culture and the fear of getting dropped.

When both the Suns and GWS were formed, they were allowed to pick 12 of the best 17-year-olds in the country.

Just five remain at the Suns, with Trent McKenzie the only AFL regular.

The club even wasted a pick on Alex Keath, now a rookie at Adelaide, who had already declared that he was going to be concentrating on cricket.

Included in the Giants’ 12 picks were Jeremy Cameron and Dylan Shiel, who both developed into superstars.

Cameron kicked seven goals against Gold Coast on Saturday and Shiel had 35 disposals. Another member of that list, Nathan Wilson, is having the best season of his career and looks like becoming a high-quality player.

The club’s training standards, selection process and staff turnover in their formative years has stalled their development.

Rodney Eade has inherited a list far inferior to what he thought upon arrival.

The AFL gave the Suns the best young talent in the land. But talent only gets you a foot in the door at the elite level.

They are finding out the hard way.

Campbell Brown: Suns paying the price for past decisions