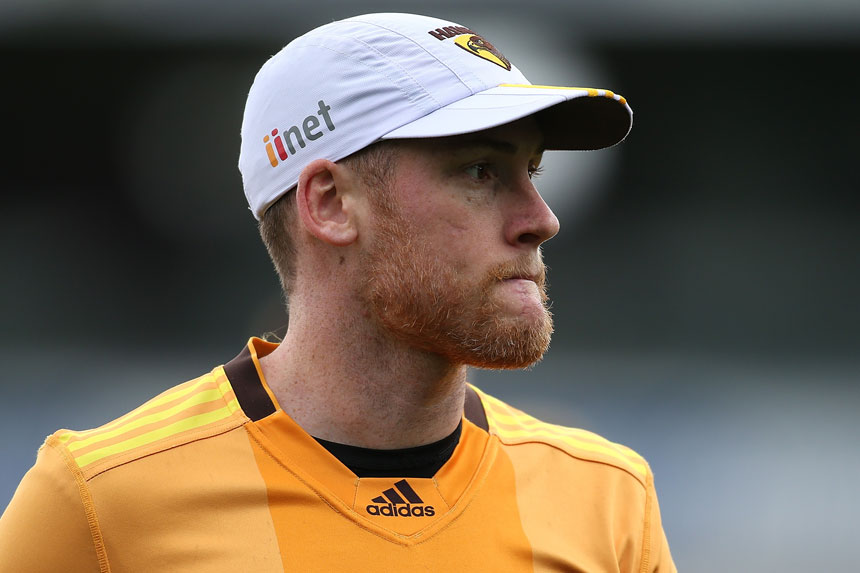 Jarryd Roughead is heading to St Kilda to help with development. Photo: Getty

Hawthorn midfielder Jordan Lewis has battled to contain tears as he spoke of how best friend Jarryd Roughead has been “hit hard” by a recurrence of melanoma.

Roughead, who had a cancerous growth removed from his lip in 2015, told teammates the latest diagnosis on Tuesday.

An emotional Lewis, who was best man at Roughead’s wedding, and vice versa, gave an insight into the 29-year-old’s mental state in a powerful segment on Fox Footy’s AFL 360 on Tuesday night.

“Certainly the news he got yesterday has shaken him up.

“Any form of cancer is serious but it’s going to be a very tough road for him. We’re all there for him.

“It hit him hard. When we were both at the club [today]. We just sat in our player development office and we had a bit of a cry.

“No words were needed. The seriousness of it would break anyone down.

“He’ll have a biopsy and that will eventuate into some form of treatment. The timeline is a bit unsure at the moment.

“Once he has that biopsy, he, and the rest of us, will be a little bit more clear.”

On Tuesday evening, the Herald Sun reported that melanoma had spread internally and that Roughead was likely to need radiotherapy or chemotherapy.

Roughead, who has won four premierships with Hawthorn and kicked 491 goals, has not played in 2016 due to a knee injury. He was expected to return before the end of June until this latest diagnosis.

Lewis said Roughead was itching to play again and spoke of his significance in the football world.

“He was really looking forward to coming back. He’s such a resilient guy and he’d put in a lot of hard work,” he said.

“[But] that is secondary to what we are dealing with at the moment and that’s his health and making sure he’s okay.

“He is just one who is just loved by everyone. By footy fans for the way that he plays – and by the way he conducts himself off the field.

“That was shown today in the outpouring of support and tweets … he’ll need all of that.”

Lewis acknowledged it would be tough for the club to focus properly on Friday night’s blockbuster against Sydney – but that it would be what Roughead wanted.

“It was a pretty emotional time,” he told Fox Footy.

“It was pretty hard to see someone you really care about in a situation like that.”

Support from the football world

Richmond forward Jack Riewoldt, who also had a cancerous melanoma removed, backed Roughead to win the fight against cancer.

“I’ve seen first-hand the process that you’ve got to go through to get yourself in the clear,” he told Fox Footy.

“Knowing ‘Roughy’, he is certainly up for the fight. It can be very scary … he’ll get through it.”

Geelong’s Joel Selwood also wrote on Twitter: “Get well @jr3502 from the Cattery!”.

Western Bulldogs coach Luke Beveridge, previously an assistant coach at Hawthorn, said: “‘Roughy’ is a close friend of mine and it’s a bit distressing.

“He’s got enormous courage and support around him. I hope he’ll be fine.”

Many other clubs posted messages of support.

‘We care more about the people’

“Footy’s our business, but we care more about the people who work here than the football,” he told Hawks TV.

“We’ll get around ‘Roughy’ and look after him and his family and we’ll keep our fingers crossed for a great outcome down the track.”