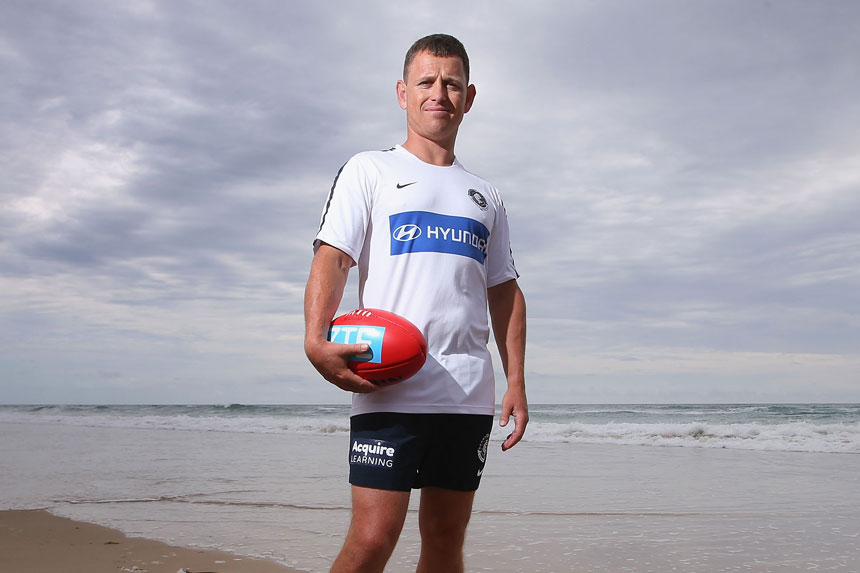 We might only be eight weeks into the 2016 season but Brendon Bolton is laying a serious claim to being the coach of the year so far.

In 2014, Bolton, serving as interim coach, guided Hawthorn to five successive wins when Alastair Clarkson was diagnosed with Guillain-Barrè syndrome.

He’s aiming for the same feat this weekend – but, amazingly, it’s with a Carlton side who were tipped to barely win a game this season.

Sure, the Blues will have their hands full trying to contain the undefeated ladder-leaders North Melbourne at Etihad Stadium on Saturday.

But even a big loss wouldn’t deter Carlton fans.

They know, for the first time in years, they have a plan. And they can see their team growing before their eyes.

Bolton has reshaped them.

Some will say the Blues have never really recovered from the salary cap breaches that hit the club in 2002, winning four wooden spoons since.

Brett Ratten looked to be starting a revival, but was then replaced by Mick Malthouse, and we all know how sour that ended.

But Bolton, a former school teacher full of fresh ideas on how to shape and guide young men, has unified the playing group – and in doing so, rejuvenated the Blues faithful.

How has he done this? It’s quite simple. Bolton is a people person. He builds relationships.

He is connected with his players and he encourages his playing group to pursue off-field interests as it builds character. He also puts himself on the same level as his players.

We saw this in ‘The Journey’, a short documentary that aired on Fox Footy based on Bolton’s first few months as head coach of Carlton.

On a training camp in Bolton’s home state of Tasmania, Carlton’s newest batch of draftees, including number one selection Jacob Weitering, were forced to dive into a river as punishment for Charlie Curnow breaking a camp rule.

Bolton didn’t stand on the boat and watch his new kids dive into the cold water. Bolton dived in with them. One in, all in.

For Carlton’s draftees, they were woken at 5am and quizzed on their new teammates – what’s their favourite movie? What school did they go to? What’s their dog’s name?

He isn’t just building relationships with his players. He’s building it amongst them.

Bolton has Carlton playing a professional, tough-to-beat style of football.

They defend well inside 50 and make their opposition work extremely hard to transition it out of defence.

Port Adelaide continually broke down in that area at Docklands on Sunday, keeping the Blues in the game until they found their rhythm late and claimed a thrilling two-point win.

The Blues are clearly committed to the cause and they’re playing for their coach.

Marc Murphy and Bryce Gibbs are having much better seasons compared to last season.

Dale Thomas is in the best form of his Carlton life.

Players from other clubs have been given a chance, and they are repaying the faith, such as Liam Sumner, Sam Kerridge, Jed Lamb, Andrew Phillips, Lachie Plowman, Matthew Wright, and even Liam Jones.

Described by 250-gamer Kade Simpson as an “absolute legend”, Bolton had the task of mission impossible coming into 2016.

And while this season may only be two months in, so far at least, he is passing with flying colours.

The AFL’s newest coach might just be the best