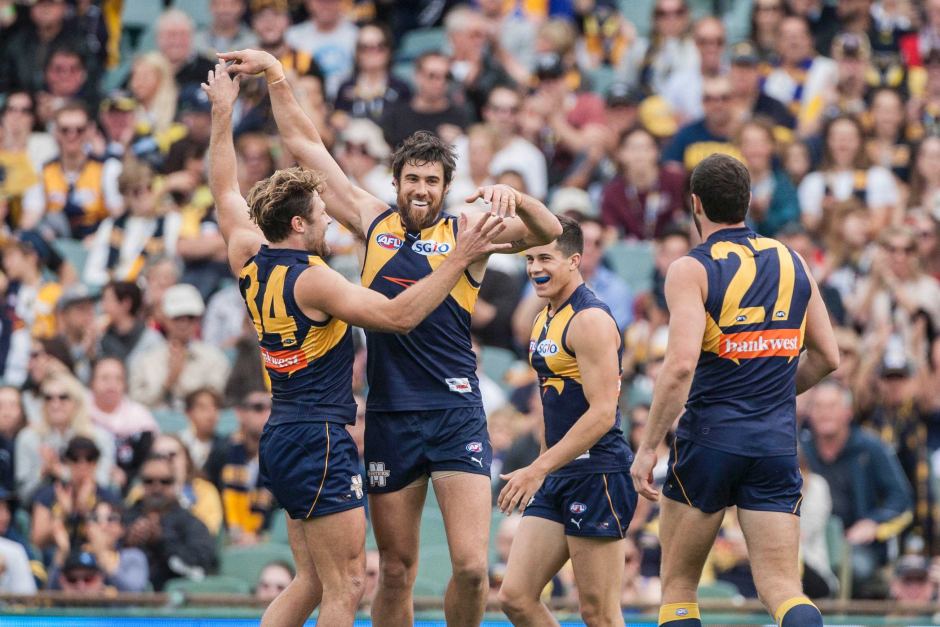 Kennedy booted five goals in the first quarter to set up the 20.12 (132) to 3.11 (29) romp, with the Eagles never challenged after kicking the first nine goals of the match.

The victory was West Coast’s biggest ever triumph over St Kilda, eclipsing the 95-point margin they beat them by in Perth last season.

St Kilda skipper Nick Riewoldt tried his best to stem the flow by roaming to all parts of the ground, but West Coast’s dominance of the midfield battle meant the result was only ever going to go one way.

The victory lifted West Coast (5-3) back to within striking distance of the top four, but they are yet to win on the road this season – a situation they can change in Saturday’s clash with the Power at Adelaide Oval.

Liberatore laid an astonishing 19 tackles in the match, equalling Jude Bolton and Jack Ziebell’s VFL/AFL record for most tackles in a game.

Bulldogs coach Luke Beveridge was in awe of Liberatore, who was responsible for more than a quarter of the Bulldogs’ 68 tackles.

“That’s quite extraordinary,” Beveridge said of the 23-year-old, who missed the entire 2015 season because of a knee reconstruction.

“It sets a great example for his teammates and I think over the last two or three weeks he’s probably just started to get his mojo back.”

Bulldogs Marcus Bontempelli and Luke Dahlhaus were both dominant in the middle, while Jack Redpath and Jake Stringer booted a combined eight goals.

Carlton withstood a tide of injuries to snatch a last-gasp two-point victory over Port Adelaide at Etihad Stadium.

The ruckman kicked Carlton into the lead late into time-on in the final quarter after the Blues had trailed for much of the match.

The Blues were undermanned and undersized after taking hits to their key players, with Casboult’s ailment diagnosed as a broken tibia requiring up to eight weeks out.

Patrick Cripps, Lachie Plowman, and Kreuzer all needed attention through the afternoon, leaving the Blues with just two on the bench for long spells.

Despite the two clubs’ vastly different expectations for the season, both are now 4-4 in the win-loss, with Carlton nabbing a fourth-straight success.