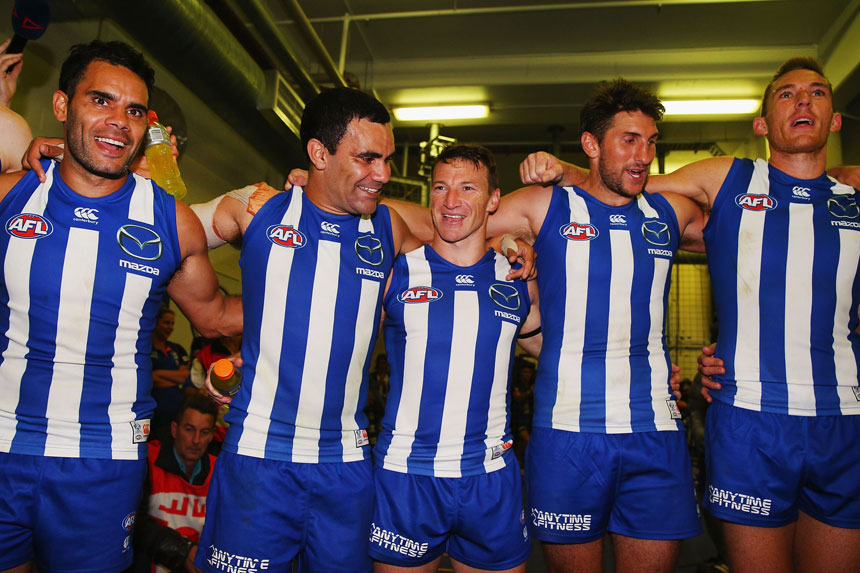 North Melbourne’s barnstorming start to 2016 is impressive and all the more poignant when one reflects on their ageing list.

Clubs in the modern era are expected to flounder when a list becomes too old.

Relying on club veterans who should be losing their competitive edge puts extra pressure on youth to pick up the slack. They’re all factors North has put to the sword thus far.

North contains the second-oldest list in the AFL (players are 25 years and 55 days old on average), behind struggling Fremantle, which illustrates the contrasting fortunes of ageing demographics.

Although North Melbourne have enjoyed an easy fixture, vital contributions from veterans in Brent Harvey, Drew Petrie and the once enigmatic Jarrad Waite have been critical.

North Melbourne’s premiership window may be closing, but when a club has the opportunity to usher in new and developing talent around ageing stars in form, it can only benefit their playing group as a whole.

It might result in what finally could be the year of North Melbourne, who should easily account for Essendon on Saturday.

Must watch
Ex-Crow Patrick Dangerfield makes his way back to the Adelaide Oval to take on his old club on Friday night. Geelong sit second on the ladder and Dangerfield is a big-game player. Watch for him to put his old team to the sword and fire up the Adelaide Oval crowd in the process.

Collingwood are struggling and the blow torch is firmly on coach Nathan Buckley to avert further disaster this season. A win on the road against fellow cellar-dwellar Brisbane is a must to silence the doubters.

Will happen
Fremantle will go 0-8. Hawthorn host Fremantle at their Tassie fortress in Aurora Stadium and will be boosted by the return of champion Sam Mitchell. This is too much for Ross Lyon’s men.

Won’t happen
Richmond are due a win but Sydney has too much talent and fire power for the battling Tigers. Damien Hardwick faces another tough week.

One to watch
Saints skipper Nick Riewoldt has been in red-hot form, clunking 16 marks last weekend alone. Enjoying his freedom on the wing, Riewoldt seems set to continue on his merry way against a patchy West Coast Eagles.

Trending
Who would have thought a scoreboard shot clock would create so much furore and backlash? Mason Wood was well within his rights to milk down the clock, and, given the publicity it received this week, look for players to follow his lead if they are presented with a similar situation.

Feeling the heat
Gary Ablett Jnr is copping plenty of heat after yet another big Gold Coast Suns loss. He isn’t is meeting his own personal expectations where form is concerned, either.

Pick me
Whilst the Demons continue their impressive form, former captain Jack Trengove continues his push for a long-awaited recall after multiple setbacks, collecting 23 disposals and kicking an impressive goal last weekend.

The whisper
A former Port coach is being wooed back to the club in a player development capacity, with a large pay cheque being the tempter.

Don’t set the IQ
Richmond’s clash with Sydney has scrappy Swans win written all over it. You could almost write the script now. Tigers have a crack but struggle with skills and Sydney do enough to win by a few goals. It’s on Saturday night too – you’ve got better ways to spend your time.