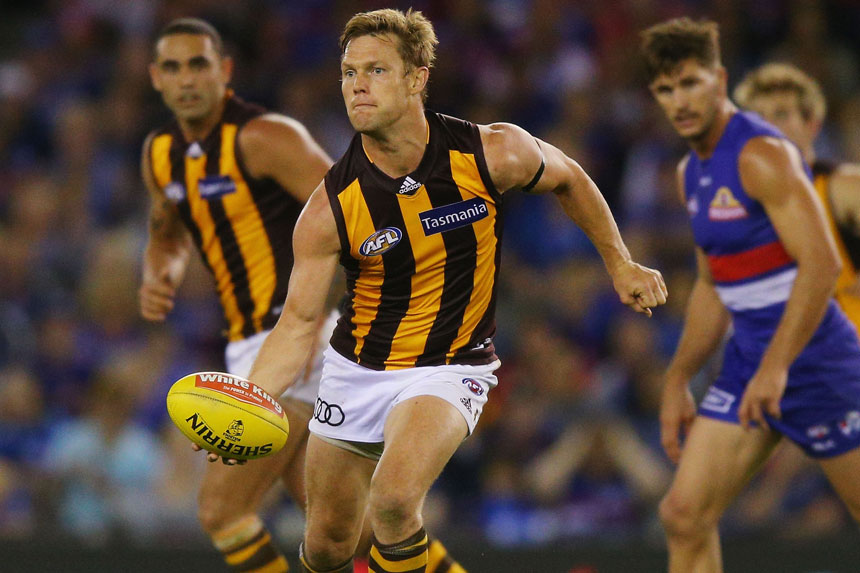 Hawthorn star Sam Mitchell is confident the three-time defending premiers will be stronger in the second half of the season.

Without playing their best football, the Hawks have won five of their first seven matches to sit sixth on the AFL ladder.

A 75-point loss at Greater Western Sydney in Round 6 had many writing the Hawks off but Alastair Clarkson’s side bounced back well against Richmond last week.

And a nine-goal last quarter from a youthful Hawks side particularly impressed Mitchell, who watched on from the coaches box due to a corked calf.

“The only game we’ve played even close to that (last quarter) was Round 2,” Mitchell told SEN on Tuesday.

“It was certainly close to the way we would want to play.

“In pre-season we talked a lot about trying to get young guys games and not just one or two, but trying to give them four, five, six or seven in a row.

“It’s going to hold us in good stead as we go.

“When some of our other (injured) guys come into the side, there’s going to be a hell of a lot of competition.

“A lot of it (selection) has been forced through injury … it’s a great learning curve for these kids.

“We’ve been able to win games without playing anywhere near our best and that’s important.”

Mitchell, James Frawley (concussion), Luke Hodge and Jarryd Roughead (both knee) were on the sidelines for Hawthorn last week.

The 33-year-old midfielder, who is one of the favourites for the Brownlow Medal and is averaging 33.8 disposals per match in 2016, expects to be back against Fremantle in Launceston on Saturday.

“I got kneed in the calf the game before (against GWS). It wasn’t good enough so (I) had to pull the pin,” Mitchell said.

“I should be fine (for this weekend). It’d be very rare for a little knock in the calf to take two weeks.”

Mitchell was also glowing in his endorsement of GWS, but doubts whether they can maintain their early season form right throughout 2016.

“They were very, very good against us,” he added.

“Their best footy is going to be certainly good enough to get up there. It’s going to be a sustainability thing for them.

“If they play every week the way they played against us last week, they’ll win the flag.

“But it’s very hard to replicate your best performances. You can’t play your best footy every week and we understand that at Hawthorn.”