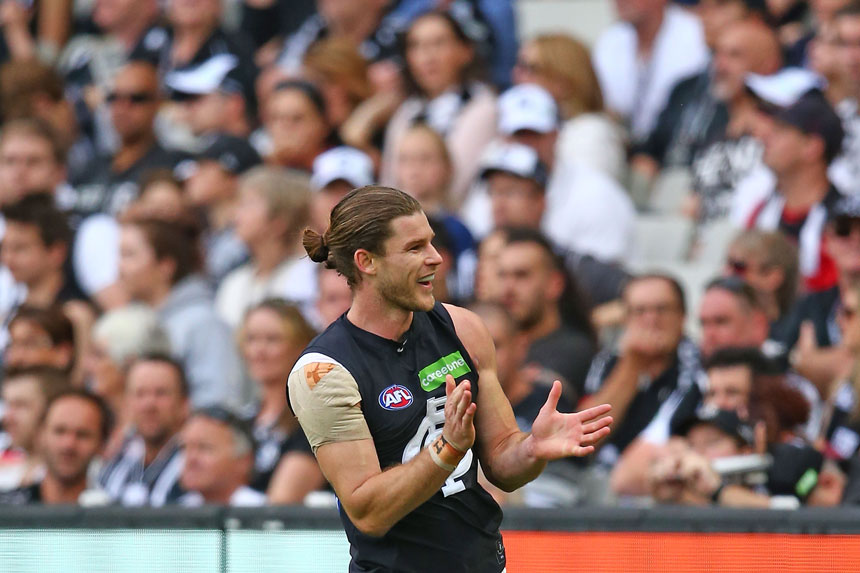 When Mick Malthouse was appointed as Carlton coach in 2012, all the talk coming out of Princes Park was about the club’s push for an elusive 17th premiership.

He didn’t even last three seasons, sacked with Carlton propping up the ladder and the prospect of another arduous rebuild on the cards.

But the arrival of Brendon Bolton from the successful Hawthorn, and top draft pick Jacob Weitering, and all of a sudden, the Carlton swagger is starting to return.

They’ve won three games on the trot for the first time since 2013 and are playing with renewed vigour.

It is no secret that Carlton’s list is still below average – and that they have a long way to go.

But Stephen Silvagni has been brought in from Greater Western Sydney to specifically address this issue and has already begun the process of acquiring talent from other clubs, most notably Sam Kerridge and Matt Wright, who have already had a big impact.

What Carlton lack in skill, they make up for in discipline and execution of game plan.

Having been trusted by the best in the business to handle the reins at Hawthorn, Bolton’s appointment was largely seen as an astute one.

By implementing structures that have been successful at Hawthorn, Bolton has been able to drastically improve Carlton’s defence, having it ranked sixth in the AFL after Round 7.

This is in comparison to 2015 when Carlton had the worst defence in the AFL.

The improved backline has allowed Carlton to stay in games for longer and this was exemplified in their stirring win over Fremantle in Perth in Round 5.

Whilst it was an awful game to watch for the neutral, the Blues were able to hang around in the contest for long enough and eventually their cream was able to rise to the top and get them over the line.

Carlton’s forward line is anaemic as ever and is one of Bolton’s biggest conundrums.

The combination of Levi Casboult and Liam Jones doesn’t strike fear into many defenders and all the elite small forwards they had on the list – think Eddie Betts and Jeff Garlett – now wear the colours of rival clubs.

Even with Casboult and Jones, though, Bolton has been able to extract something out of them.

And they’ve both played their part in recent wins with clutch last-quarter goals.

Carlton were expected to be thrashed by Collingwood at the MCG but the Blues exposed the deficiencies of their opponents in a stirring 15-point win.

Particularly notable was Carlton’s organisation and their ability to constantly block the Magpies coming out of the defensive 50.

It has been a long time since Carlton tasted success and it appears that the boardroom has finally shed the mentality that you can still “buy” premierships.

The Blues appear to be going down the tried and true route of building through the draft and recruiting elite kids like Patrick Cripps and Weitering.

With these two, Carlton fans have every reason to want to go to the footy and watch their potential superstars develop.

Why the Blues are back in town under Bolton