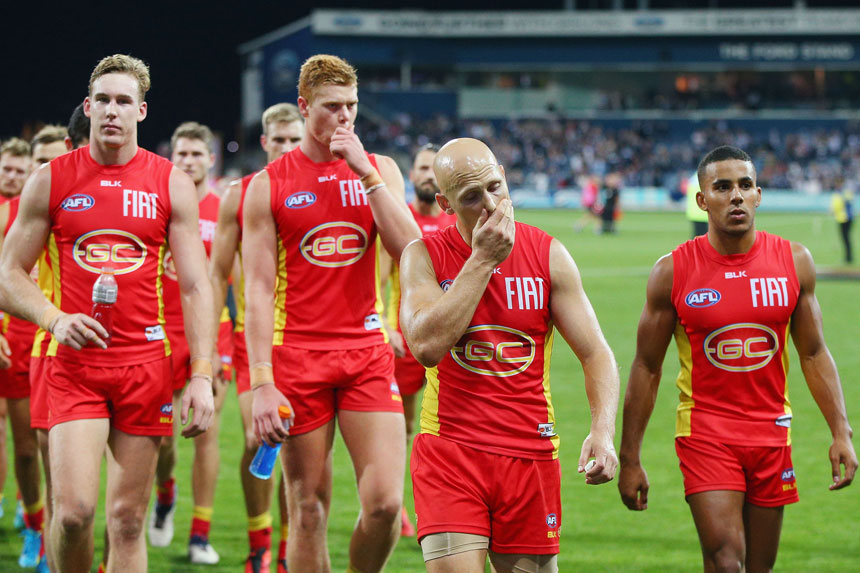 Despite injuries in the pre-season, and Gary Ablett Jnr returning from a shoulder that sidelined him for most of 2015, the Suns were tipped to have a successful year in 2016.

Three wins from as many matches to start the season added weight to those claims.

But those victories against Essendon, Fremantle and Carlton don’t look that good in hindsight.

They then lost to strugglers Brisbane before falling apart late against North Melbourne. And last week’s 120-point belting at the hands of Geelong was terrible.

They didn’t apply themselves and their lack of sustained effort was seriously alarming.

Ablett Jnr is struggling for form himself and the Suns are getting very little return from their depth players.

They boast a list of players that has the potential to be a contender, however, potential is a dirty word and each year they have struggled to live up to the hype.

Ablett Jnr’s willingness to compete is a hot topic at the moment. And if their leader is struggling, what hope do they have of achieving success this season?

Must watch
Surprisingly, it’s Richmond v Hawthorn on Friday night. The Hawks need to get back on the winner’s list against a team who, somehow, often finds a way to beat them. The loss of Luke Hodge is a big blow for the Hawks.

Most at stake
If the Bulldogs lose to Adelaide, they will drop out of the top four. They have failed twice against two contenders and they can’t afford to fail again against another.

Will happen
Carlton will beat Collingwood on Saturday afternoon and be above both them and Richmond. Get ready for the Pies meltdown.

Won’t happen
Hawthorn putting in another performance like the one they served up against Greater Western Sydney. Alastair Clarkson simply won’t allow it to happen.

One to watch
Matthew Wright. He has reignited his career at Carlton after being let go from Adelaide. He has always had the talent; all he needed was the opportunity.

Trending
Further confusion over the deliberate out-of-bounds rule. The AFL rules committee has the right intentions, but the umpires are too eager to enforce it.

Feeling the heat
Nathan Buckley. What will happen to the club’s favourite son should arch-rival Carlton beat them on Saturday afternoon?

Pick me
Exciting Adelaide forward Wayne Milera returned from a quad injury in the SANFL with 22 disposals and three goals. He will no doubt be heavily considered for the match against the Bulldogs.

The whisper
Which highly-rated young defender’s injury is much more serious than first expected?

Don’t set the IQ
Collingwood v Carlton. Usually a highly anticipated match each season, this one could be a stinker given Collingwood’s season so far – and Carlton’s poor use of the football.