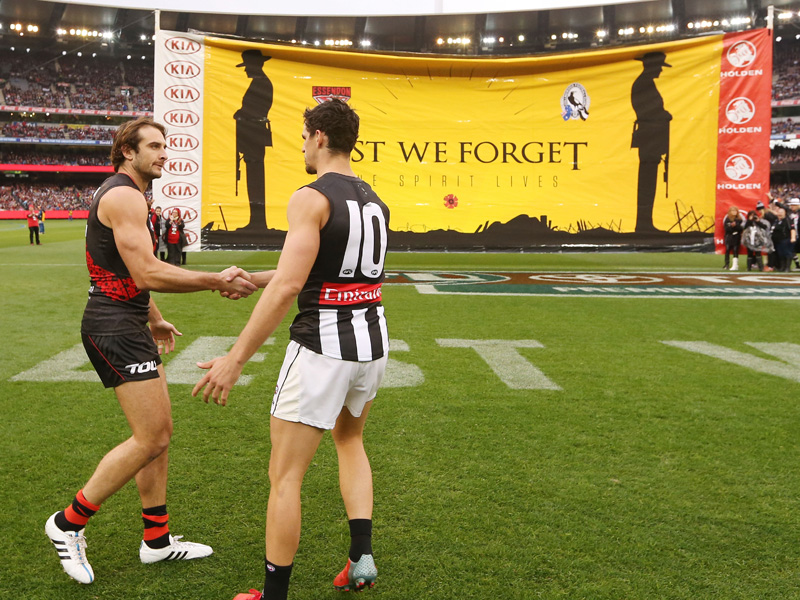 The Bombers and the Pies’ Anzac Day Footy Tattoo is about to hit the MCG again.

Given the form of both teams, it’s going to be difficult to find a player who epitomises the values of the Anzac spirit. But Essendon coach, John Worsfold, is doing his bit for the cause.

His boys are summoning the ghosts of the Anzacs as a motivational exercise.

After an early morning team meeting at the Shrine last Tuesday, Worsfold asked his boys to select a digger and delve into their war service. As Worsfold told AFL 360, “We’ve looked at some stuff around what soldiers do and they go away as a team.”

He even equated the Anzac experience with the Bombers’ current predicament.

“In a lot of these conflicts, especially the First World War, they were brought together as strangers six weeks out of fighting, untrained.”

Worsfold is correct. There wasn’t much time between enlistment and the trenches. But to equate this with the Bombers’ current troubles is the longest of bows.

Sport is not war.

Others were gassed and disfigured beyond recognition. They were all cannon fodder.

Though it is admirable that players explore the war service records of Australian soldiers, do it for the right reasons: to reflect on the barbarity of war, not to win a football game.

Worsfold’s exercise is even more astonishing given the Bombers’ predicament.

The diggers were recruited on short notice to fight a war. The current Bomber list was assembled because of a reputed illegal doping program.

There is no comparison. Peptides were not distributed on the Western Front or Kokoda.

Worsfold’s remarks reflect the cliché-ridden mumblings of coaches, players and footy talking heads around this time of the year.

How often have you heard a commentator suggest that a player has gone to help a “fallen comrade?” Nonsense! These so-called comrades are not dead. They have just been knocked over.

Many will live to sign another contract. The nonsense extends to the awarding of the Anzac Day medal to the player who best exhibits the qualities of the Anzacs.

No player comes close, because they have not been placed in a life-threatening situation. They are trying to win a game of football, before embarking on the day’s most courageous act, hopping into an ice-bath.

Worsfold’s remarks show the extent to which football often crosses the line on Anzac Day.

The AFL industry has hijacked the day from the diggers. This was clearly evident last year. Sporting events are not allowed to commence before 1pm.

The Blues-Saints game was beamed into Melbourne from Wellington at 11am on Anzac morning.

This paid lip-service to the bans on starts before 1pm. While the march was still under way in the AFL’s dominant market, Melbourne, the Wellington clash was being screened on pay-tv.

The commercial imperative of having football running from morning to night far out-weighed the day’s commemorative aspects.

Worsfold should reflect on the war records of former Essendon players.

Charlie Moore was the first of the Bomber and VFL fallen. He was shot by Boers in South Africa’s Orange Free State in 1901.

There’s Dick Clough who was killed at Gallipoli, and Lewis Blackmore and Fred McIntosh who died on the Western Front.

Then there’s Archie Roberts. He played for the Demons in the mid-1930s before joining the Bombers in 1937. He was captured by the Japanese at the Battle of Ambon in late 1941.

He spent three years in a Japanese POW camp, and died from abuse and neglect in June 1945.

“Three little words not hard to write, But there I’ll remember all my life. My pal, Archie.”

Rippon went on to manage pubs and become a football commentator. He even served as Essendon vice-president from 1950-56.

This memorial to his ‘fallen’ teammate reverberates with the real cost of war.

Woosha, Archie never made it to the ice bath. Your blokes will. They are only playing a game.

The problem with Anzac Day is that the game has become more important than the service and the march.

Increasingly, we choose to celebrate sport rather than commemorate the dead. We’ve forgotten Roberts’ death and Rippon’s grief. They are what war is really about.