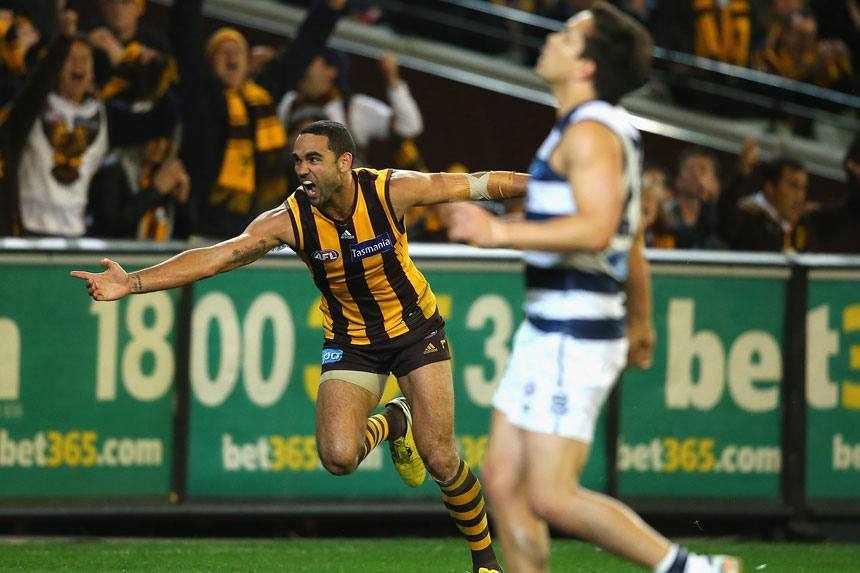 On Friday evening at the MCG, Hawthorn’s Shaun Burgoyne will become the 73rd player to feature in 300 VFL-AFL games. He has won four premierships at two clubs (Port Adelaide in 2004 and Hawthorn in 2013, 2014 and 2015) and is just the fifth Indigenous player to join the ‘300 Club’.

At the end of a disappointing 2009 season in which the Hawks missed the finals, coach Alastair Clarkson was looking to add some on-field polish to our playing list.

He identified Shaun as the priority target and, all of a sudden, I found myself caught up in a potential trade between Hawthorn and Port Adelaide.

• Stop right there, AFL. It’s time to leave the Grand Final alone
• Patrick Dangerfield’s exit has actually made Adelaide better
• Denis Pagan: there will be changes at Tigerland
• Campbell Brown: you’d be a fool to write off Hawthorn

I was offered to Port as a direct swap for Shaun but I didn’t want to leave.

I ended up staying another year at Hawthorn as, eventually, a complicated four-club deal got done to land Burgoyne.

It has proved to be yet another Clarkson masterstroke.

Our paths had never crossed until he arrived at the club, but I always admired Shaun from afar when he was at Port Adelaide.

He was an elite midfielder, who won All-Australian selection and a flag at Port.

When he arrived at Hawthorn, it was thought that if he could get three, maybe four, years out of his body – and in particular a degenerative knee – it would be a bonus.

The man known as ‘Silk’ due to his smooth skills doesn’t appear to be slowing down, either.

His impact at Hawthorn was immediate and has been enormous over the journey.

His leadership, durability, versatility and ability to perform when the side needs him the most is almost without peer.

Off the field, you will struggle to meet a more quietly spoken, humble and family-orientated person.

I’ve spoken with numerous Hawthorn players this week – and I asked them what stands out about Shaun’s time at the club.

They all said the same thing.

It was, of course, his performance in the the 2013 preliminary final against Geelong – particularly his last-quarter heroics to break the ‘Kennett Curse’.

Hawthorn were down by 20 points at three-quarter time against the Cats, who they had lost to 11 times in a row.

A spot in the Grand Final seemed very unlikely for the Hawks and they still trailed by three goals with just over 11 minutes left.

It was then that Shaun’s desperate tackle on Jimmy Bartel forced a turnover, and Bradley Hill booted a goal.

He then beat Andrew Mackie in a crucial one-on-one contest just outside the goal square and handballed to Jack Gunston, who kicked truly, cutting the margin to five points.

And Shaun wasn’t done yet, kicking Hawthorn in front with what would prove to be the last goal of the game with five-and-a-half minutes left.

He finished with 24 disposals and three goals in a truly match-winning performance. It’s what Hawthorn people will always remember him for.

For Port Adelaide fans, they will never forget his diving smother to prevent a certain Brent Guerra goal in the last minute of the 2004 preliminary final against St Kilda.

The Power won by six points to reach their first ever AFL Grand Final – which they won.

A man for big moments

Those examples just prove why Shaun will go down as one of the great big-game performers of all time.

In pivotal moments, when the game is in the balance, some players go missing. Some can’t handle the pressure. And some rise to the occasion.

They deliver their absolute best and thrive in the big moments. Shaun Burgoyne has made that an art form.

And he’s done it across all three lines of the field.

He kicks the big goals, he wins the clearances when his side needs it and he lays the game-saving tackles.

Cast your mind back a couple of weeks to Hawthorn’s thrilling win over the Western Bulldogs.

James Sicily may have kicked the match-winner, but it was no surprise to see the man who got the ball, charged forward and kicked it inside 50 was Shaun Burgoyne.

Yes, plenty of players in today’s game get more of the ball than him.

But few are as damaging and hurt you as much.

Shaun Burgoyne is a champion. And his nickname should be changed – from ‘Silk’ to ‘Clutch’.

How the Hawks almost missed out on Burgoyne