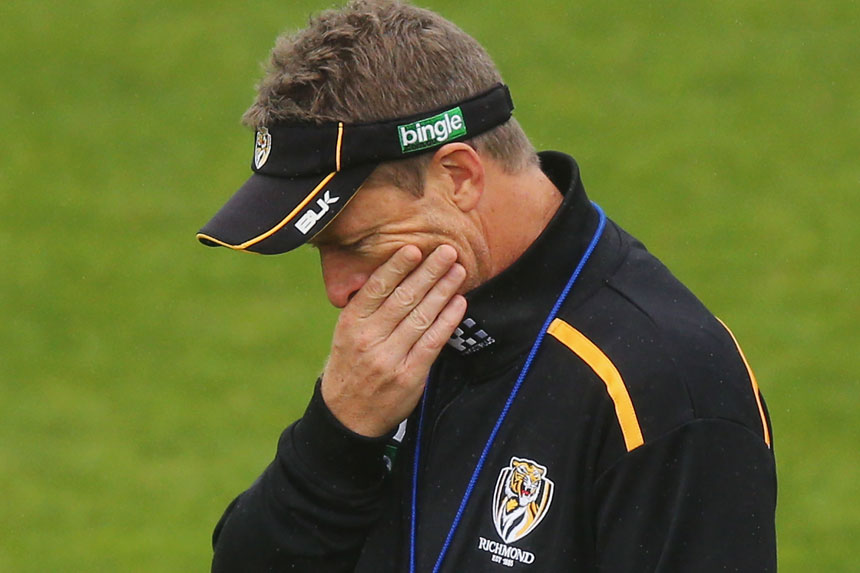 There are only two types of coaches in the AFL. Those sacked, and those about to be sacked.

I don’t know exactly what’s going on at Tigerland.

But what I do know is that if you keep serving up unsatisfactory performances, there is going to be change. It’s as simple as that.

• Fremantle coach Ross Lyon is facing a new challenge
• This was the moment no footy fan wanted to see
• Brownlows, Bloods and boos: remembering Adam Goodes

Sure, there’s been a pattern in recent years of the Tigers starting poorly and coming home hard but I just think there’s a situation where the same problems keep rearing their ugly head.

They can’t deliver when it is required.

Are they as playing as a team? Are they playing too slow? Do they have enough good kicks across the half-back line?

I think their disposal is often poor in the back half.

And I certainly think they play too slow. I wouldn’t like to be playing forward in that team.

There’s only one thing that matters in the AFL and that’s the scoreboard.

If you’re not winning enough, there’s going to be changes. And that’s what is going to happen.

Opportunity beckons for the Kangaroos

I’m loving the footy we’ve seen dished up so far.

Some of the games have been sensational – the Bulldogs against Hawthorn was a cracker.

I love watching North Melbourne and Adelaide play, too.

Footy at the moment is certainly exciting to watch.

He’s 38 next month and I ask myself: how can he continue to do it? It’s just freakish.

Drew Petrie is having an impact, too, and North’s destiny is going to be determined by those guys and others like Nick Dal Santo, Daniel Wells and Scott Thompson.

If they stay well and on their feet, North are a chance to get there on the last day of the season.

There’s a real opportunity this year for North – and they’ve got to seize it.

Getting home finals is the key for North.

The last couple of years, they’ve gone interstate and eventually bombed out.

It’s a good thing that the interchange cap has been slashed and hopefully it leads to more genuine one-on-one contests like Todd Goldstein’s battle with Max Gawn last week.

I can remember watching a game at the MCG and a Melbourne forward kicked a goal in the first 12 seconds.

Then they took him off the ground. What about his confidence?

If I was playing and that was me, I would not have been happy.

Thankfully, the changes have stopped that and the good players are staying on more and going forward for a rest.

I’m sure the rotations finished off Anthony Stevens, one of my ex-players. He wanted to stay on all the time.

While the tweak with the interchange has been good, I reckon we should go back to the common sense rule for deliberate out of bounds.

Blatant ones, sure, pay it, but when you’re not sure, and you’re only paying them because there’s been a focus on it from above … I really don’t like that.

They are paying deliberate for bad bounces of the ball. We play with an unusual shaped ball and it’s going to go sideways sometimes.

This is where umpires have to understand the game.

I’m not sure they are doing that at the moment. Denis Pagan: there will be changes at Tigerland