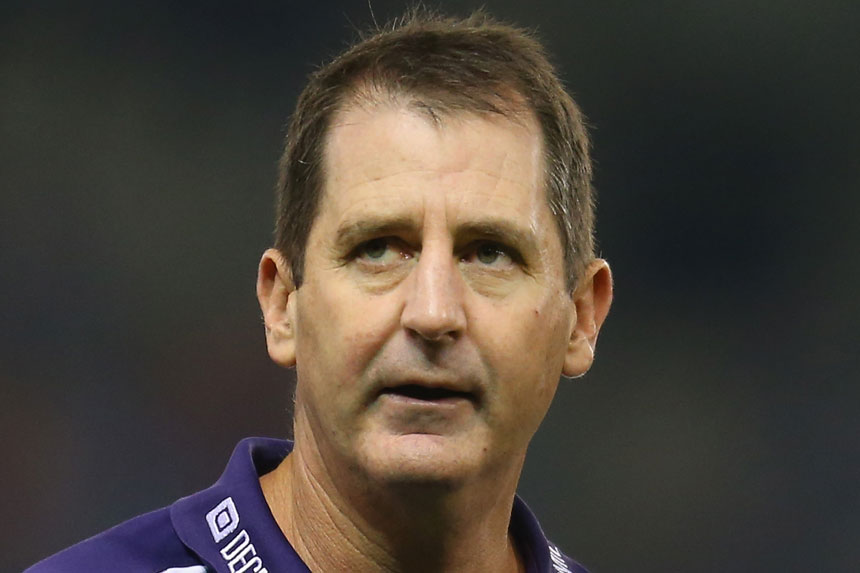 Some say Ross Lyon is the best coach to have never won a VFL/AFL premiership.

In his nine seasons in charge of St Kilda and Fremantle, he has missed the finals just once, with his sides reaching Grand Finals in 2009, 2010 and 2013, only to lose all three.

Lyon’s record in the home-and-away season – 201 games coached for 134 wins – is outstanding but the jury remains out on one thing.

• This was the moment no footy fan wanted to see
• Brownlows, Bloods and boos: remembering Adam Goodes
• ASADA denies vendetta against the Bombers

It’s a challenge he has to face – and conquer – if Fremantle are to achieve the ultimate success.

Wholesale changes aren’t needed at Fremantle, more tweaks, but Lyon needs to make them, particularly with the Dockers at 0-3 to start the 2016 season.

In late 2006, when Lyon took over from Grant Thomas at St Kilda, he inherited a playing list full of experience and talent.

Less than three years later, the Saints were in a Grand Final against Geelong.

They lost by just two goals, and the bounce of a ball cost them a 2010 Grand Final win against Collingwood – and forced a replay which they were thrashed in.

After St Kilda’s finals exit in 2011, Lyon saw the chance to move.

He knew the Saints’ list was starting to age – and that he had developed little-to-no young talent.

So he walked, joining another club with a list ready for sustained success in Fremantle. All they needed was the right coach.

Again, Lyon saw his team rise up the ladder and reach a Grand Final – and again they just went down.

Fremantle would have beaten Hawthorn in the 2013 showpiece if they had kicked straight.

Like the Saints in Lyon’s tenure, Freo’s list is ageing quickly and there’s not a whole host of young talent demanding to be picked.

And this year marks the first time that Lyon has started a season 0-3 in his coaching career.

They haven’t replaced key defender Luke McPharlin and have just lost ruckman Aaron Sandilands (punctured lung) for a significant portion of the season.

Ex-captain Matthew Pavlich will almost certainly retire at the end of the year, and you would think Sandilands will follow suit.

And despite their efforts, they are yet to land a big-name key position player.

Lyon simply must get Essendon’s Cale Hooker over the line in the off-season to address their defensive issues.

But the coach, who has a contract at the club until 2020, needs to do more in his attempt to rebuild.

Denis Pagan, who won two premierships as North Melbourne coach, still thinks he is the right man for the job.

“Ross Lyon is an elite coach,” he told The New Daily.

“I think with him in charge, Fremantle will remain up there.

“There aren’t many other coaches who have achieved what he has in home-and-away football.

“I certainly haven’t given up on him and the Dockers. They’ve had a bad run with injury but they are still a good side.”

The true measure of a great coach shouldn’t be based solely on the number of premierships they have against their name, or home-and-away wins, but their ability to rebuild their club’s playing list as well.

One gets the feeling that the next couple of years will define what sort of coach Ross Lyon really is.