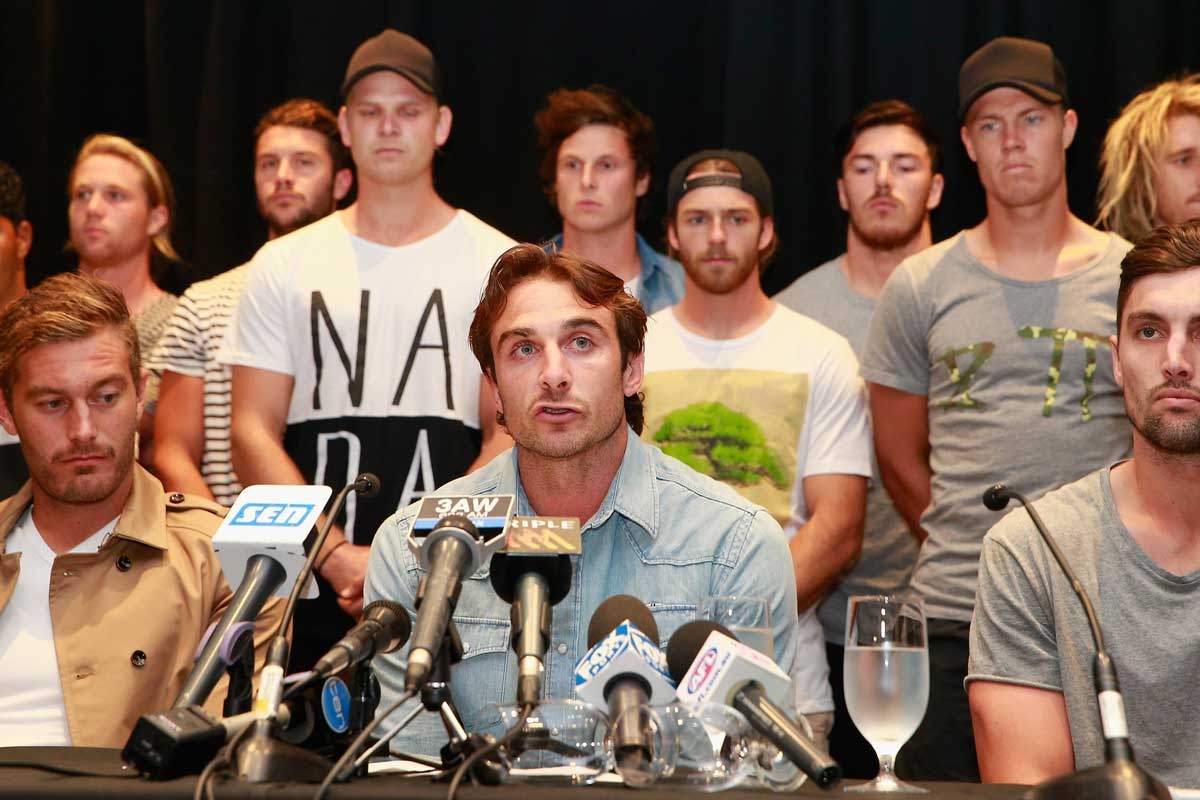 A verdict was reached.

In March this year, the AFL’s anti-doping tribunal concluded that it wasn’t “comfortably satisfied” that “the Essendon 34”, as they’re described on the AFL website, had violated ASADA and the AFL’s rules regarding performance-enhancing drugs.

Six months later, in August, WADA lodged its appeal to the Court of Arbitration of Sport (CAS) against this finding.

Now, with Christmas upon us, the second verdict is imminent and it’s difficult to see anything more substantial than whim guiding the three-man panel to a different conclusion.

If media reports are accurate, the only new evidence on offer is the belated discovery of “abnormally high” amounts of a banned substance, thymosin beta 4 (TB-4), in the urine samples of two of the accused players.

CAS has to decide if this is sufficient circumstantial evidence to indicate something illegal was going on at Essendon, or if it’s simply an aberration.

Obstructing any clarity on the matter is (a) the scientific fact that TB-4 occurs naturally in the human body, sometimes at elevated levels, and (b) the fact that players from other AFL clubs tested in the same batch but not charged with drug-cheating were also found to have “abnormally high” TB-4 levels.

As they say, the jury is still out.

But maybe the issue should not be whether illegal amounts of TB-4 were in the players’ systems, but if (a) the substance is actually performance-enhancing (as it happens, the scientific jury is out there too), and (b) the players (or the club, unbeknownst to the players) deliberately set out to cheat by using it.

Since the reason why it’s important to rid sport of performance-enhancing drugs is because it’s cheating, giving some athletes or players an unfair advantage over their rivals, maybe it’s time to go back to basics, as commentary teams love to say.

Instead of simplistically asserting that sports people have to be held accountable for whatever goes into their body, maybe we now need to look past the mostly blinkered media reports regarding “the supplements saga” and ask some new questions.

As it currently stands, if an athlete tests positive for a forbidden substance, regardless of how it got there, or if, in the absence of a positive test, there’s clear evidence that he or she has been injected with or consumed said substance, punishment will be forthcoming.

How on earth can this be fair? Surely the onus needs to be on the prosecutors to prove their case against the accused: firstly, to show that the substance is actually performance-enhancing, and, secondly, to demonstrate beyond a reasonable doubt that the accused knowingly and willingly consumed it.

That’s what cheating is: whether you’re playing football, cricket or cards – it’s all about intention.

The AFL endorses WADA’s rules, and tests are randomly conducted to ensure that nobody is breaking them. It all sounds very simple. But is it just?

What if the accused footballers have no intention of cheating but have ingested something – a protein powder, say, or a pill, or even a line of cocaine snorted during the off-season – that results in a positive test? How does that make them “drug cheats”?

There are some who knowingly and deliberately set out to violate the codes of conduct set down by the AFL, from club administrations that breach the rules of the salary cap to players who regularly stage for free kicks.

That is cheating. It’s not something anyone can do inadvertently.

But, to date, only Richmond’s Justin Charles has pleaded guilty to deliberately taking a performance-enhancing drug, an anabolic steroid.

His confessed goal was to hasten his recovery from a torn muscle. Under current rules, this qualifies as cheating, although perhaps, in time, it will be regarded less severely.

Suspended in 1997 by the AFL for 16 matches, he told ABC reporter Ben Knight seven years later that he knew he broke the rules but still didn’t believe he’d done anything wrong.

“I certainly don’t feel guilt about doing something that would help my health. I knew I was running a risk of getting caught and suspended and I took that risk, but guilt? No. Certainly not.”

However, the inadvertent consumption of a substance that is, for one reason or another, on WADA’s banned list should be another matter altogether.

It might be a sign of the need for players to take greater care over what they allow to enter their systems, but it is not cheating.

He’d tested positive for methadone, which was, apparently, an ingredient in a painkiller he’d taken to relieve the symptoms of his chronic back condition. On the advice of a health professional outside the club.

“I think everyone feels the penalty was about right,” AFL CEO Gillon McLachlan told ABC News Radio, and it would seem nobody disagreed.

There were no voices of protest from the football “insiders” afterwards.

No outraged columns condemning the fact that rights available to any other citizen of the country had been overridden by The Rules.

Yet what exactly was Crowley’s crime?

It seems that nobody was accusing him of actually committing one, of being a cheat, of deliberately setting out to gain an unfair advantage.

McLachlan went on to say that “the tribunal know there was no intention to get any performance-enhancing effect”, conceding that “technically he could have actually got zero”.

So why didn’t he?

On the AFL website, Dr Peter Larkins said Crowley had been “banned on the basis that, if you’re trying to mask pain to play sport, the WADA rules have said that it’s not healthy to mask pain of that severity”.

So WADA and everybody else were simply trying to help Crowley to look after himself better?

If so, that’s certainly an admirable goal, but then why hasn’t closer attention been paid to the “jabs” routinely administered to enable players to see out a game?

Clearly, there’s a problem here to do with definition.

Alarm bells should have started ringing a couple of years ago that The Rules were in urgent need of reconsideration when St Kilda player Ahmed Saad was suspended for 18 months having tested positive for a partially forbidden substance after consuming Viking Protein’s Before Battle protein powder.

It contains a plant-based substance known as methyl synephrine, also known as “bitter orange”, a minor stimulant which is on WADA and ASADA’s list of match-day verbotens. That is, players can take it for six days a week, but need to give it a rest on the seventh.

Saad had used the product regularly, swore that he didn’t know it was forbidden before a match and argued, quite reasonably, that he hadn’t set out to cheat.

And, if ever a case called for a gentle rap over the knuckles and a firm don’t-you-ever-do-it-again warning, this was it.

But ASADA went on to appeal the lack of severity of the sentence, arguing that Saad should have been rubbed out for two years.

According to former ASADA chairman Richard Ings, “the general rule is that 18 to 24-month bans are a win where no intent to dope exists”. So, given the way the rules stand at the moment, Saad should regard himself as having been lucky.

Instead of coming up with Draconian decrees more attuned to the medieval era than the modern day, it’s time for anti-doping agencies, the administrators of the game and the columnists who want to guide our thinking, to remember that players are human beings with rights.

There is no such thing as cheating without the intention to cheat.

WADA’s website boasts that its Code “was never designed to be a document that stood still”.

So maybe it’s time to get it moving. Why only a whim could find the Bombers guilty