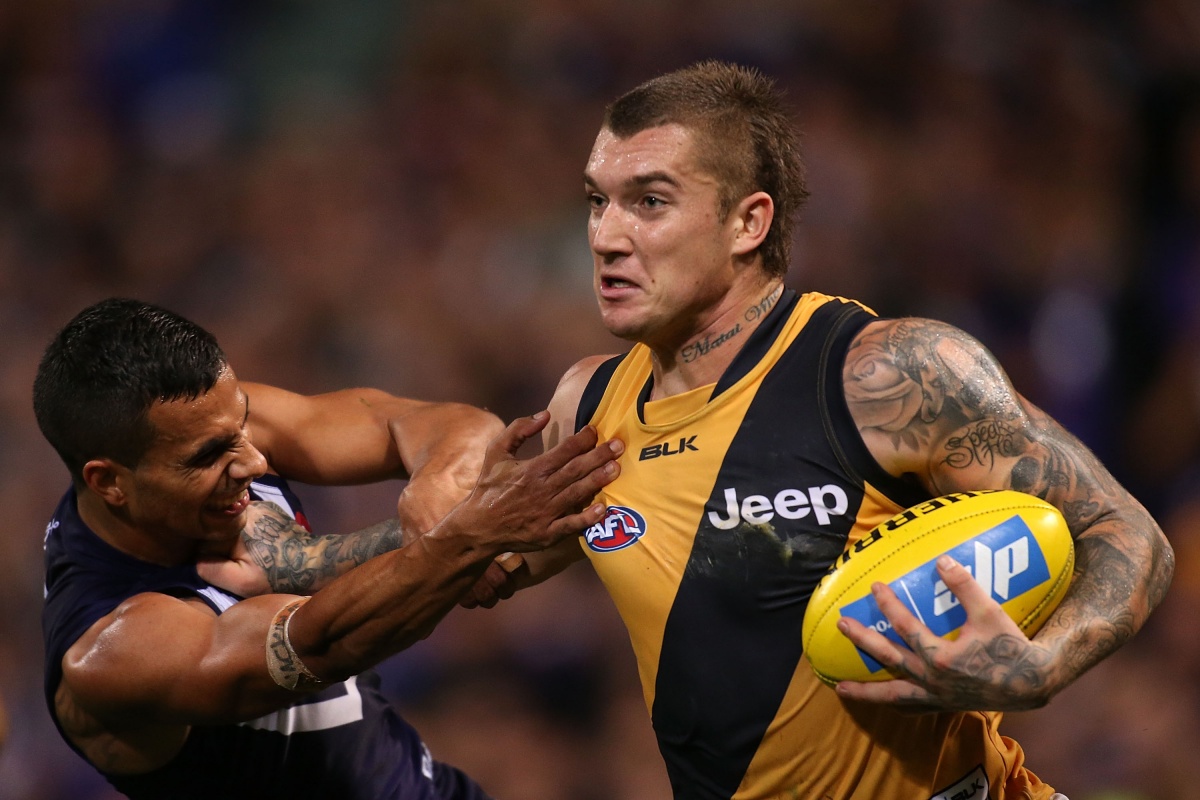 The reaction to Dustin Martin’s threatening behaviour towards a woman at Melbourne restaurant Mr Miyagi tells us we have a lot more work to do.

In amongst justifiable anger there have been jokes about The Karate Kid, cries of over-reaction and the all-too-familiar victim blaming.

Richmond football manager Daniel Richardson described the incident as a “bit of a hiccup”.

• Buddy: I’m looking forward to getting back
• How your club fared in the 2015 AFL draft
• Magpies youngster needs knee reconstruction

It’s more than a hiccup and it should be treated as such.

The midfielder was asked to leave after he became aggressive when the woman asked him to tone down his drunk, loud and offensive behaviour.

“He reacted extremely angrily and was very agitated, he began swearing at me and standing over me physically. It was extremely intimidating,” she told Channel Seven.

“He physically stood over me and held a chopstick above my head and threatened to stab me in the face with the chopstick.”

Whether he was waving a chopstick, a plastic flower or a napkin – it doesn’t matter. There is no place in society for this kind of behaviour.

Perhaps Martin needs to read up on the violence against women epidemic in this country.

The AFL’s Respect and Responsibility training clearly hasn’t sunk in.

The statistics, as we keep repeating, are shocking.

One woman is killed by a current or former partner almost every week in Australia. (Some research suggests this rate is higher.)

One in three has experienced physical violence since the age of 15.

Women in Australia are three times more likely than men to experience violence at the hands of a partner.

Almost half of the women who experienced violence by an ex-partner said children had seen or heard the violence.

It’s time for our sporting codes to get serious about violence against women.

Our nation is finally starting to tackle this problem, from the Prime Minister down.

Richmond and the AFL must strongly condemn this behaviour.

The Tigers said on Monday afternoon Martin’s apology to the woman had been accepted.

“Regrettably, I was intoxicated and that in itself is completely unacceptable,” Martin said.

“I do, however, take responsibility for my behaviour and I am deeply embarrassed.

“If anything I have said or done has caused anyone to feel threatened then that is totally inappropriate.”

Using the word “if” is not taking responsibility.

It’s something we hear over and over again when highly-paid sportsmen are put in this position. Using alcohol as an excuse is also a cop-out.

Footballers are given more education about respect and responsibility towards women than most other young men in society. They are role models whether they like it or not.

Richmond is a club that takes gender equality seriously.

On Tuesday afternoon, Tigers chief Brendon Gale issued another statement, this one stronger.

“This is a very serious matter that requires a thorough investigation and we are working with the AFL to ensure we have all the facts before us,” he said.

“I want to be clear that any threat of physical violence against a woman – or any member of the public for that matter – is completely unacceptable.

The Tigers are one of sport’s “Male Champions of Change” after they commissioned a research paper on gender inequity in Australian football, with the support of The Australian Sports Commission and the AFL.

“The Male Champions of Change model asks men to step up alongside women to drive meaningful change,” former Sex Discrimination Commissioner Elizabeth Broderick said when launching the program in May this year.

“This strategy recognises that most organisational power sits with men and they must be integral to delivering change in their organisation and advocating for it more broadly.”

I hope the Tigers really are male champions of change. Why Richmond needs to man up on Dustin Martin