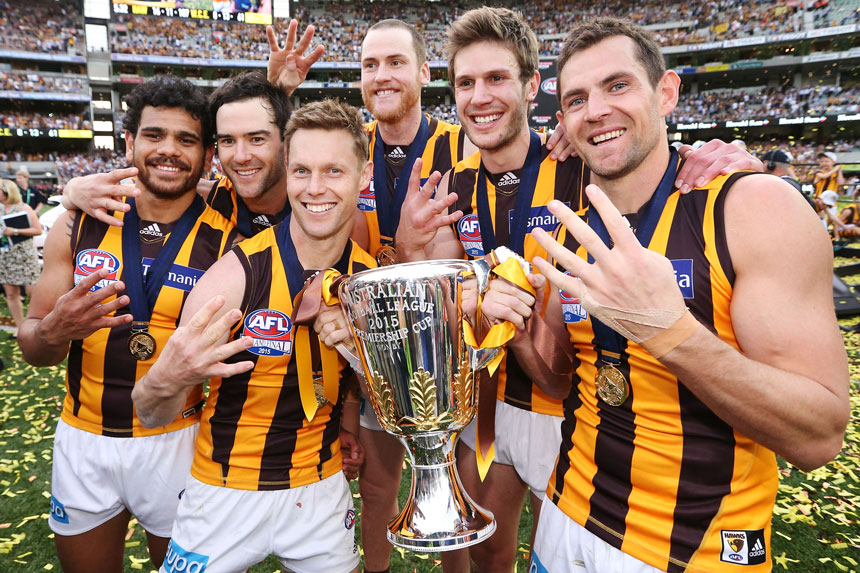 The lure of an historic fourth straight AFL premiership isn’t what is driving veteran Hawthorn star Sam Mitchell this off-season, even if it would confirm his team’s place as the best ever.

Mitchell turned 33 shortly after Hawthorn’s crushing grand final defeat of West Coast but is refusing to let age slow him down and is coming off arguably his best season.

• Peter Senior’s Masters moment is one for the ages
• Alvarez beats Cotto to win middleweight title
• Farewell Red Cadeaux, most human of equines

The most AFL/VFL premierships won consecutively is four, by Collingwood from 1927-30, however it is widely accepted that should a team of the modern era match that feat, it would surpass it for quality due to the cut-throat nature of the sport in the current day.

Still, Mitchell says while discussing the four-peat is not a taboo amongst Hawthorn’s playing group it isn’t the force which is pushing him into a 15th AFL season.

“It’s not a taboo. You are allowed to mention it if that’s what your motivation is,” he told AAP after playing in Australia’s International Rules defeat to Ireland in Dublin.

“It’s certainly not mine. I’m just worried about today and what I can do to get better.

The likes of captain Luke Hodge (31), Mitchell (33), Josh Gibson (31) and Shaun Burgoyne (33) have all passed 30, while Brian Lake and David Hale both announced their retirement last month.

Mitchell will get another week off with his family before returning to the Hawks’ pre-season training where he says he will do “between 85 and 95 per cent” of the sessions – crediting a “reasonably reslient” body for helping him deliver so consistently for a decade and a half.

And, when push comes to shove, he feels there are few who can keep pace with an in-form Hawthorn.

“We feel like our best footy is as good as anyone’s best footy,” he added.

“There’s a lot of water to go under the bridge before even this season starts.

“We don’t know how we’re going to play yet. We haven’t caught up as a group.

“We haven’t sorted everything out. And we don’t do that until March really, when we start practice games.

“But we feel like we’re still in a position where we can be competitive against the best.

“All you can do is try to aim top four, and if you get yourself into the top four often enough then sometimes the door will open.”

Mitchell: Hawks not driven by history