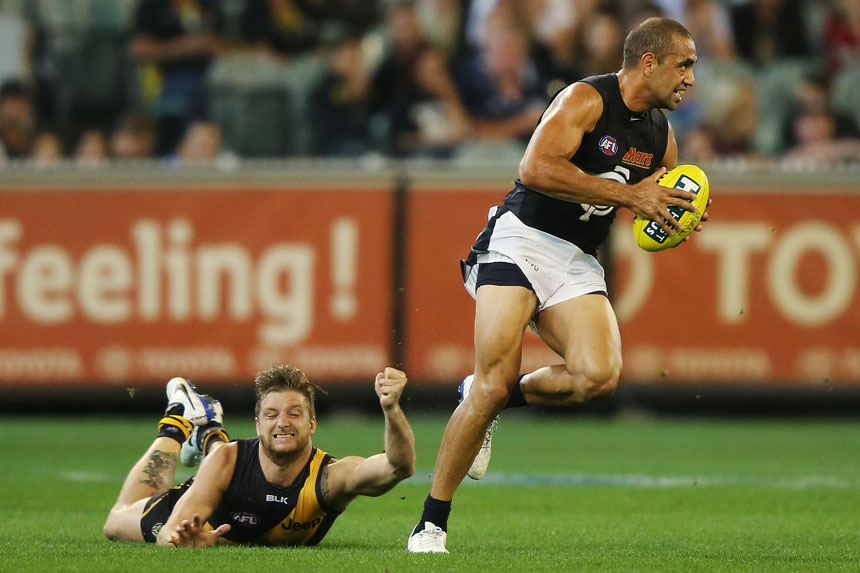 Chris Yarran’s move to Richmond was finally approved in the latter stages of the AFL trade period.

Yarran’s departure from Carlton was confirmed on Thursday when the Blues relented and swapped the speedster for pick 19 in this year’s national draft.

Earlier in the trade period, Carlton were adamant they wanted Richmond’s pick 12.

• New Saints recruit Jake Carlisle sorry for ‘mistake’
• Why the AFL’s free agency system has got it all wrong
• If you thought the footy season was over, think again

Yarran, taken at pick six in the 2008 national draft, played 119 games for the Blues and kicked 90 goals.

“We clearly targeted Chris early in the trade period, as a player we believe will add great value to our playing list,” he said.

“We’re pleased to have completed a trade to get him to the club, and we look forward to him settling in at Tigerland.

“He will be 25 years of age when the 2016 season begins and we believe his best football is still ahead of him.”

Yarran’s deal was the headline move on the final day of the trade period, while Collingwood were pleased with the arrival of James Aish.

The Magpies gave pick 26 and a future second-round selection to the Lions to secure Aish, while North Melbourne and Collingwood also exchanged a series of draft picks.

That allowed the Kangaroos to facilitate a swap with Brisbane, as Ryan Bastinac crossed to the Lions – with an exchange of picks also involved.

“James is a very skilled young player who uses the ball extremely well on both sides of his body and makes good decisions in heavy traffic,” he said.

“At the age of 19, we see James as a long-term player with huge room for growth.”

It marked the end of a busy trade period for the Magpies, who brought in Adam Treloar from GWS and Melbourne’s Jeremy Howe as well.

And there were swaps of draft picks between GWS and Collingwood, Fremantle and Gold Coast, Carlton and the Western Bulldogs and Hawthorn and GWS.

Young GWS forward Cam McCarthy remained at the club despite speculation linking him with a move to Fremantle.

Yarran and Aish get new homes as trade period ends