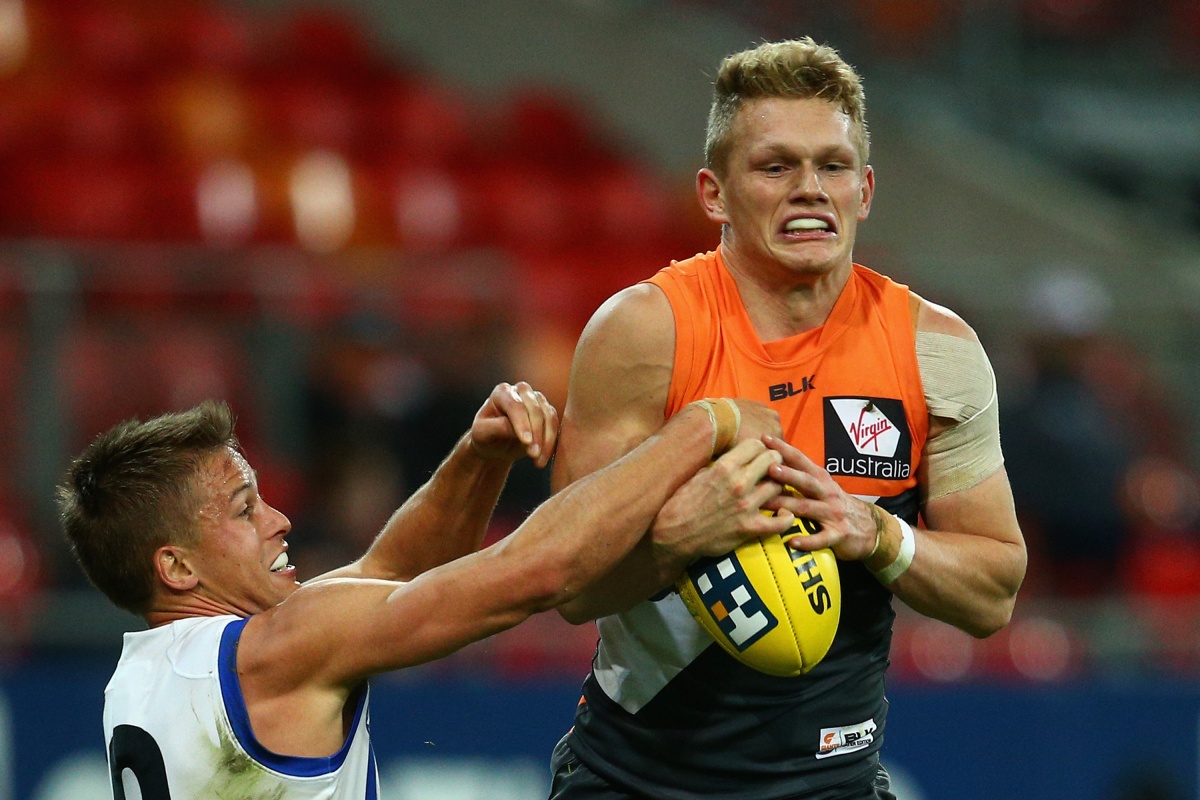 The day didn’t start well for the Magpies with an embarrassing leak of a video of Treloar, in their club’s colours signing a contract, appearing online before a deal had been finalised, but they eventually had their man.

• Why do our sports stars go crazy on the grog?
• The AFL’s free agency system has got it all wrong
• If you thought the footy season was over, think again

The Pies gave up picks No.7 and No.65 plus a first-round pick in the 2016 draft to recruit Treloar, who finished second in GWS’s best and fairest this year.

The Giants also shipped off pick No.28 in the exchange.

Collingwood list manager Derek Hine was thrilled to recruit a 22-year-old who would be part of the “side’s core midfield over the next decade”.

“Adam has established himself as one of the competition’s most-prolific young midfielders,” Hine said.

GWS football manager Graeme Allan made no apologies for the protracted trade talks.

“Negotiating a trade like this can take time but, as a result, we’re pleased to have secured the best possible outcome for the Giants,” Allan said.

“First-round selections are obviously highly sought after so to receive two as part of this trade is an outstanding result for our club.”

Treloar is overseas, which is why the Magpies wanted to pre-record his message for fans. The involvement of Sydney proved the circuit-breaker between the Saints and the Bombers that allowed Carlisle, 24, to get his desired move.

Essendon secured pick No.5, a selection they had demanded in a straight swap for Carlisle, and snared Swans midfielder Craig Bird as well, while St Kilda also landed Sydney’s first-round pick (No.14) in the deal that involved an exchange of lower draft selections between the clubs.

“We’re really pleased to bring Jake in while keeping a pick in the first round,” St Kilda football chief Ameet Bains said from AFL House.

“I think everyone’s a winner in this deal.”

In other trade news, Carlton pulled off deals that brought in Lachie Plowman, Jed Lamb, Liam Sumner and Andrew Phillips from the Giants, along with pick No.8, and Sam Kerridge from Adelaide.

The moves came at a cost, however, with the Blues shipping fan favourite Troy Menzel off to the Crows to get the deal done.

Melbourne finished the day with GWS midfielder Tomas Bugg and picks 3 and 7 after some shrewd work behind the scenes, while veteran West Coast onballer Matt Rosa crossed the country to join Gold Coast, with the Suns sending pick 31 the other way.

With just hours left before the transfer window closes, Chris Yarran’s switch from Carlton to Richmond and James Aish’s move from Brisbane to Collingwood are the major deals that remain up in the air.

Spain and Portugal see major leaps in monkeypox infections
Volodymyr Zelensky: How war will end as Ukraine ‘breaks backbone’ of Russian army
Jim Chalmers decries Coalition waste as Labor hits the hustings amid downpours in Queensland
Anthony Albanese, Scott Morrison cast their votes in Sydney
Australian aces at French Open out to show there’s life after Ash Barty
US keeps COVID-19 rules to stop migrants from crossing border
Why do our sports stars go crazy on the grog?
Today's Stories