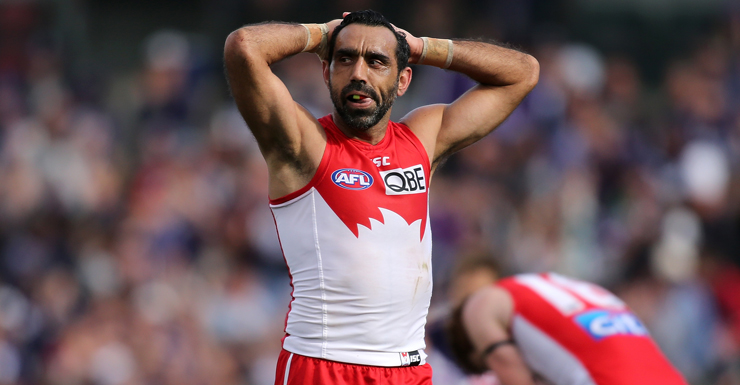 Adam Goodes has given his first media interview since retiring from the AFL, speaking to a student newspaper about racism, his plans for the future and his decision not to do a lap of honour on grand final day.

The dual Brownlow medallist told Sydney University’s Honi Soit newspaper he was “done” with football when he retired after Sydney lost the semi-final to North Melbourne and wanted to make his farewells in a “safe” environment.

Goodes has kept a low profile since retiring, opting against the MCG lap of honour for retired players and also asking not to be nominated for the AFL’s Madden Medal for on and off-field contribution.

He bade farewell to his supporters at the Swans’ best and fairest award last weekend.

“I didn’t want, once I’d finished footy, to be part of any other things that I had a choice in,” he told Honi Soit’s indigenous reporter Georgia Mantle.

“At the end of the day, it was my choice not to be nominated for the Madden Medal.

“I had my last football responsibility at the club best and fairest and that’s what I was looking for.

“It was my supporters, my members, at that event, and you know it was a very safe environment for me to go to and give my sendoff to the people that mattered.”

The booing that plagued his final season was “one of many reasons” he chose to retire, making the decision two months before his final game.
There was a lot of factors, Goodes said.

“And obviously with all the booing and everything, that was another piece of the puzzle that made my decision quite easy,” he said.

Goodes plans to spend the next two months overseas before returning to Australia to continue his fight against racism and domestic violence, and in support of constitutional recognition for indigenous Australians.

Adam Goodes: booing was a reason I quit