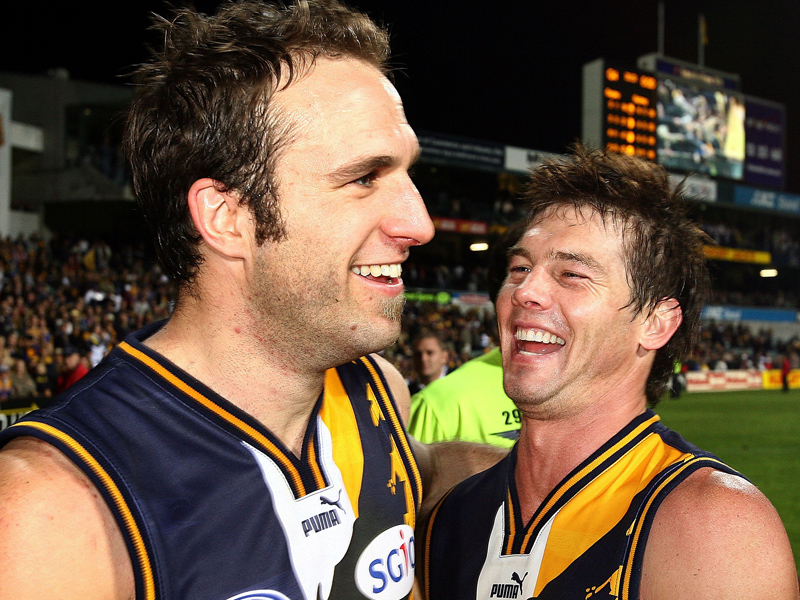 Judd, who played alongside Cousins at the Eagles from 2002 to 2007, said he was concerned Cousins’ off-field battles would cost the team a chance at a flag.

He also lamented how Cousins’ career had become an ‘enormous waste’.

In an extract published by News Corp of Judd’s new book, Inside: The Autobiography, he talks about Cousins’ spiral out of control, the AFL’s handling of the matter and what they could have done better.

Part of the autobiography focuses on his time with Cousins at West Coast, where both midfielders won a Brownlow Medal.

In 2006 they revelled in the team’s one-point defeat of the Sydney Swans to win the 2006 AFL premiership.

It was about then that the cracks began to show. Judd left the Eagles to join Carlton after the 2007 season.

“The 2004 season was a seminal year in the West Coast story, and in my development,” the extract begins.

“The three best players at the club were Ben Cousins, Daniel Kerr and Michael Gardiner.

“In 2004, my role became more established. Cousins, Kerr and Gardiner were the larger-than-life figures at the club, and I was one of a group of emerging players, also heading towards the elite, but with a more stable personality, which provided a counterbalance.”

Judd said that it was just after the Eagles had won the 2006 Grand Final that he could start to see the effects of Cousins’ drug addiction kick in.

“Cuz [Ben Cousins] was the captain, and the biggest influence in the place – on me, and on the rest of the playing group,” he wrote in the book.

“Even before I fastened onto the importance of diet, he was a zealot about it. He wouldn’t touch sugar in any form.

“He would drink coffee, Diet Coke and water, but wouldn’t go near a sugar drink like Powerade except on game days, when he knew it was useful for the sugar hit.

“He was paranoid about his weight, and would monitor it constantly. He was forever on the scales.

“Every decision he made in life was with the goal of playing better footy.

“I suspect that he would argue that his drug use was a form of control for the betterment of his football.”

Judd added that Cousins’ personality was such that he went a million miles an hour – but he did not have a coping mechanism. Drugs provided that, he said.

“I didn’t idolise him, but I did learn plenty from him,” the extract read.

“In his first seven or eight years at West Coast, Cuz gave all of himself to the club. Whatever partying he did was in private, and had no impact on the group.

“There were no incidents; he was not a figure of derision. Cuz had contributed valuably to West Coast before he ran off the rails, and had earned a degree of sympathy and loyalty, which he got.

“But by 2006, Cuz and his off-field battles were becoming problematic for the entire playing group. The impact of his addiction was beginning to show, changing him, but he had little awareness of the debilitating impact it was having on the club as a whole.

“As the captain, it was my job to help manage him.”

Judd said he slowly started to see cracks forming in Cousins, as his addiction took hold.

“I was left with conflicting emotions towards Cuz during that time. On one hand, I recognised his enormous desire for success had been the driving force that led many of us to perform at a level where success became a possibility for us all,” he said.

“On the other, Cuz the drug addict was now posing a threat to the culmination of the football club’s mission, and my childhood dream.

“His welfare should have mattered above all else. Now when I look back, I feel a lot more sympathy for Ben Cousins than I did at the time. I see the grey at last.”

Judd said while reflecting on Cousins’ career he saw an “enormous waste” – for Cousins, the club and the football community.

“The AFL industry prides itself on tackling and educating the public on big issues. But in this instance, its attitude was bombastic and authoritarian – it would stamp this out, come what may,” he wrote.

“No one ever asked how it had come to this, why footballers were battling such addictions.

“Ben got plenty of media attention, but his issue got none. When I look back and try to discern in the community any lessons taught or learned from what happened to Ben Cousins and from the West Coast years, I can’t see any.”

Judd said he was concerned about a worse problem than illicit drug addiction that was now plaguing the AFL.

“The gambling problem lies below the surface because, outwardly, it does not conflict with or interfere with a footballer’s capacity to play the game as obviously as drug use does,” he said in the extract.

Chick told News Corp that strong asthma pills like Xanax, Sudafed, Stilnox and Valium were just some of the drugs sometimes provided through the Eagles that were used by several players.

The extract was published by News Corp from Inside: The Autobiography by Chris Judd (Allen & Unwin, $39.99), to be released on Wednesday.

‘Paranoid’ Cousins was a threat to Eagles’ mission